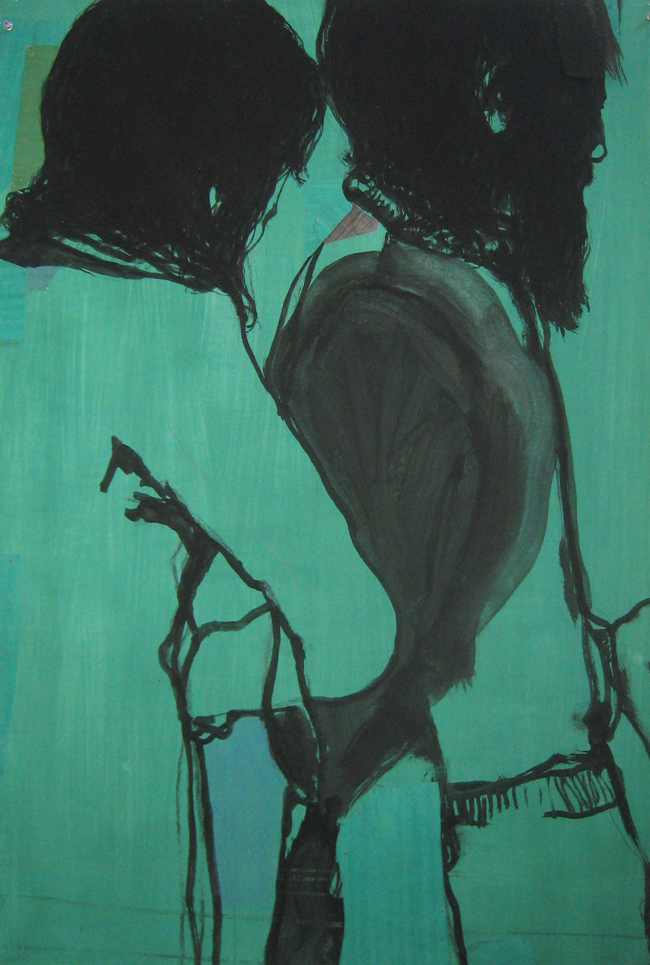 The comparison of works from different periods, which simultaneously work on different levels, is a common practice in the work of Jean Charles Blais. His work is informed by the diverse application of the medium, by using the couture as drawing or painting. With the help of digital media, billboards and other graphics emerge.
An earlier exhibition by Jean Charles Blais, which was shown in 1998 in the Bawag Foundation, already brought together two levels of his oeuvre. The series of works „sur mesure“ („Tailor-Made“) is half object and half sculpture. It creates a hypothetical wardrobe, which has been reduced to fragments and arranged on large black surfaces with paint and chalk. For his current exhibition in Vienna, Blais has expanded his body of work through the presentation of large format paintings, new cut and rearranged posters as well as gouache paintings. These new works fit into his figurative repertoire, whose fascination lies in the various layers of paper. It seems that the memory of forgotten forms, which were present in early works from the 80s, have been rediscovered. The polysemy arises through incessant metamorphoses, which play with the staging of the body and ambiguity. Forms are created, which arise from the concurrence of depth and surface – modern, unique, consistent and elusive.
And so the theme of this exhibition is the connection of these individual forms and their interaction. One looks for the empty forms, which emerge as memories of an absent body only to immediately disappear again.
Jean Charles Blais’ body of work abounds with art historical references, touching on the work of artists such as Henri Matisse, Kasimir Malevitsch and Philip Guston. He uses this as the basis to develop his own, distinctive artistic lexicon to portray the human body, which in his newest works in particular is emotionally deeply compelling. Paintings by Jean Charles Blais have recently been on show at the Cabinet d’art graphique, Centre Georges Pompidou Paris, at the Pinakothek der Moderne Munich, the Musée d’art moderne et d’art contemporain Nice, the CAPC Musée d’art contemporain Bordeaux, and the Musée Picasso in Antibes. The artist’s works can be found in several major collections, including the collections of the Museum of Modern Art New York, the Museum Moderner Kunst Stiftung Ludwig Wien, the Carré d’Art Nîmes, the CAPC Bordeaux, the Stedelijk Museum Amsterdam, the Musée National Monaco and the Centre Pompidou Paris.