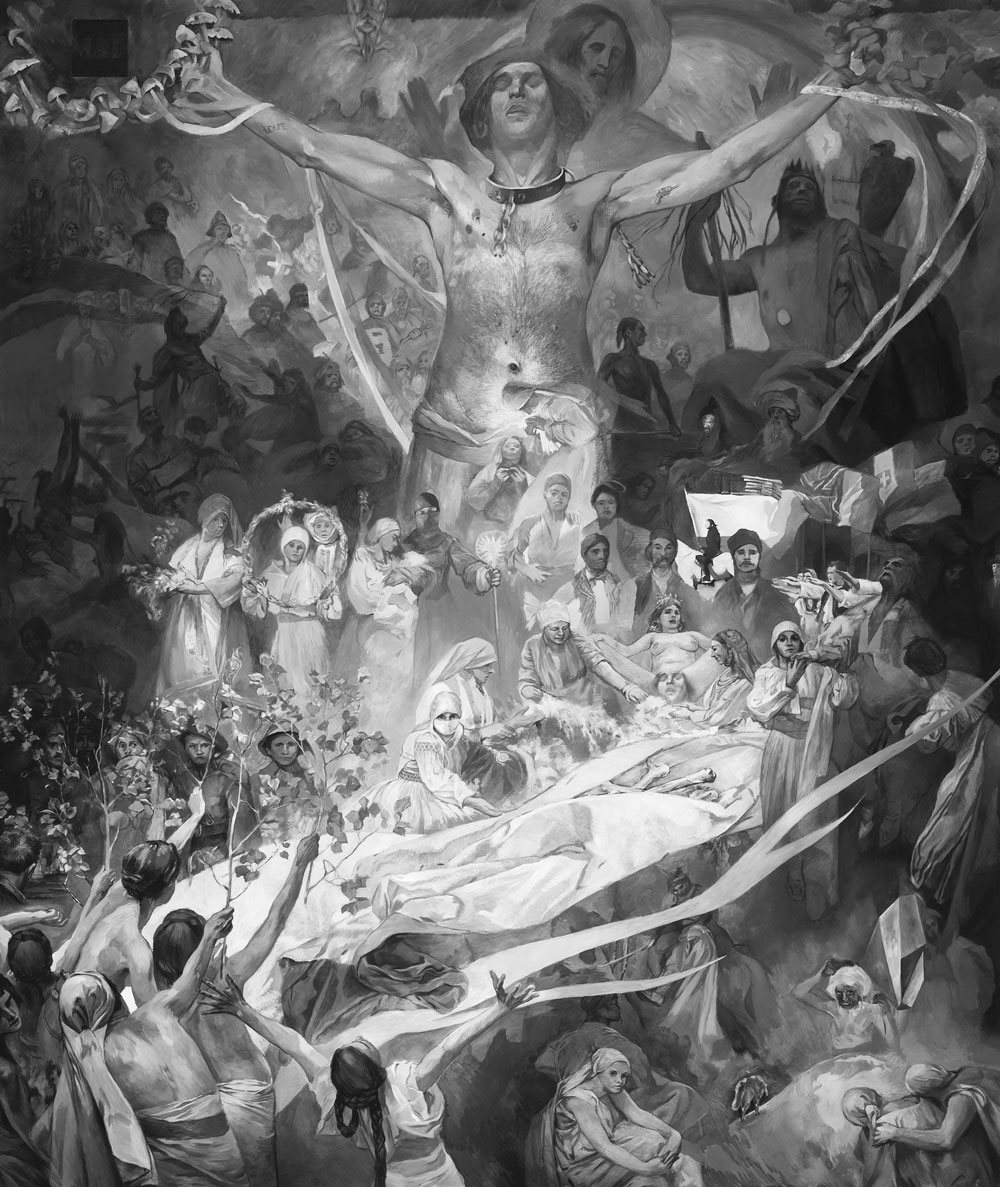 This site-specific work by Jiří David draws inspiration from Apotheosis: “Slavs for Humanity”, a monumental painting from Alfons Mucha’s Slav Epic cycle. The installation was presented in 2015 in the Czech and Slovak Republic Pavilion at the 56th international biennale in Venice.

Jiří David reinterprets Mucha’s heroic saga about the history of the Czechs and Slavs, approaching it from the position of a contemporary artist endowed with a sense for critical analysis. David’s black and white version of Apotheosis is an act of deconstruction, enhanced by his subtle intervention in the individual parts of the composition in the form of apocrypha. The installation is a stimulus to critical thinking about a number of serious political, economic, socio-cultural, philosophical and sociological issues that reference the past and the present of the world in the broader relationships in which local and global issues intersect.

The installation aims to inspire active participation of the spectators, providing them with a whole range of interesting mental, emotional and visual experiences. The focal point of the installation is in a corridor, where the viewers/participants encounter the reinterpreted version of the Apotheosis. The painting is reflected in a mirror wall, making the viewer an ephemeral part of the artwork. The installation makes the viewer think about geopolitical and socio-cultural questions in the period of more than one hundred years. Jiří David’s Apotheosis asks questions linked with the re-assessment of terms such as home, motherland, nation, state, the Slav identity or history of the Czechs.

Jiří David (1956) is one of the most distinctive representatives of contemporary Czech art. The rare diversity and richness of his oeuvre won him a brilliant reputation in his country and abroad. His areas of interest include painting and mixed media art – especially photography, installations and realizations in the public space. David’s approach is characterized by a considerable degree of personal involvement as he seeks to convey a multi-layered message about topical socio-cultural and political problems. He is a type of artist who persistently seeks original and innovative visual conceptions and poses critical questions through his works, helping the viewers find better orientation in the complicated contemporary world. David regularly exhibits in the Czech Republic and abroad and his works are represented in the collections of many prestigious institutions, both local and international (for example the National Gallery in Prague, Prague City Gallery, Moravian Gallery in Brno, Ludwig Museum of Contemporary Art in Budapest, Museum of Moderner Kunst Stiftung Ludwig in Vienna, or Art Institute of Chicago).