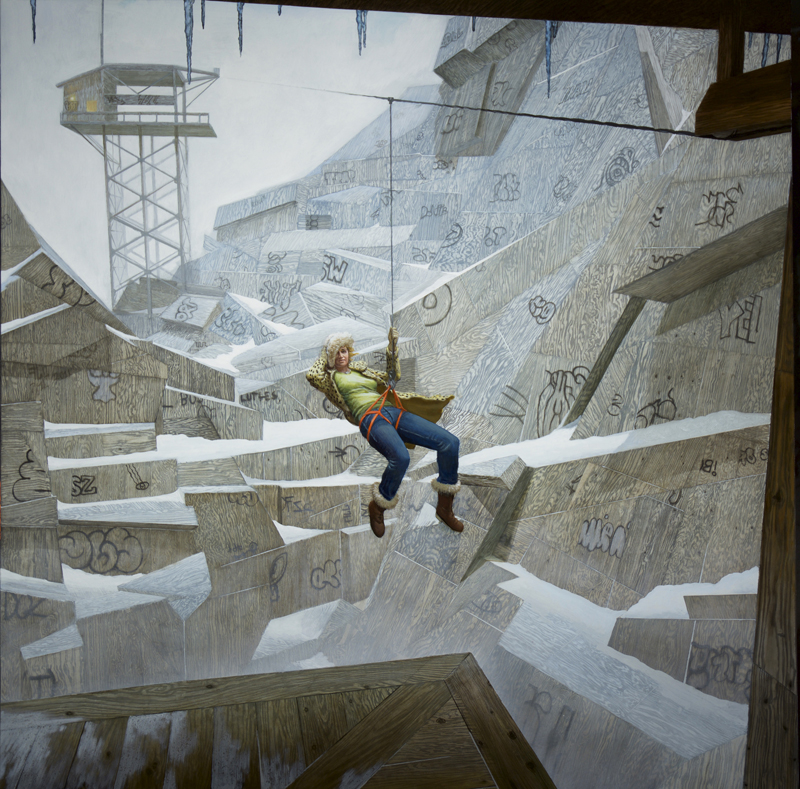 A world of vivid wood and exuberant youth unfolds when John Jacobsmeyer invites us into his solo show “Knotty Children”, which is Jacobsmeyerʼs second solo at Gallery Poulsen. Inspired by The Brothers Grimmʼs fairy tale ”Hansel and Gretel” from 1812 Jacobsmeyer provides us with a totally new and updated image of how naughty and troublesome children spend their time and often end up in tragicomic situations.

The incidents occur exclusively in Jacobsmeyerʼs absolute fiction – complex wooden interiors and computer inspired architecture. We look into intricate environments and scenes, all of which are built of pinewood patterns in various color tones. Itʼs difficult not to be impressed by these worked through surfaces and the woodʼs mesmerizing and enchanting effects.

According to Jacobsmeyerʼs own words in the quote above, the wood has a unique fascinating structure with an internal logic that Jacobsmeyer has been studying since his childhood, where he visited his grandparentsʼ pine cabin during summer vacation. Paradoxically, all oil paintings in “Knotty Children” are created on a base of aluminum. In this manner, Jacobsmeyer has by no means succumbed to the path of least resistance when he paints his wooden motifs to the metallic surface.

The contrast between the cold metal and the final warm and vivid expression is impressively vast. In this way, the challenge in the artistic process is made the biggest and most difficult possible – an assignment that Jacobsmeyer easily solves without the slightest hitch. He transforms the man made materials back to represent the inviting natural world with the human hand.

Despite the somewhat didactic title “Knotty Children” Jacobsmeyerʼs works and reference to “Hansel and Gretel” remind us that youth not only evokes laziness, audacity and gainsaying but an antonym to adult pragmatism. Unlike adultʼs often rational and prudent approach, youngsters act with a liberating ingenuity, spontaneity and immediacy that we all can benefit to be reminded of from time to time. You are invited in to become lost in what resembles a whimsical programming error in a computer game, and find the excitement is the navigation of the adventure over the outcome.

With thirteen square oil paintings Jacobsmeyer underlines his fascination of the virtual world, where he uses this exact format to give us, the viewer, a unique perspective imitating a first-person-shooter (FPS) from video games, or from the scrutinizing gaze of the surveillance camera.

Exclusively from the front row Jacobsmeyer lets us look into his marvelous universe of the exploration of youth, catastrophes, and peering knots!

The show consists of thirteen oil paintings on aluminum in three different sizes.

John Jacobsmeyer will arrive in Copenhagen Tuesday, February 23rd and will be available for interview and present at the opening Friday, February 26th from 5-7 pm. Contact Morten Poulsen at +45 3333 9396 / info@gallerypoulsen.com for further inquiries.