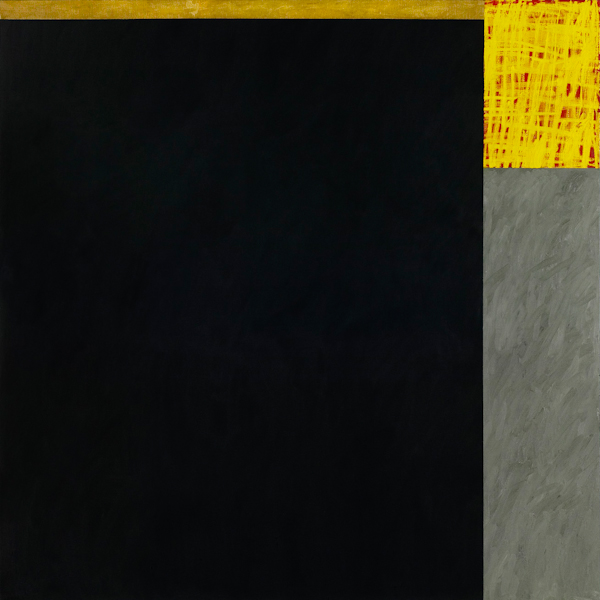 Winner of the 2014 National Prize for Plastic Arts and, since 2002, member of the Royal Academy of Fine Art of San Fernando, Jordi Teixidor is one of the principal artists of his generation. His early collaboration during the sixties with the Cuenca Group (Zobel, Rueda, Torner) in the founding of the Hanging Houses Museum of Abstract Spanish Art in Cuenca lay the seed for a committed art of rigid and austere abstraction that Teixidor was to follow for more than thirty years. In 1979 he received a grant from the Juan March Foundation, enabling him to travel to New York, where he lived for several years. There, he discovered the Abstract Expressionists of the New York School, opening for him the transcendental possibilities inherent in painting.

Characterised by a reductionist aesthetic and a limited chromatic range, the paintings of Teixidor dig deeply into the unconscious, with bands of colour ranging from sombre blacks to expressive gestural marks that underline the complexity of the human spirit. Evoking the devotional paintings of Mark Rothko or the icons of Andrej Rublev, these works let the viewer into a meditative space that broadens the limits of our perception.

Jordi Teixidor has given his upcoming exhibition of paintings on canvas and paper (6-29 August, 2015) the enigmatic title of Open the Night, in clear reference to Matisse's pivotal work from 1914, French Wndow at Collioure, described by Louis Aragon as the most mysterious painting the artist ever painted With their ample use of black, their vertical framing construction along architectural lines and the deep mystery that these works evoke, Teixidor continues his investigation into space and volume, last seen at his 2006 exhibition at the gallery, as a vehicle for meditation upon the human condition.

Jordi Teixidor has exhibited extensively in one-person and group shows across Europe and the United States, including museums such as the IVAM, Valencia, where in 1997 he had an important retrospective, the Centro Santa Mónica de Barcelona and the Solomon Guggenheim Museum of New York. His work can be found in the permanent collections of the most prestigious museums and institutions.