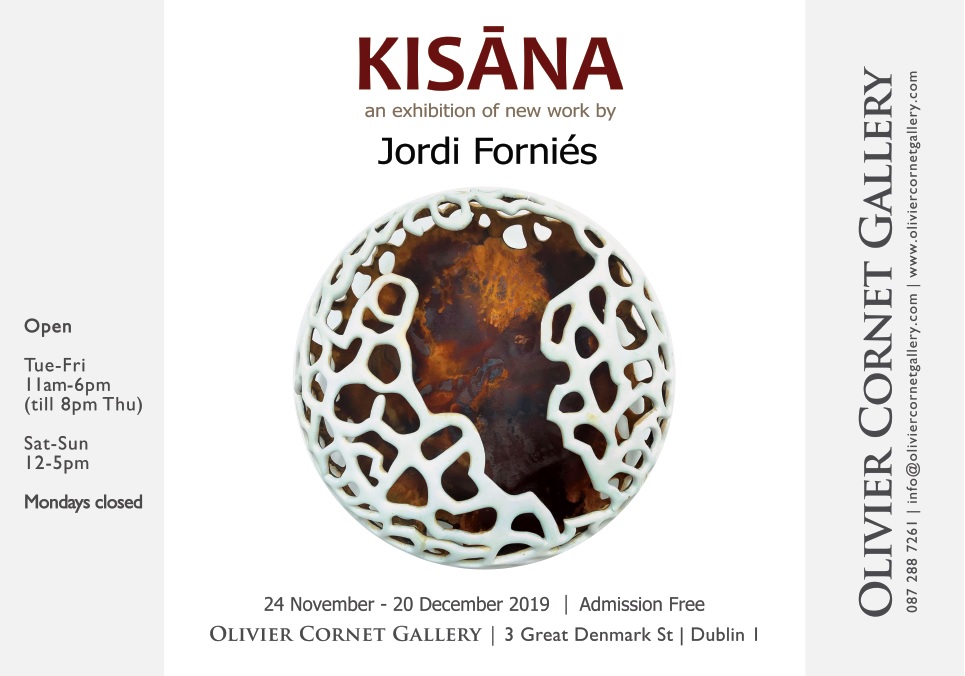 The Olivier Cornet Gallery is delighted to present

a new solo show by

Counsellor for Tourism, Rubén López-Pulido, from the Embassy of Spain in Ireland,

The Non-Matter that Matters

The Core of Matter. Over the course of contemporary art history, artists have contended with the correlation between the flatness of a painting’s surface and the necessity of three-dimensionality in the objects they depict. As a result, artists have developed a variety of mimetic techniques to grapple with the distinction between reality and art, and whether or not this is of any importance. Since the early twentieth century, their focus has been centered on the reality of both what is real within and of the art piece itself. The fusion of three-dimensionality with painting was demonstrated by two widespread strategies in the development of creating volume in two distinct ways: first, by attaching found objects to the support or substrate (canvas, panel or metal), and second, by amplifying the painting material itself.

The first method of attaching objects was intended to establish strong connections with the practice of everyday living, and was particularly widespread during the 1920s-1930s avant-garde and the 1950s-1970s neo-avant-garde (Vladimir Tatlin, Max Ernst, Robert Rauschenberg). Such an approach evolved as a form of protest against conservative methods of traditional painting, blurring the lines between art and non-art. In contrast, while the artists of postmodernism and metamodernism (Anselm Kiefer, Jo Braun, Shane Hope) also attached objects to the surface, they were more interested in defining the aesthetic limits of painting and possibilities by expanding them using unconventional materials and technologies (like 3D printing), or by reinterpreting the usage of traditional mediums (such as mosaics). These painters preferred abstract visual language over narrative strategies, proposing that artwork be seen not as a message but rather as a kind of ‘organism,’ accentuating its texture, structure and interaction with its surroundings.

As a painter, I use materials and textures to translate my artistic language. Materiality and texture encompass real physical bodies with specific objectives and functions. While form often includes a sense of three-dimensional mass or volume, shape refers more specifically to the essential aspect of form that governs its appearance and configuration. The integration of these concepts in my artwork is not random or unsystematic; it is fully functional.

I prefer to avoid the ‘spectacle’ of popular or easily recognizable codes, along with any form of representational narrative, in favor of the language of abstraction. However, in some of its variations, abstract art can be overly detached and opaque, building a wall between the work and the audience. Instead, I am fascinated by the inner controversy of art objects that precariously balance self-sufficiency with the possibility of asking deep questions. If the former suggests a contemplative position of a bystander merely “enjoying” art, the latter requires active participation in the production of meaning by reading into the artist’s intent.

For the last two years I have been observing art in many non-artistic created objects, wondering what characteristics and elements, both matter and non-matter, add precious artistry to an object – or even in a broader manner, what adds meaning itself to an object. I quickly discovered that meaning is a complex concept linked to many aspects that define objects, but that definition is also highly fragile as well as changeable. Meaning can and does depend largely on sociocultural context.

Everything started with real ‘bullshit’; literarily, a word used to define something stupid or nonsensical, but for farmers in Punjab in India, something physically collected, dried, and used daily as organic fuel with which to heat water and cook. Both interpretations are ‘correct’, but don’t coexist in the same space and moment.

I began searching for art in objects that were not created to be related to artistry in any way. While I found this in many places, I was especially fascinated by farming tools both ancient and new that are used in many cultures still dependent on farming. These tools are truly stunning pieces made of metal or wood, and with incredible shapes, forms and imperfections that naturally occur with use and the passage of time. All non-matter elements intrinsically linked to the objects themselves give them a real meaning of existence. This is the origin of the work that I named Kisān (Kisāna) – a term usually written in Punjabi to name farmers.

In the past, I presented several artworks created with the intention of using 3D forms as part of the painting material. The forms are part of the paintings and the paintings are part of the forms. These forms, and ultimately the artworks themselves, are created to include parameters that define meaning and time. Function and time are an indivisible aspect of these forms and are the primary ‘non-matter’ that defines them. In its formalistic sense, method fills the objects with communicative energy, helping the recipient to decode it and the artist to highlight their intent. In other words, a piece infers its context with the help of its own structure – its form.

Shapes become a defining link between body and function. This is intrinsic to all the farming tools I studied and is a powerful additional painting material. Hinting at the purpose of an object immediately enhances the presence of non-matter in the work, establishing communication with the core principles that unify multiple realms within my practice. I define non-matter as the inherent meaning of materials that cannot be clearly defined by a specific narrative, but rather are perceptions.

Form has an inherent link to the function of objects, and this is particularly clear when we refer to tools, particularly farming tools. Form becomes function, and so shape and texture immediately link to its reason for existence. Can the same be applied to an artwork? This question started to resonate with me, eventually becoming the source of inspiration for my current work.

I found that non-matter linked to these tools in the essence of form, function and time. I wanted to create a series of works that incorporated sculptural elements, and that embraced and shared common links, both in their making – techniques and materials – and in their meaning, particularly the subject of non-matter as defined by the aforementioned form, function and time.

The non-matter that matters most is the kind that influences everything, and which breaks the limits of the canvas in search of further meaning.