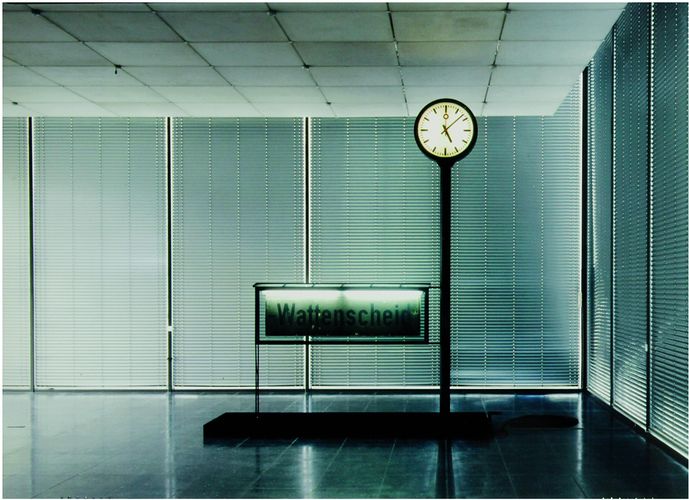 Klaus Rinke is one of the pioneers of process art which enables the observer to experience time and space as a ‘primary demonstration’.

The primeval forces of nature, especially time, play a central role in his work. In his exhibition DERZEIT at the Skulpturenpark it is the big railway station clocks which examine the theme of time or lack of it.

Since his childhood, in which he spent a lot of time around a station, clocks have become a symbol of the brevity of human life.  In other works, the element of water in continuous motion becomes a metaphor for the passing of time.

It was thanks to the private initiative of Tony Cragg, the british sculptor living in Wuppertal, that the Sculpture Park was founded and established. Thirty years after Cragg took up his exhibition activity, he began looking for a permanent site for presenting sculpture outdoors and discovered the abandoned Waldfrieden property, which he bought in 2006. That very same year he began redesigning the park grounds and the buildings that, after long years of vacancy, needed to be thoroughly renovated and modernized. In appreciation of the historical estate, its former structures and material substance were preserved to the greatest extent possible, thus keeping its historical dimension intact despite the conversion of the park and buildings to accommodate their new use. In 2008, the Sculpture Park was opened under the auspices of the Cragg family’s nonprofit foundation. It houses a steadily growing collection of sculpture, including examples from Tony Cragg’s own large oeuvre. All is accompanied by changing exhibitions of internationally known artists, lectures on culture and the humanities, as well as concerts. Beyond this, the Cragg Foundation is also dedicated to research on, and the publication of, the subject of the fine arts.