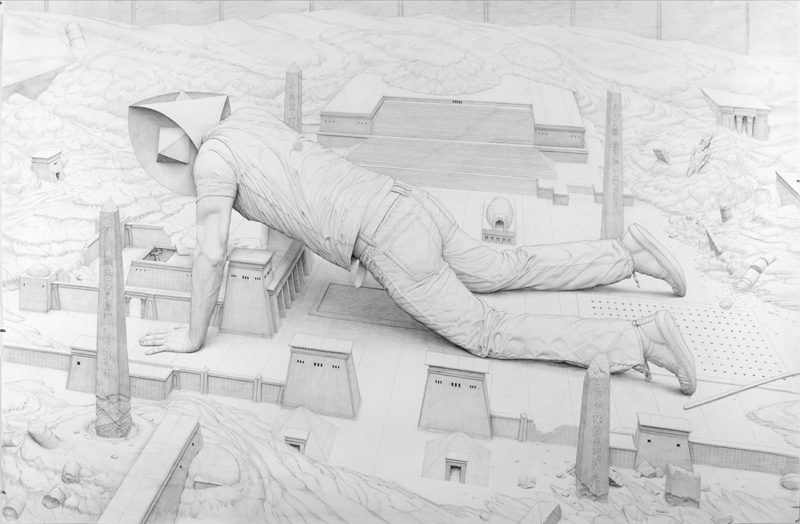 Everyone knows the feeling of getting the wind knocked out of them. Your legs disappear underneath you, and the world suddenly feels completely different for a while. It can happen when you get a heavy blow in the stomach from the toughest boy in your class, and it can happen when you take up a full-page article in The International New York Times, as Jean-Pierre Roy did with his work “Nachlass” last week. But memories, good as well as bad, particularly good ones, do it the best. It is through this mnemonic lens that Monica Cook and Jean-Pierre Roy invite us in to their double show “Knock the Wind”.

A concoction of the two artists’ memories of everything from mystical fantasy creatures to cinematic and apocalyptic scenes, the show borrows its title from a quote by Jim Henson, the creator of The Muppet Show, Sesame Street and The Dark Crystal among others. His use of the phrase suggests the physical power of the immaterial rush of the remembrance of the past. The show “Knock the Wind” is a gesture to memory as a construct – a phenomenon that we all carry with us through life.

Monica Cook, on display for the first time in Gallery Poulsen, presents eight works with graphite, gouache and watercolor on paper. Here we see everything from imaginative animals to autobiographical scenarios with naked women interacting in peculiar ways. There is an elegant undertone of naivety and playfulness in the works – all in radiant, delicate and feminine pastel shades.

While two potatoes’ sprouts meet in a rainbow in “Potato Connection”, we see a naked woman sitting on the bedroom floor drying her hair with a remarkable hair dryer powered by corn in the piece “Lit”. Cook inaugurates us into intimate everyday spaces that are enchanting surreal and filled with references to how children meet and perceive the world with innocence and immediacy. It is curious, fascinating and extremely liberating!

We leave the colorful close-ups of Monica Cook and turn towards the monochrome panoramas of Jean-Pierre Roy where simple graphite dominates the large paper surfaces. With motifs characteristically built up by giant human figures, magnificent landscapes, architectural elements, industry and geometry, we do not doubt that we look at works made by the talented hand of Jean-Pierre Roy.

With titles drawn from half remembered lines from film of his childhood, Roy presents a series of images that reconstruct the narrative space he returned to over and over as a source of visual and emotional memory. In doing so, Roy does not send the viewer back in time, but brings these spaces up, out of the haze of past remembrance, and revivifies them for the here and now. Questioning the nature of perception, and the construction and recall of memory itself, Roy withholds an easy read of narrative space, forcing the viewer to compile the pieces into a personal whole.

In a world where an extremely large amount of information has been mapped, studied and proven scientifically, the memory is an oasis based on feelings, sensations and atmospheres. Memories are not reproductions of hardcore facts. Rather, they are reconstructions, changeable and often materialized as lofty thoughts.

Fortunately, in “Knock the Wind” we get to see the memories concretely visualized on paper. Without any kind of suffocating nostalgia Cook and Roy open up the chamber of the memories and welcome us into their visual memory. In a very simple and humble manner, merely on paper, we get to see strong subjective memories. Memories that easily can knock the wind out of even the most stubborn rationalist!

The show consists of twelve works – eight with graphite, gouache and watercolor on paper and four works with graphite on paper. In addition, we present three brand new and exclusive photogravure prints of Jean-Pierre Roy’s drawings in a limited edition.