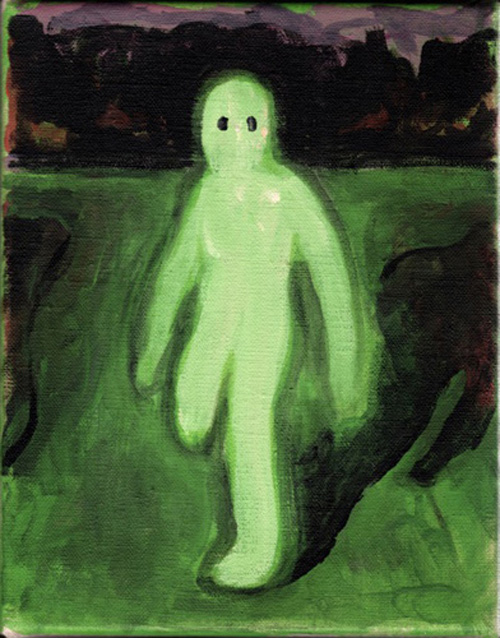 “Guillaume Pinard is back”.

The phrase is a little exaggerated, definitely hackneyed, but at least, it means what it says. It suggests an epic dimension, gives the man the bearing of a romantic hero, supposes a role to be acted possibly with style.
The last time Guillaume Pinard occupied Gallery Anne Barrault, he was sounding his legitimacy as a painter, beyond his interdisciplinary profile. The painter in itself, the painters within him: the amateur, or the most learned one, the one who knows as well as the coarsest. That was the call, at the time. Humble, conscientious, he faced his practice, as if taking up a challenge, getting his hands dirty. Capable of this, smart for that, incapable of drawing this line, awkward with that color…
An exhilarating experience which today makes him put aside the question of being legitimate or not, for some time only. Freed from this burden, Guillaume Pinard can readily pace the multiple, wild and steep countries of his personal painting, in order to draw a map of it very meticulously. There is the aim. By playing the discreet conquistadors or the careless adventurers, as you like, he sheds, as usual, his images he combines or links. He arranges them, like markers on a background to be filled, an area, a map to be soiled, drawing relations he assumes obvious. From one point to the other, from one line to a subject, he draws. He hurries, as much as possible, and avoids stopping too brutally. Matters are bound, one color brings a tint, a frame leads to a format.
The painter and the cartographer are the one and same face that Guillaume Pinard tries to show, diligently, efficiently. He has a role to play.
“La Diligence”, the title of his new exhibition, calls to mind, of course, this promptness to carry out the work, to do a nice quick job, at least as best as possible. A feverish unrestrained hurry. The title evokes too the stagecoach in westerns, which allows its passenger to travel across bare, hostile, unique lands. To achieve this aim, Guillaume holds the reins of his introspections. To estimate his painting, he knows he must go by such or such place. And never mind the way or the direction, since only the movement matters.