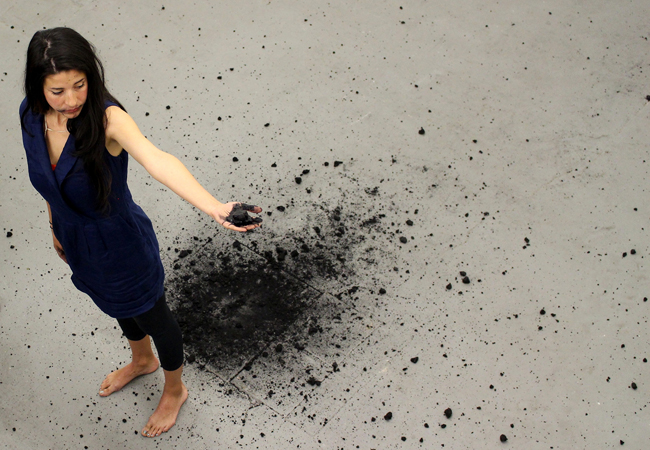 In her exhibition Diluidos at the galerie michaela stock, Lala Nomada thematizes experiences of the human body and recollects memories of its former presence as a proof of life. For some time now, the Mexican performance artist has been working on the concept and realization of a concrete serial art in which a large number of performances, video-installations, and photographs have been created utilising a few and select group group of components – coal, coal dust and her body.

Diluidos can directly translated as “diluted” in German, “verdünnt” and for the artist its has another colloquial layer as “dissolve”. Such a “dissolution” is exactly what happens when the artist’s body comes into contact with the coal. Both elements (body/coal) in contact influence each other. The coal is being researched and processed. The priority for Nomada is to absorb the qualities of the material and to locate its potentiality for amorality in certain industrial, historical, and sociological contexts as a materialization of physicality and emotions. Coal has been taken as an archetype for paradoxical metaphors: energy and life- but also for transience and pain.

The exhibition proposes photographs, a video installation and performance which inaugurates the opening on 21.6. Lala Nomada combines the transient with the permanent: a fingerprint, the collection of footprints, the performative action. The artist body is covered with coal, or lies on it as if laid out, or even disappears into it’s materiality. This action draws attention to the countless unsolved cases of disappeared persons in Mexico and worldwide. Notwithstanding, not only has something ceased to be alive, but it has become invisible- visual representation is particularly important. Thus, an image of disappearance confirms the concident principle of disappearance.

Lala Nomada tells us in Diluidos parables of transformation, opposites and symbiosis, full of global references and local sensitivities consisting of erased signs of recognition, life, and perception such that it moves through certain depths and poetics.

No future. I cannot imagine it.I constructed in my thoughts the memory few hours ago: My eyes were opened in the darkness, I couldn’t see any difference between having my eyes opened or closed…It was simply dark, entirely dark; no depth, no pattern. It must be like that.And still, I can sense myself. I know I’m there… somewhere, even if it’s a placeless place.I’m there, inside my body that is the only place in that endless darkness. I feel so disturb when I think about the darkness without the only place I know: the inside of my body.When I die, when we all die, we won’t have a body anymore… Would we disappear with it too? Or are we going to dissolve with it and exist like the air, without a form and without a place? (Statement Lala Nomada)