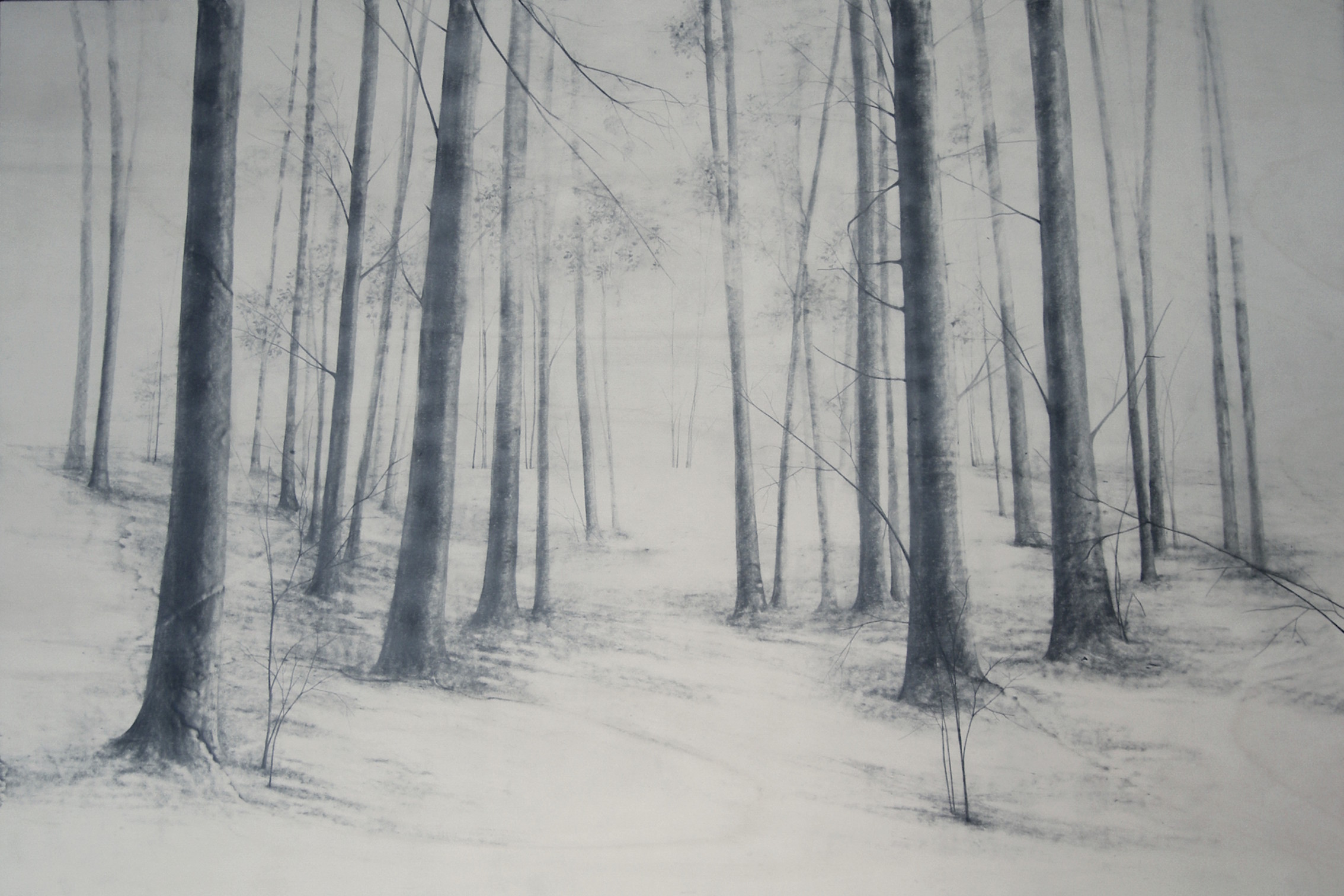 While the world is facing a turning point and the main question addresses – in extremis ¬¬– the protection of the environment, while scientists describe apocalyptic scenarios of what could happen if the thermal state increased of two degrees, two artists describe their idea of landscape.
Signed by JERNEJ FORBICI and MARIKA VICARI, LANDSKIP – opening on Saturday 16th January from 6 to 9 pm | PUNTO SULL’ARTE Gallery in Varese (Casbeno) – is more than a double solo exhibition by two artists who devoted their art to Nature, above all it is a setup project to be explored and crossed. An enchanted wood which, through the rustle of its branches and the creaking of the leaves, tells us about ancient stories. Not a denounce, but a whispered memento.
Since when he started to paint, Jerney Forbici has engaged the audience – through his powerful and doughy painting, soaked within ancient echoes – into the devastations caused by aluminium factories in Slovenia. However what still rules upon those huge, hypnotic canvases is a sense of grace and peace which materializes within the Renaissance backgrounds. The dialogue turns into a mournful chant through the delicate graphite works by Marika Vicari: multitudes of spare trees endlessly stretching, quiet fields covered by snow, vibrant branches plunged into moss scented breeze.

“It will be like entering a different Nature, a landscape made of huge forms: a thin skin made of red soil, tangles and twines of plants and grass, leaves covering the ground, a powerful source of air and energy, maintaining freshness and softness, and one of light animating the two installations. The exhibition starts like a dialogue and a debate upon landscape, a land built, crossed and organized by mankind; then it freely develops, to discuss about environment and denounce, but mostly to focus the audience’s attention upon normal – or alienating – situations, placing its bodies into an unknown relationship with Nature. Landscapes recalling the earth, cracks, forests, breaches…. Metamorphosis of space and time, of languages and of the realities defining them.
LANDSKIP is an exhibition which considers landscape both as the evolution of modern life (already humanised, according to Jernej Forbici) and as pure Nature (the woods and trees by Marika Vicari), a fundamental resource for biodiversity and beauty.
Land development, manipulation, destruction, mankind, landscape, biodiversity and climate, identity and the role of the forest: these are some of the primary topics of the exhibition.
We want to investigate both the ecological issue, the protagonist of the artistic research, and the changes occurred within the environment-earth, caused by our culture, civilization and history. Through our works, we seek our own identity within landscape, meant as LANDSKIP, in its most ancient sense.
Thus, beyond manipulation, deforestation and barbarity or the willingness of mankind itself…. Nature is the only resource able to regenerate and create life.”
Jernej Forbici e Marika Vicari

JERNEJ FORBICI (Maribor, Slovenia, 1980) He studied at the College for Visual Arts of Ljubljana. He graduated with honours in Painting (chair Prof. Carlo Di Raco) at the Academy of Fine Arts of Venice, then specialising in Visual and Performing Arts. Since 1999 his works were chosen for many solo and group exhibitions in Europe, USA, Canada, Argentina and China. His works also belong to various public and private collections. He was invited to Biennials: Hicetnunc, Pordenone (2003), IBCA International Art Biennial in Prague, German Pavilion (2005), Accade, 51° Biennial of Venice (2007), 53° Biennial of Venice, Italy Pavilion – Academies (2011). In 2009 the Academy of Fine Arts of Venice organized a retrospective of his works at the Magazzini del Sale, curated by Carlo Di Raco. In 2011, after having published his first monography and presented five retrospectives in Italy and Slovenia, he was invited to take part to the exhibition Il fuoco della natura in Trieste. In 2012 he won a scholarship from the Slovenian Ministry of Culture and was invited in London, where he studied the English masters. He lives and works among Kidričevo, Ptuj (Slo) e Vicenza (I).

MARIKA VICARI (Vicenza, 1979) She graduated with honours in Painting (chair Prof. Carlo Di Raco) at the Academy of Fine Arts of Venice in 2003, then graduated in 2005 in Visual Arts at the Design and Arts Faculty of Venice. She studied and worked upon site specific projects with artists, curators and international photographers, among which: Hans Ulrich Obrist, Lewis Baltz, Guido Guidi, Mona Hatoum, Antoni Muntadas, Armin Linke and Angela Vettese. Since 2000 she has been chosen for many solo and group exhibitions in Europe, USA, Mexico, Brazil, Canada and China. Her works belong to public and private collections in Europe, Canada, USA and the United Arab Emirates. In 2008 she knew Ermanno Olmi for whom she has realised an intaglio folder. One of her works has been chosen and given to him by the city of Asiago as an award for the Golden Lion he received for his career. She constantly takes part in Art Fairs in Europe and Canada.