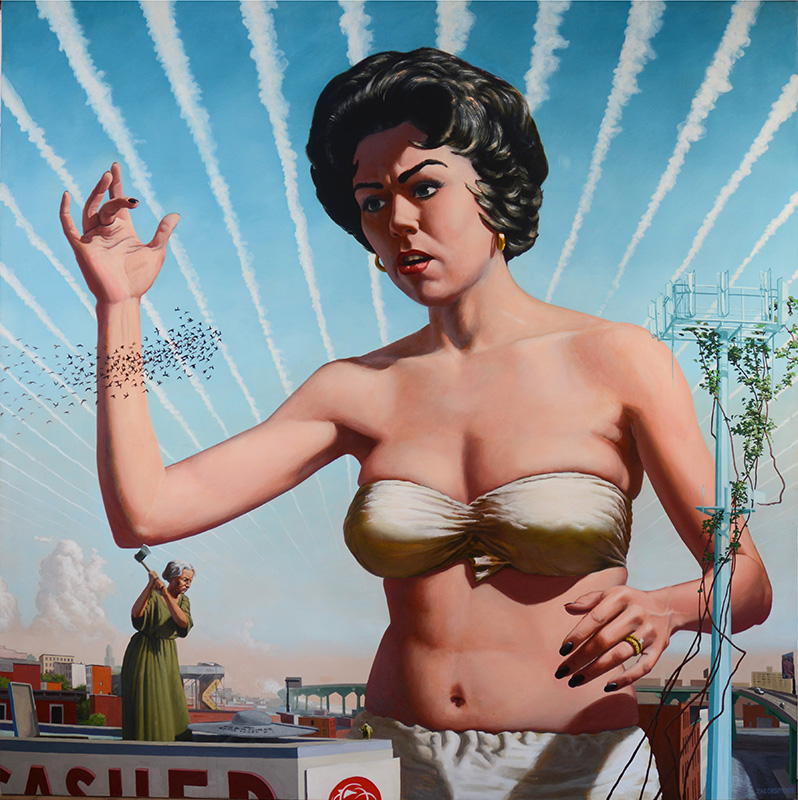 Locus Colossus”She’s like Nancy Archer from ”Attack of the Fifty Foot Woman”, a 30 something giant half naked woman with an Elizabeth Taylor haircut from the film, ”Cat on a Hot Tin Roof” looming several stories above Red Hook Brooklyn on a sunny day with an armada of jet vapor trails receding into the distance while in the foreground another giantess narrative from the Twilight Zone series plays out on the roof of a check cashing establishment.” – John Jacobsmeyer

In a dreaming and cinematic way John Jacobsmeyer here describes the biggest painting in the exhibition called ”Invasion”. It references only a fraction of the cultural material organized to make a painting about how our media magnified female emotion into a sublime force of nature. It is an example of how Jacobsmeyer develop allegorical structures for each work and shows how many layers there is in his art.

Locus Colossus is John Jacobsmeyer’s third solo in Gallery Poulsen and once again he proves not just his magnificent technical skills, but also his understanding of incorporating countless layers from art history, literature, film and comics into his work and thereby setting our present time and perception into perspective. The exhibition shows a number of masterpieces produced in 2019 and 2020 and one, the giantess, described on the top, that has been ongoing for several years.

Each is a meditation on notions of the sublime processed through a host of influences from romantic painting, gothic fiction, and horror comics. Like a romantic painter, Jacobsmeyer is drawn to awesome beauty, but unlike them he can’t believe in it. He disrupts the narrative and render it’s materials to excess, the effect may be better described as anti-sublime.John Jacobsmeyer grew up in suburban communities where construction of the local highways and subdivisions left only oases of wood lot where he and other kids would build clubhouses out of scrap plywood and invent dangerous games involving tree climbing and firecrackers. The wood lot seemed to offer none of the transcendental inspiration that you’d find in Friedrich’s paintings or the metaphysical terror of Poe. But he slowly grew to see something powerful there in the banality of neglected nature, in a clearing among the trees or a rock outcropping that had a certain devious geometry. The creepy fiction of H.P. Lovecraft inspired him to see this. And it’s in the works of Max Klinger where such everyday absurdities become allegories.

It follows that our notion of nature is culturally constructed which holds especially true for my current environs. Having moved to the Hudson River Valley from Brooklyn several years ago, Jacobsmeyer is again surrounded by embattled woodland. Here, between the Sawmill River Parkway and the New York Thruway among the giant trees shrouded in vines he can recognize the landscape he came from. There’s a grandeur here, a power that people don’t seem to notice. John Jacobsmeyer’s paintings show very clearly what a great landscape painter he is, but it is in the often twisted elements that he positions in the unanticipated surroundings that you find his characteristics and depth. The painting Colossus is a great example of how he has positioned the giantess as a metaphor in this place and shows how he reinterprets the art history as well as experiences from his own past and thereby creates a parallel reality.