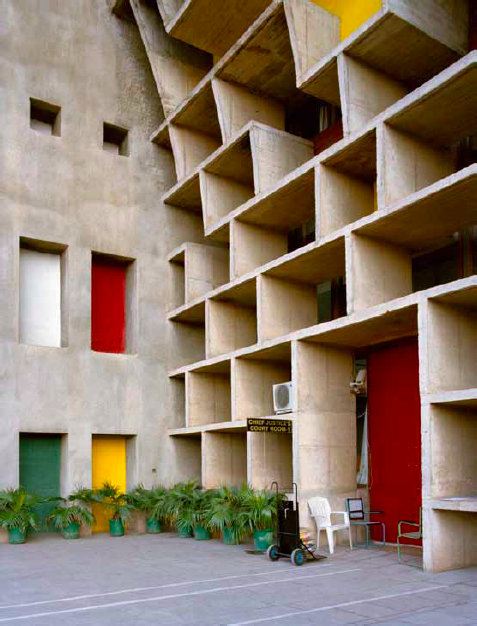 The Leipzig photographer Margret Hoppe visited Le Corbusier’s monuments of modernity in Germany, France and India. Her works capture the often socially encumbered architectural imperative of the great master in striking, almost abstract painterly images. In her latest series entitled “Cotton and Capital – Le Corbusier in India”, Margret Hoppe focuses on Chandigarh, Le Corbusier’s planned city in northern India which was developed as of 1951 and represented an architectural milestone in the early days of India’s independence.

Photographed in sections and fragments, the architecture can still be recognised as “Le Corbusier”, yet it is different to how we usually see it – its colours, the cantilever roofs as protection against the sun, the grid structures, the evident traces of wear and tear. Le Corbusier picked up on Indian elements, although he was criticised for ignoring the reality of India. Yet what is reality? In Margret Hoppe’s works, everything becomes unreal. How close to or far from the modernity of our present times are we? Margret Hoppe already showed a sense of alienation vis-à-vis history in earlier series on neglected and demolished socialist monuments.

Margret Hoppe (born in 1981) lives and works in Leipzig; she spent January and February 2015 in India on a DAAD scholarship. She already received several awards and grants over the past years, including the Wüstenrotstiftung promotional award and the Sachsen Bank Art Prize 2014. Margret Hoppe completed her studies in photography, amongst others, with Christian Boltanski at the École Nationale Supérieure des Beaux Arts in Paris and at the Academy of Visual Arts Leipzig as a master’s student of Timm Rautert and Christopher Muller. The Museum of Fine Arts in Leipzig most recently exhibited her works in a comprehensive solo show in 2014, and works of hers will be shown at the Pinakothek der Moderne in Munich in July 2015.