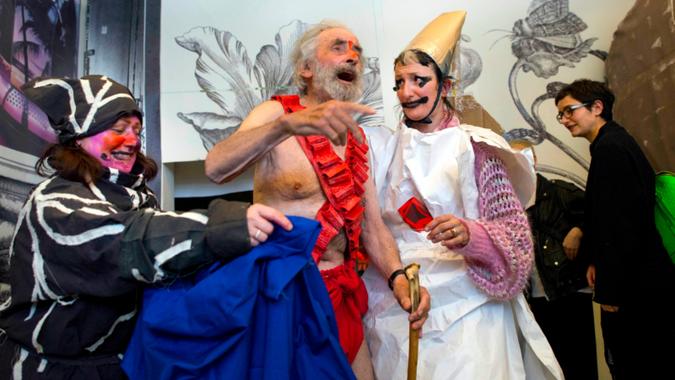 For her first full solo show in Scotland, Marvin Gaye Chetwynd revisits and extends some of her earlier works transforming the exhibition spaces in CCA into a set. Proposing ideas and sharing information on what might liberate people, in an interactive live cinematic proposal, Uptight upright upside down attempts not to shape the world, but rather to visually offer an extension to it.

One of the works being developed for the show is Hermitos Children, an ongoing project of which the third chapter will be presented. It takes the form of an experimental television crime drama. Each episode follows female detective Joan Shipman as she uncovers and solves sex-crimes. The film combines staged cinematic sequences with footage of live performances. Rather than documenting events chronologically, Chetwynd combines both scripted and live elements into a single overarching narrative.

The artist describes her work as ‘impatiently made’, often re-using cheap materials that are easy to process and to use by the many performers she invites to play a role. The collective invitation to develop and make the work are at the core of Chetwynd’s practice, drawing on models of family organisation and models of mixed economies, while demonstrating a willingness to abandon the idea of autonomy as an artist. The notion of play and the importance of playful imagination are given serious consideration.

Beyond the idea of absurdism or illustrations, Chetwynd’s characters, sets, props and costumes embody an ever-changing image of our futures. Quick snippets might become permanent states and loose views can be fixed viewpoints. In this imagination that is constantly shaken and flipped, ‘out of this world’ becomes ‘into this world’ and imagination might be closer to reality than it appears.