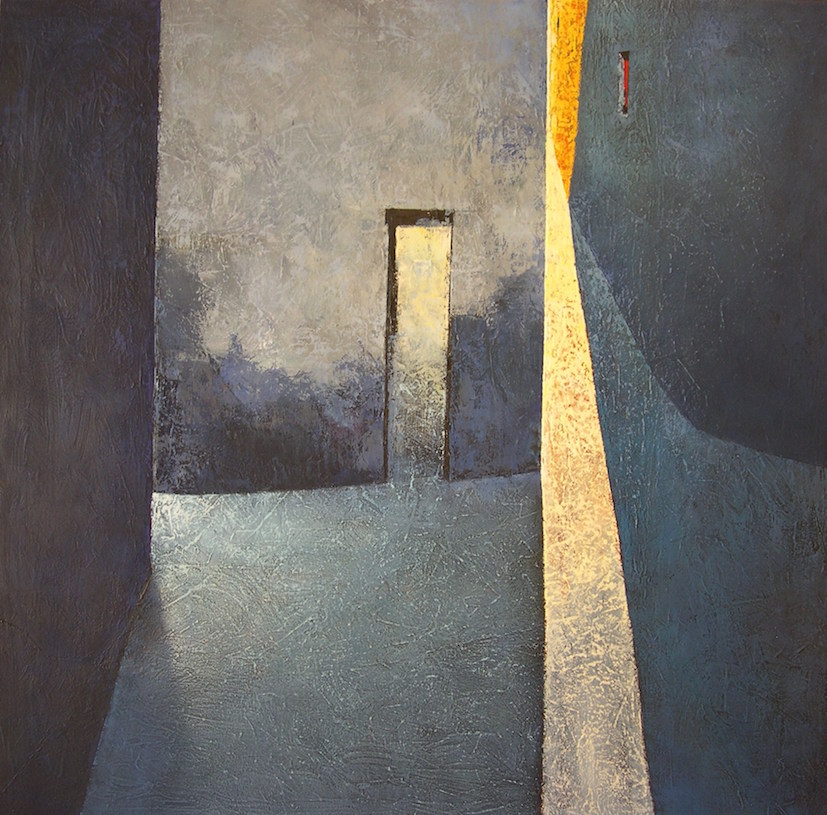 Material is the focus of the triple solo show which, on Saturday 3 October, is going to open the new season of the Punto sull’Arte Gallery. The dense, scratched and dripping painting substance of the urban views by DANIELE CESTARI, the thick colour used by TOMÀS MARTÍNEZ SUÑOL to recall his own roots, and the rough and spare terracotta which actualizes the painful humanity by DOLORES PREVITALI.

DANIELE CESTARI’s urban glimpses are like travel memories; notes of an inner path wherein the metropolis – from New York to Milan and Barcelona – is the chance to create elegant and refined perspectives games, characterized by essential palettes and polished chiaroscuro effects. Being an architect for education and a painter for passion, the artist seizes the city within hazardous frames, through a lowered point of view, where the close-up upon the tarmac is enriched by tactile marks, graphic insertions and emotional drippings. Emotion plays a key role also within TOMÀS MARTÍNEZ SUÑOL’s landscapes. The colour paste becomes the protagonist of his muggy alleys, through which Spanish essence is perceived like a remembrance or a nostalgia. Wide sunlit yellow, fiery red or dusty blue colour fields, define the spaces, thus creating a unique painting, constantly balancing between abstraction and depiction. DOLORES PREVITALI chooses the rough, coarse and primordial terracotta. Her painful figures holding on to each other through a strenuous path, whose faces are pointed towards the sky within a silent plea, crack into sudden splits, unveiling an irregular, untameable and hurt material, just like humanity who even being wounded is still filled with hope.

DANIELE CESTARI: He narrates the metropolis like an emotion reporter. His canvas are urban views based upon evocative photographic angles, whose lowered point of view creates perspectives where the road is the main subject, turning it into a thick close-up, then enriched with material pouring, unexpected colour jolts, marks, graphic signs, alphabet letters. – He was born in 1983 in Ferrara. In 2009 he graduated in Architecture and then he devoted to painting. His artistic path is deeply tied to his university studies, which he fulfilled with a thesis upon urban planning. Within this context he developed his inclination towards the physical aspect of metropolis and urban landscapes by studying painting and photography. He realized solo shows in Italy and abroad (Boston, London, Amsterdam, Mykonos, Sophia). In 2011 he was invited to the Emilia Romagna Pavilion at the 54th Venice Biennial, and in 2014 he was asked to take part into the exhibition “Ritratti di Città – Urban Sceneries”curated by Flaminio Gualdoni at Villa Olmo in Como. He lives and works in Ferrara.

DOLORES PREVITALI: Self-educated artist, she started to mould clay in order to sublimate her pain, turning it into her own silent plea. She then started to shape terracotta and realized the torsos series, abstract sculptures gifted with an uncontrollable drama. Through her recent works, the artist has found the perfect balance between the initial painful characters and the headless torsos torn by sorrow. Little or huge, gathered in masses or scant groups, they narrate they walk of humanity through stacks of roaming figures. Meanwhile, during the years, the artist strongly reduced their concreteness in favour of an extreme stylization. At first, the material was polished, tamed, moulded to be more agreeable, then Dolores discovered the roughness within the terracotta, its innate coarseness, its genuine voice. – She was born in Bergamo in 1949. She started exposing her woks in 1993. Since then she realized various solo and group exhibitions in Italy and abroad (France, Switzerland and Belgium) and she took part in many Art Fairs in Italy. She lives and works in Robbiate, near Lecco.

TOMAS SUNOL: The ones portrayed by the artist are his root landscapes. Deserted and bare views, plunged within a dusty silence; corners wedged among alleys where the sun after leaving some traces, disappears and is then recalled by a suffocating mugginess. The silence, smells and mugginess are actualized through the thick and tactile colour lines which scan the canvas into coloured fields. The colours by Suñol are the free jolt of abstraction within a bare and sober representation which directly reaches one’s soul. – Born in Dieulefit (France) in 1964, the town where his family moved from Catalonia due to the political situation of the time. After having spent most of his childhood in Provence, together with his family he went back to Badalona, his native city, where he attended the Graphic Arts School Pau Gargallo. Being son and nephew of painters, he soon developed an interest towards plastic art. Landscape is the main subject of his works. A landscape which reveals a new and unique soul at any glimpse, thanks to the various tactile implementations of colour used by the artist. He realizes various exhibitions and takes part into Art Fairs throughout the world. He lives and works in Badalona (Spain).