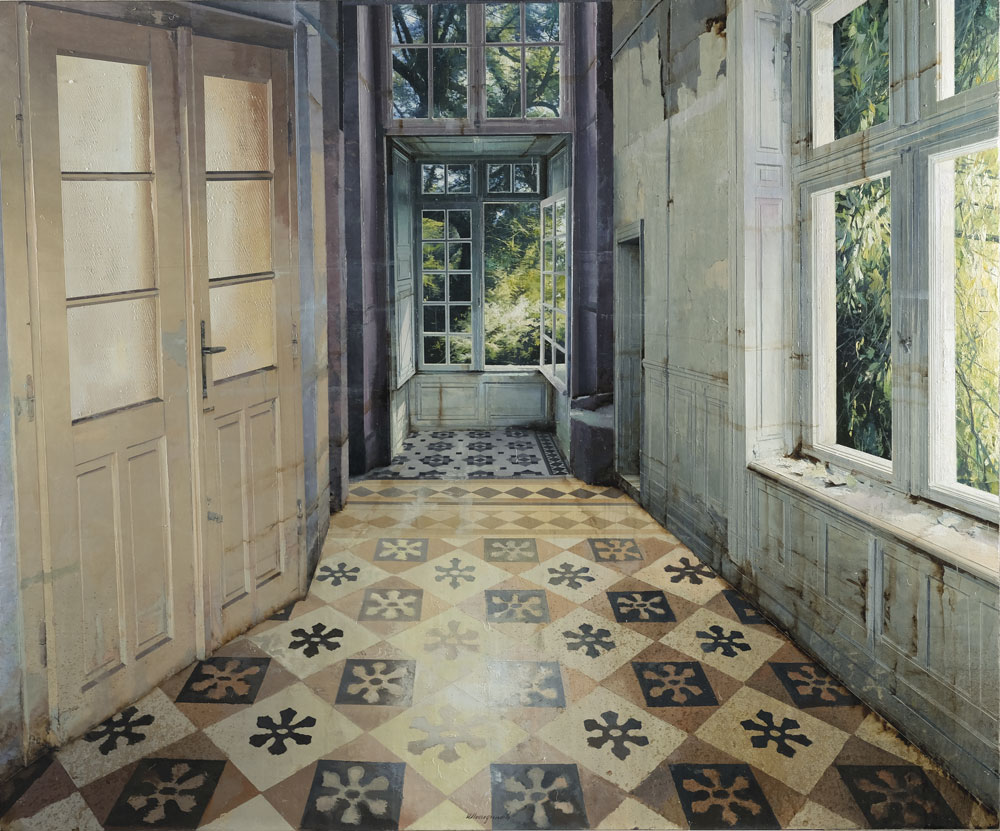 Three years after his first exhibition in Varese and in conjunction with the show Canto dolente d’amore (l’ultimo giorno di Van Gogh) at Basilica Palladiana in Vicenza for the big exposition Van Gogh. Tra il grano e il cielo, MATTEO MASSAGRANDE returns to the PUNTO SULL’ARTE Gallery in Varese-Casbeno with a great solo show, the only one to be held in Italy in 2017. (VERNISSAGE TAKING PLACE ON SATURDAY OCTOBER 7 h 18-21).

Fifteen new artworks, created specifically by the Paduan Master during last year, will be on show in Varese until 18th November.

Being an upholder of a contemporary painting which treasures within itself the precious lesson from the past, the Paduan artist leads us, canvas after canvas, through a path made of silence and suggestions. From Simone Martini to the great Flemish school, up to Jackson Pollock, the whole painting history can be glimpsed within his works, through almost unreadable yet alienating allusions, created by foreshortenings and consonances, balances and chromatic harmonies. Being a modern representative of the great Venetian tradition, Massagrande builds his own spaces through colour and light, which turn into objects, rooms, perspectives. Thus creating such an unreal, uncommon, multiple, seductive and mesmerizing perspective, we feel like being placed within those empty, ancient and abandoned rooms; as if our steps were echoing through the dimness and our gesture vibrating in the air.

MATTEO MASSAGRANDE: He is one of the major exponents of the new Italian figuration art. He is both painter and engraver, as well being an expert of ancient and contemporary art. He is very interested in studying ancient painting, engraving and restoration techniques. His painting is defined as philosophical realism. He started exhibiting in 1973. Since 1985, he has been selected for several solo exhibitions in Italy and abroad, among the most recent we can recall: the important exhibition Massagrande, dalle voci di una conchiglia at Museo al Santo in Padua and Museo Le Carceri in Asiago curated by Alberto Buffetto Arte (2006); the big solo show Massagrande. Scene d’Ungheria, on the occasion of the European Impressionists exposition L’età di Courbet e Monet (2009-2010); Attorno a Vermeer at Palazzo Fava in Bologna, on the occasion of the wonderful European exposition Da Vermeer a Rembrandt (2014); the solo exhibition at the Museo Civico at Palazzo Chiericati in Vicenza as a contemporary painter, within the international exposition Tutankhamon Caravaggio Van Gogh (2014-2015) – exhibitions curated by Marco Goldin; the solo show at Kovacs Gabor Art Foundation in Budapest, Hungary (2016); the exhibition Quattro pittori per Parise at the Museo di Santa Caterina in Treviso, within the exposition Storia dell’Impressionismo (2016-2017) and the solo show at the Basilica Palladiana in Vicenza on the occasion of the prestigious Van Gogh exposition Tra il grano e il cielo (2017).He also developed his graphic activity, which began in 1974, and was characterized by various exhibitions all over the world, among which the recent exhibition Flying Dreams curated by Stamperia d’Arte Albicocco at the Italian Cultural Institution in Melbourne and Sydney.Recently, some of his etchings became part of the collection of the Gabinetto delle Stampe degli Uffizi in Florence. Recently, he held solo graphic and painting exhibitions in Barcelona, Madrid, London, Budapest, Ljubljana, New York, San Francisco, Beirut, Taiwan, Melbourne, Seoul and Hong Kong.In December 2011 the New York Times dedicated to Massagrande the introduction of the Special Number of Art and he exhibited at the 54° International Venice Biennale of Art curated by Vittorio Sgarbi.Upon the request of the Basilica del Santo in Padua he painted Maria, Madre dei Giovani for the Sermig Arsenale della Pace in Turin. He painted the Portrait of Laura commissioned by the Francesco Petrarca National Institution. In 2015 he was asked to make the official portrait of the Patriarch of Jerusalem.Among the major intellectuals and art critics that wrote about his work we can recall: Paolo Crepet, Peter Fertöszögi, Marco Goldin, Bruce Helander, Milena Milani, Roderick Conway Morris, Ermanno Olmi, Enzo Siciliano, Edward Lucie-Smith, Mario Rigoni Stern, Anna Szinyei Merse, Dr. Pedro Tseng.His artworks are hosted at several museums, as well as public and private collections, all over the world. He lives in Padua and works between his atelier in his native city and the one in Hajòs (Hungary).He is a painter of time and light. He loves painting like few others, he cultivates it as an ancient language, which never dies.