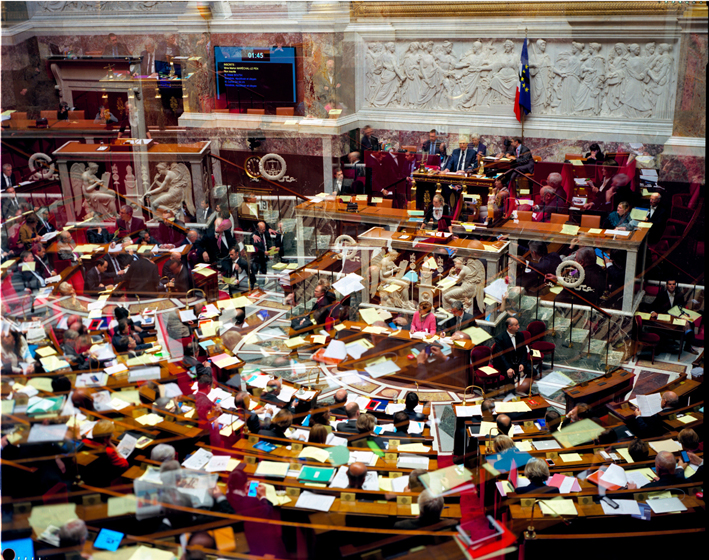 Since 2006 he has carried out projects named «Mediagenic», which examine the transactions of political life. The artist catches the images of those who govern us. To this end he gets into the pulsing heart of the exercise of power by mingling with the many journalists who daily broadcast the huge political and diplomatic spectacle. Meticulously, Olivier Menanteau dwells on the body language of the actors of public life. As he puts it, he uses “participant observation methods”. He thus gets involved body and soul in the analysis of the gestures and postures of the observed subjects. These works make you think about how complex the body is, as a dual space, that of language, but also that of culture.
In 2015, Olivier Menanteau was the Berlin correspondent of JBVnews agency. For six months, he lived and kept up with German political life, especially endeavouring to report meeting moments between Angela Merkel and François Hollande, between the German political world and the French one.

An interview with Florent Tosin and Olivier Menanteau, December 2015

F.T : Your work is very prolific; what is the purpose of this profusion of images?
O.M : Prolific, if not infinite, because how can you illustrate and account for social relationship otherwise. I am interested in what a person develops in society, what he integrates in himself, in his body from it. Aristotle names it physical Hexis, and Bourdieu, Habitus. It is about what you share with those around you by a relationship of authority, subordination or reversibility. Faced with these infinite possibilities, I have laid the foundations of a protocol, which allows me to catch and make images of this relationship.
Each image follows this protocol, then, in a way, contains all the images. The protocol in question works on three levels. First, it demands the choice of the field and a true “immersion” for a long time. It is based on the use of a large-format camera, type view-camera, for the shots, because it refers to a projective space, which allows the observer and the observed one to be related, apart from the simple fact of being there. It creates an imaginative and cultural relationship around this “black box” inside which something happens, and in which everyone can think himself to be at one time. The third point is the building, via the flow and the exhibition of the images, of a relationship with the person concerned, the group, the outside world. It goes from the contemplation of one’s own image reproduced, or flowing on the web, to the creation of another social space for the viewer: the exhibition.

F.T : More simply, what is shown?
O.M : More simply, let us say then that each image is the fiction of the relationship I have with the world. The aim is not to show reality, but rather how the observer, with his ideology, his history, and his prejudices is going to find a space-time continuum which is not his, but which is in others’ bodies. This encounter is the aim of photography.

F.T : Then there is no photo without “a photographer”.
O.M : Of course. It is the same as dancing with “ savages” to communicate with them. You must find a common language in order to make an image. The photo is the objectivizing of this encounter.

F.T : How do you think up such a thing in the face of a political power experienced in the techniques of self-representation?
O.M : Simply without giving up my working method, and with using a device integrating me into the political show. This is the case for my work on the French political world with the newspaper “la Marseillaise”*, as well as for my work in Berlin with “JBVnews”agency**. With these two projects, I have been able to integrate the political world thanks to their accreditations, but also by making myself (or trying to make myself) regarded by the actors of this spectacle as belonging to it, as a fellow member.

F.T : Why have you chosen to document the French political world in black and white, and the German one in colours?
O.M : First of all, the choice of black and white for France is due to the necessity of developing the negatives and sending the images to the editorial office of “la Marseillaise”, before the deadline every evening. I did everything myself, at home
But I realized the golden and purple tints of the Palaces of the Republic are so imposing that in the images, they hide the places of the “actors’” bodies. Nowadays, the French political world lives and thinks in such a rich, visually overfilled with History scenery, still called the National Assembly: Palais Bourbon!

F.T : When I see your photographs, I feel and touch these great political wildcats, but you cannot manage to voice things as simply as your images do…
O.M : Indeed, this is why I am a photographer… It is difficult for me to “criticize” the persons I take photographs of. Fieldwork makes me realize positions are reversible, and takes me back to the space of the one whose photograph is taken.
F.T : The choice of black and white for France, and of colours for Germany reminds me of a debate about the passage to the XX1st century Germany seems to have achieved, and not France. Besides you refer to Erich Salomon for this work, and you use black and white only to document the political French world.
O.M : I think, and this touches me, that Salomon, in his photos, meant to show a passage: the end of an age with the powerless League of Nations, and the negotiations, which will result only to the outcome of National Socialism. In Germany, there has been Reconstruction, self-criticism, Bonn, the capital of West Germany, and today this new capital of power in Berlin. The reference to Salomon is not present from the point of view of form; the places have become “modern”, even postmodern, like the famous Bundestag. I have noticed that the political community is also representative of the lay society. This is not the case in France, and the end of the Weimar Republic rather calls up what is happening here, with the rise of the extreme right, in a fifth Republic on its way out.

F.T : How do you deal with reality, this society of the spectacle, generally emphasized by the media?
O.M : Actually, there is no difference between a psychiatric hospital, a car plant, and life in the Senate. Relations are formed, sometimes complicated, but there are rules everywhere: this is what my work is about!
There is no in, no off, no backstage of the power, but power is everywhere at work.

F.T : Right, but there are reporters trying to catch the historical instant…
O.M : Of course, reporters on the look out for the anecdote easy to sell continually scrutinize political people. Here is the difference. Reality is a spectacle: it is only the encounter of an image got thanks to a digital camera viewfinder and money. That is why it is spectacular. Another medium wipes out this exchange, shifts the point of view, not only of the operator’s, but also that of the viewer’s.

F.T : After the two exhibitions we had in Berlin: one about the United Nations and the Lithuanian government tackled the consequences of globalization and History; the other one, about Norodom Sihanouk’s death, dealt with post-colonialism. With the Franco-German one, can you say you return to a subject about the idea of territory?

O.M : After ten years in Germany, my coming back to France is being connected at once, definitely to its language, its cultural innuendoes, and of course its territory. When I take photographs of the German political world, I partake of its culture –partly because of my family history- but above all, for its being a culture of images, memories, films, photos, linked, therefore, to the territory.
In both cases, I start with more “prejudices” than in Brazil or Lithuania.
Regarding France and Germany, I also hoped to share and become integrated into interpersonal relationship more strongly, and learn, or rather imitate the reporter’s language with its visual references . Thanks to my knowledge of the field (territory?), I was able to manage this connection with a newspaper and an agency.

*Cf Mediagenic-La Marseillaise, a CNAP order. National Plastic Art Centre.
**The sponsorship committee of the National foundation of graphic and plastic arts has selected this project. It was carried out with the help of DRAC Ile de France, the Ministry for the Arts, and with the support of Jean Bernard Bernier from JBV news agency and Ile de France photographic centre.