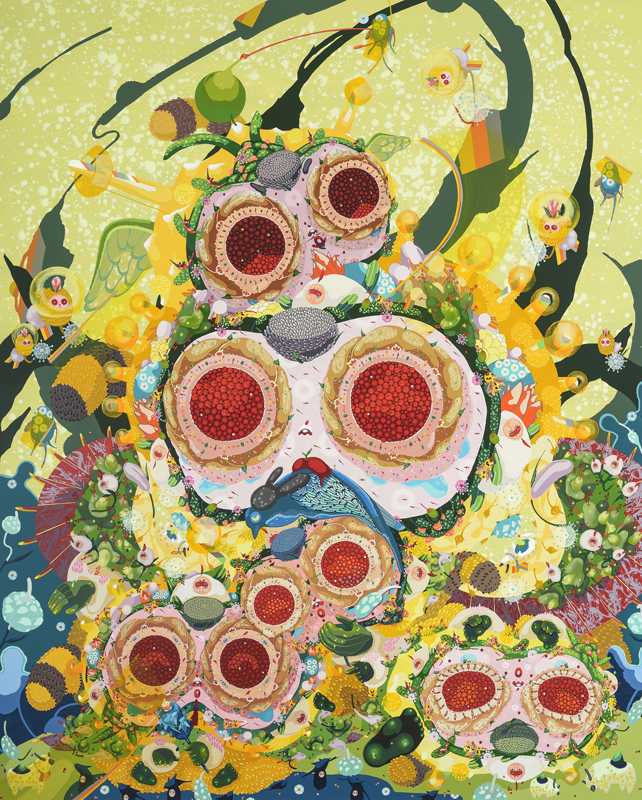 On these short and cold winter days in Copenhagen, there is no better encouragement than the Korean-born artist Mi Ju’s exuberantly constructed universes full of life, light, and movement. And that’s exactly how we begin 2016 at Gallery Poulsen, when we present the solo exhibition “Yellow Cocoon”. Mi Ju’s last show with the gallery was in 2013, so this show is long awaited and not least a very welcome and colorful contrast to the grey days of January.

Mi Ju could be characterized as an architect of invented natural forms. Tiny, seemingly countless quirky characters function much like the building blocks for deep, complex compositions. As a result of this unique technique, new forms, patterns and contexts continuously emerge with each exploration.

With “Yellow Cocoon” we are drawn into an open theme of family and home, with yellow acting as the connecting ‘red thread’. Different family structures and generations are explicitly portrayed in works like ”Family Portrait”, ”Friday Feast” and ”Blue Sheep”, where creatures with immense eyes are united in an explosion of colors.

Nature and its marvelous mechanisms are an unavoidable subject in Mi Ju's works. Both in large and small scale, nature is an ongoing theme and where Mi Ju gets her inspiration. With the cocoon or pupa as a symbolic image of all beginnings, we are reminded of the microscopic and miraculous processes that nature constantly generates. Usually we cannot see them with the bare eye, but in Mi Ju’s works we are presented a concrete, overwhelming image.

Although the nature is the most refined kind of structure, Mi Ju certainly reminds us, that side by side with this order, we find chaos, dreams and magical phenomena. The secretive character of the cocoon is an evident picture of such an amazing process, where the road from one state to a completely different one seems extremely short and enigmatic.

In Mi Ju’s works we are exposed to the exact same kind of remarkable interaction in the interpretation of the work. Mountain landscapes become one figure’s pupils, big fish become small hats, and abstract repetitions become organized patterns on a shirt. It’s a fantastical world with oceans of layers for discovery, both when it comes to the understanding of the intricacies work of the larger picture and its physical relief-like gestalt composed of canvas, acrylic, applied cut paper and thread.

We present Mi Ju’s yellow cocoon, welcoming you to a range of inspirations from the family’s background in textiles and floral design to emergence patterns, Buddhist temples, Aboriginal topographical art, swarm behavior, and Native American totems. What a wonder that the little fragile and microscopic residence of the caterpillar can be transformed into such an explosive and colorful macrocosm!

Mi Ju will arrive in Copenhagen Thursday January 14th and will be available for interview and present at the opening Friday January 15th from 5-7 pm. Contact Morten Poulsen at +45 3333 9396 / info@gallerypoulsen.com for further inquiries.