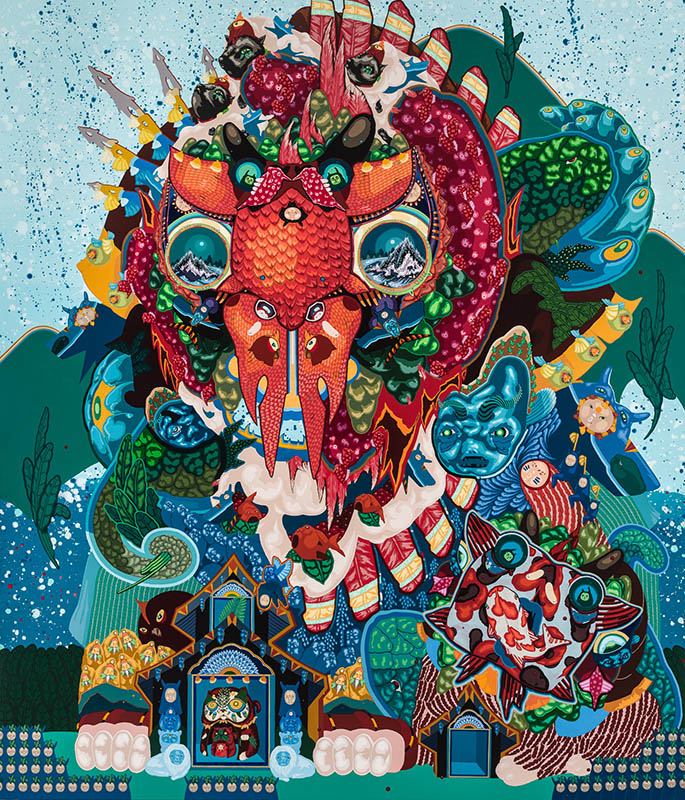 Flower buds bloom and bees swarm to get nectar. Birds migrate south chasing warm weather. Creatures roam the ground foraging and looking for prey. On the forest floor, insects and micro-organisms decompose the flesh of rotting mushrooms and fallen fruits.

Each piece in the exhibition opens up a kaleidoscopic world, where myriads of animals and figures constantly mutate, and new forms reveal themselves. Intense color palettes and intricate patterns occur and dissolve over and over again. Mi Ju draws us deeply into her coral reef of mythical creatures in a visual explosion of coloristic dimensions. Thus, the mood is set when we kick off the fall season with Mi Ju’s roaringly alluring solo show “Within Blue”.

This is the third solo show from the skillful hands of Mi Ju under the auspices of Gallery Poulsen. Having been a solid component in the artistic team of the gallery for many years and with exhibitions all over the US, Korea and Denmark, Mi Ju is both well-versed and well-established in the international art scene. We can therefore guarantee a marvelous and quite overwhelming outbreak of countless living organisms that swirl around in swarms as they settle inside the gallery as their new common habitat.

“Within Blue” depicts the coexistence between all living organisms, each carrying a story. Mi Ju has created an exhibition that transforms the gallery into an extended coral reef system, composed of billions of colorant microorganisms. As we move around in the exhibition, it becomes clear that not one angle shows the same composition. Both refined and recognizable symbols simmer in an interaction between chaos and organized hierarchies, pointing out clear references, Mi Ju has found in ancient tribal cultures from bygone eras that honored nature’s spiritual revelations.

Once we give in and let ourselves swirl into Mi Ju’s visual formations, we will start to notice a number of microscopic symbols far inside the canvas. The attentive viewer will discover that among uncontrollable fabled animals and life-giving flower seeds, a layer of Mi Ju’s family origins is hiding, which, after more than 10 years in the United States, embrace both American and Korean cultural identity.

“Birds on the Border” is Mi Ju’s tale of the two poles that constitute the Korean peninsula. Two birds sitting face to face, beak to beak with a piercing gaze, revealing respectively the South Korean and North Korean flag in their pupils. Her personal memories of the motherland as well as fragments of her moving about in her surrounding world create a personal and concerning pulse in her works that vibrate in insistent frequency.

Step inside and emerge yourself completely in Mi Ju’s endless cosmic concoction of chaos, zen, past, present and not least imagination.

The exhibition shows 18 vibrant acrylic paintings.Contact the gallery at info@gallerypoulsen.com or + 45 33 33 93 96 for further information