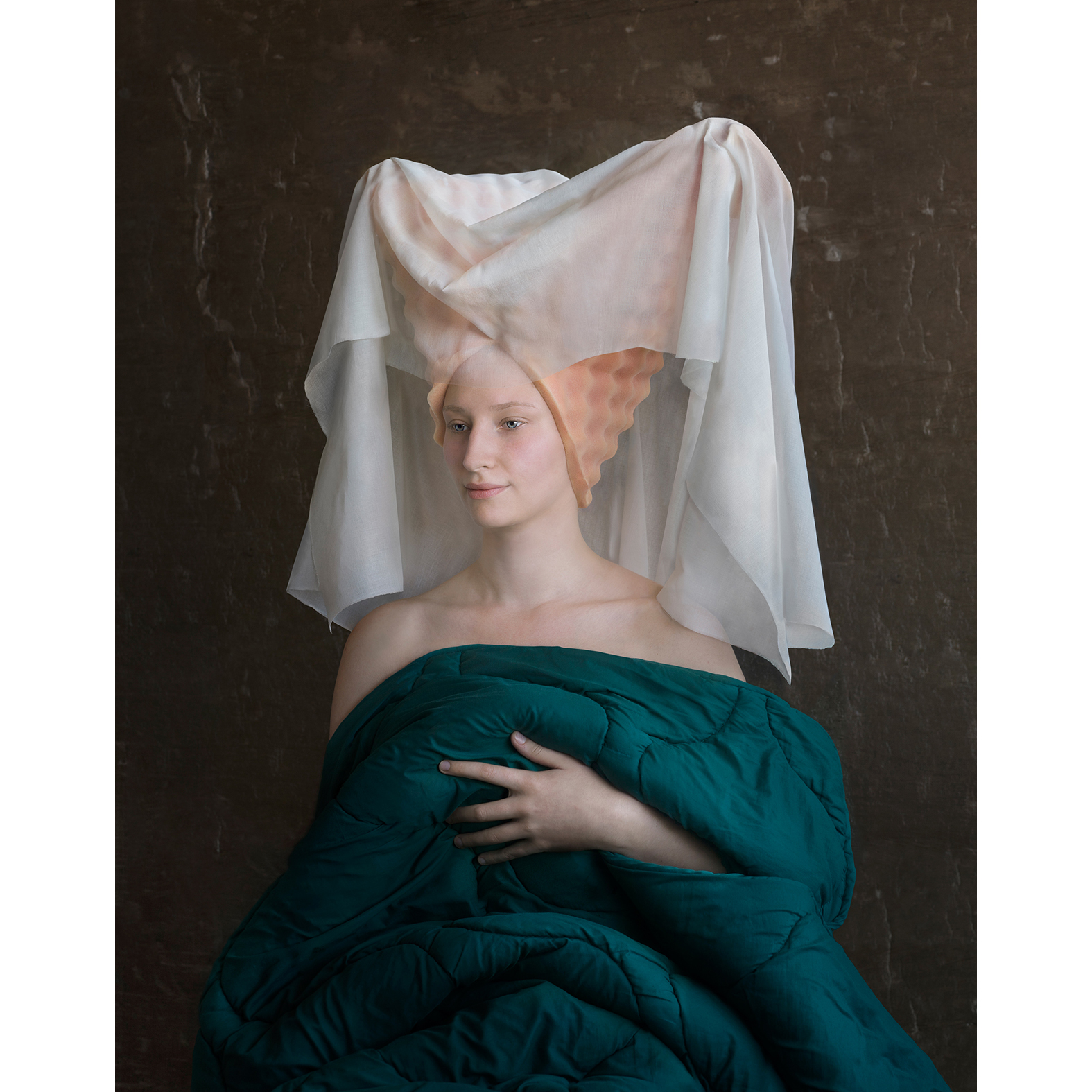 On November 3th Galerie Wilms will open a large soloexhibition of Suzanne Jongmans which will give an overview of several years of work. At this day her new book ‘Moving through contrast’ will also be presented. The exhibition will be opened by Anneke van Wolfswinkel, artcritic and writer.

The ‘menina’ of Velasquez, Arnolfini’s pregnant wife in the Van Eyck portrait, and Rogier van der Weyden’s veiled ‘lady’: Suzanne Jongmans brings them to life in her photographic portraits. This nod to the old masters of the 15th, 16th and 17th centuries – certainly also to Rembrandt and Vermeer – is only one aspect of her work. It is all about tranquillity, timelessness, beauty. Qualities she discovers even in disposable material such as packing foam and tin, with which she meticulously designs the exquisite costumes for her models – a subtle critique of our consumer society. And so layer after layer accumulates in her oeuvre, contrast after contrast. Between classic and modern, light and dark, life experience and childlike innocence.

Suzanne Jongmans (Breda, The Netherlands, 1978) is an interdisciplinary artist. She is a seamstress, sculptor, costume designer and photographer. She held her first solo exhibition at the European Economic and Social Committee and has also exhibited at the Welt museum in Vienna. Her commissioned work includes a campaign for Valentino/Moncler and she has been featured in the international press (The Washington Post, on CNN and Die Deutsche Welle).

Special EditionsTo help realize the book there are two Two Special Editions being issued. These consist of the book, packed in a beautiful sleeve, together with one original photo print. This beautiful photo is printed on Canson Fine Rag paper and signed and numbered in an edition of 100 copies per photo. Pre-sale price of these Special Editions is € 350,-

More info about Special Edition #1 in the webshophttps://galeriewilms.nl/shop/artwork/suzanne-jongmans-special-edition-1/

‘She creates a tension and a meeting between the classical and the modern, the constant and the fugitive. Her images radiate an immanence, through the mundane scraps, we glimpse the divine.’Karen Van Godtsenhoven, associate curator of the Costume Institute at the Metropolitan Museum of Art (New York)