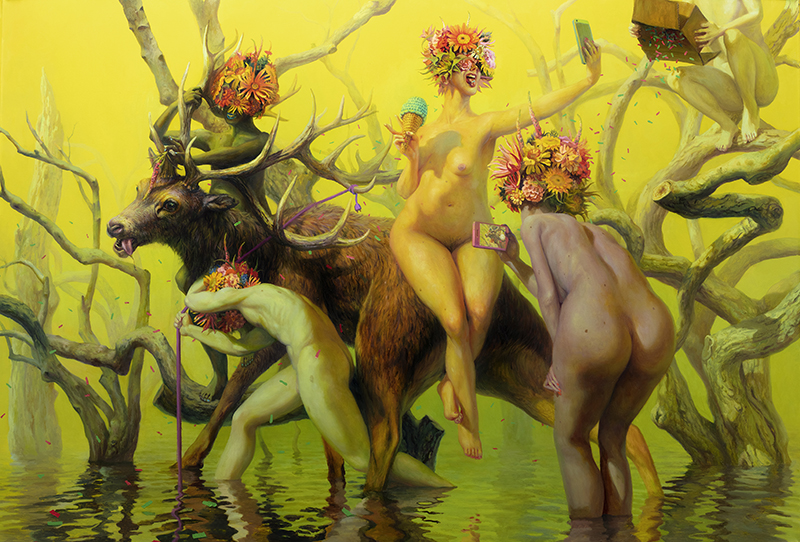 In the wake of the global pandemic there are many questions to be asked. One of the questions that Taylor Schultek, Adam Miller and Martin Wittfooth have been asking themselves is: “How has the pandemic, and the political and social upheaval experienced during this time impacted culture?” These essential issues are addressed in our three-man show New World Disorder opening April 10th. In the exhibition the three artists are sharing their perspectives on a society after the crisis. What kind of world will we experience post lock-down?  Adam Miller uses a historic perspective to find parallel stories and myths that reflect our current situation in a search for answers and understanding. Taylor Schultek investigates the values of communication and language that have become much more apparent after a period of intense division, and thirdly Martin Wittfooth, explores the intersection of the manmade and natural worlds, keenly brought to focus in the chaotic turmoil at the start of this third decade of the century.  Adam Miller’s main painting in the show is called “Bacchae”. The piece represents the moment King Pentheus is killed by the followers of Bacchus, the god of wine, whom they attempted to bar from entering Thebes. More and more of the townspeople and even his own family joined the rights, unable to resist the pleasure and search for transcendence while Pentheus attempted to hold the old order of the city steady. Finally, he went out to see for himself the dancing women and rituals. Under the influence of a hallucination the women from his own family mistook him for a boar and ripped him the pieces. Referring to the theme of the show, this scene marks the moment where new forces arrive in a society, bringing disorder and change and in the act of resisting, the king or traditional powers are overthrown by the madness sweeping the people.  In the new paintings “Influencers” and “Beach Day” Martin Wittfooth introduces human figures into his work – previous to this exhibition, his works have been absent of them – as a reflection on the way that we have placed ourselves centrally within history’s unfolding narrative. The self-staging and the attempt to make ourselves the star of our own lives, as manifested in our increasingly ubiquitous relationship with social media, removes us from the physical, real world and instead we live an artificial life online where success is measured in likes. In these new works, we’re no longer simply influencing the world around us, but have become addicted to the notion that we occupy a star role, where content doesn’t matter, it’s all about ME! The addiction of approval and recognition we can achieve on social media here and now is like a fix, as soon as the intoxication is over, we are already working on the next, fresh thing, and this cycle then repeats itself. This vacuum of awareness of wider consequences is looked at in the paintings “Petroleum” and “Borealis”: the forced adaptation that must occur in the wake of this disruptive dynamic.  With the painting “Mediated Networks” Taylor Schultek addresses the late phone box, which was phased out and replaced by the cell phone during the 1990s. With the proliferation of the cell phone, the opportunity of total surveillance has become a reality, which Taylor focuses on in the painting “Titanpointe”. The painting depicts a real building, the former AT&T building on 33 Thomas Street, Tribeca, New York. In 2003 Edward Snowden revealed that this building was hiding a secret. A big part of the building was owned and driven by NSA, which was unknown to most of the employees at AT&T- The building had the code name Titanpointe under operation X and was a part of the American government’s daily surveillance of 175 million calls a day for long-distance and international communication. The brutal fortress-like building – devoid of any windows – is the perfect exemplar of the government’s surveillance of its own citizens in collaboration with multinational mega companies.  With New World Disorder we continue the line of exhibitions that have been created during the era of the worldwide pandemic. The artists’ snapshots of the world and how they invite us to reflect on these times emphasizes the importance and significance of contemporary art. We look forward to welcome you in the gallery.  New World DisorderTaylor Schultek, Adam Miller & Martin Wittfooth10.04 – 08.05 2021Vernissage Saturday April 10th  from 12-4pm The exhibition shows 13 oil paintings on canvas, linen and panelsContact the gallery at info@gallerypoulsen.com or phone + 45 33 33 93 96 for further information