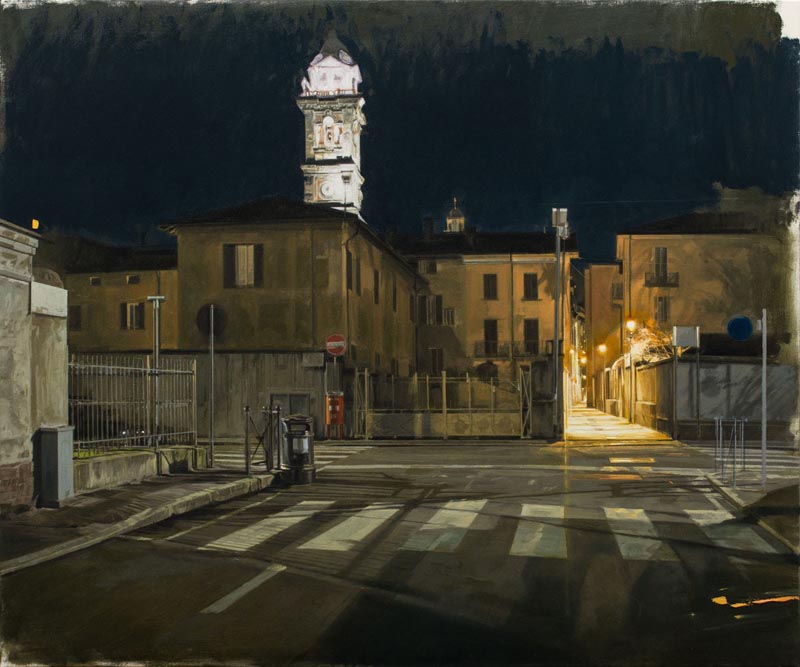 Artist of seductive painting, profoundly tied to tradition, in this new solo show at the PUNTO SULL’ARTEgallery NICOLA NANNINI presents a series of 14 unreleased paintings in which one can see the complete evolution of his endeavours up until today. OPENING RECEPTION SATURDAY 4 MAY 6PM-9PM.Night is protagonist, that of the city – found in the glimpses of central Europe but also in Varese itself – and that of the country, snowy, closer by nature to the landscapes of the Ferrara lowlands with which the artist made himself known. His wandering in space in search of the soul of places (from Germany to the Czech Republic and Slovenia, from the countryside of southern England to the desolate streets of the southern United States) is also a journey through time, with suggestions that range from the Vermeer of the View of Delftto the enchanted light of Edward Hopper. In the paintings Vicolo di Caronteand Notte in giallo, the same place is framed by two viewpoints, which already highlights how it is not so much the subject that interests the artist as the possibility of enchanting the viewer with the precipitating perspective, with the artificially lit points of light which create phantasmatic presences, or with the play of brushstrokes, apparently so defined as to show us each brick, but in reality powerfully impressionist up to – in the foreground – the expressionism of the unfinished. And then the winter night, immersed in snow, gives Nicola Nannini the chance to slip from the warm lights of the city night to the cold shades that gather around the whites, the greys, the greens, the icy neon yellows. The viewpoint here is narrowed to a precise subject that the artist places at the centre of the painting, personalising it like an icon. The road that loses itself in the countryside, the low building with the silos next to it, the lonely building with those two lit windows, the red villa under the looming leaden sky, stare into our eyes, look at us, talk to us and tell us stories.The exhibition is accompanied by a bilingual catalogue containing Alessandra Redaelli’s critical text, and a reproduction of all exhibited works. The artist will be present at the vernissage. NICOLA NANNINI: was born in Bologna in 1972. After classical studies he graduated from the Bologna Fine Arts Academy with the highest marks. From 1994 to 2018 he was a drawing and figure teacher at the Cento Artisan School of Art, and since the early 2000s he has been professor of painting at the Cignaroli Academy of Verona. His institutional studies completed, he conducted his own training independently through contact with the works of great masters of Italian and European art, from which he assimilated the techniques of painting, drawing and graphics. These instances merge in his works, where the constant dialogue with his own cultural education is an integral part of the poetry. Nannini tackles thematic cycles ranging from the cataloging of human and urban typologies to landscapes of broader and more lyrical breadth, marked by an almost contradictory ambivalence, but aware of symbolist (or romantic) needs on the one hand and rationalistic aspirations on the other; in the desire to clearly catalogue the surrounding environment and its peculiarities. Protagonist of many personal and collective shows in Italy and abroad, he has exhibited in private galleries, public museums and foundations. He is referred to in many publications. He lives and works between Bologna and Vicenza.