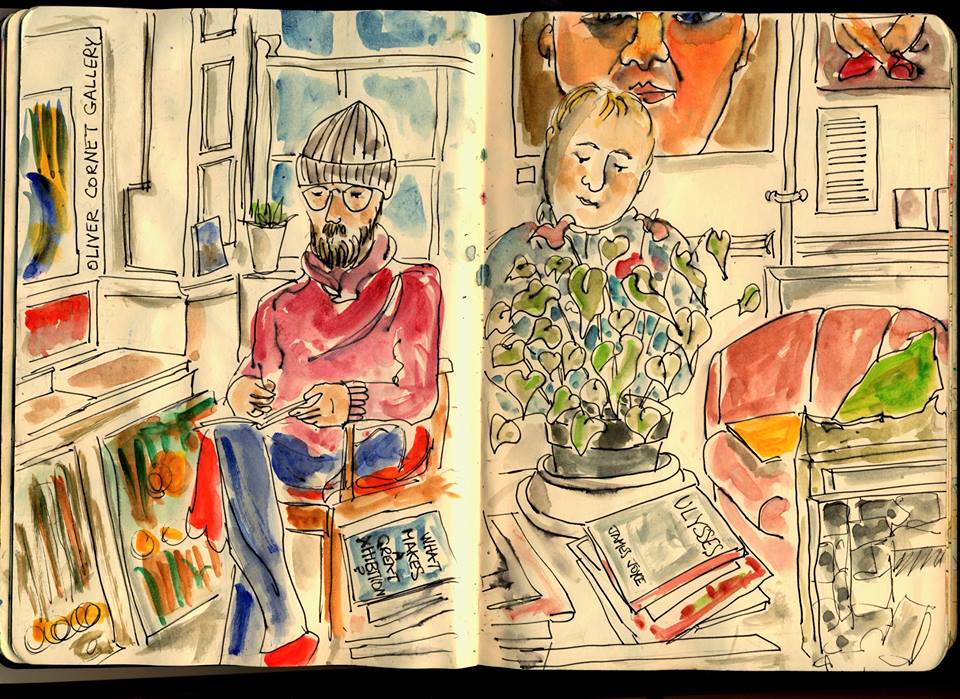 The Olivier Cornet Gallery is delighted to present ‘There’s a touch of the artist about old Bloom’, a four-day sketching event followed by a group exhibition.

“From day to day, their molecules shuttled to and fro, so does the artist weave and unweave his image”. Ulysses, James Joyce.

Ulysses is about the relationship between individuals and the city they inhabit, it deals with memory and meaning, the mundane and the fantastical. The aim of the exhibition is to create a dialogue around these ideas through the personal visions of the artists involved.

There’s a touch of the artist about old Bloom is a visual response to Ulysses through sketching on location in the Parnell Square Cultural Quarter of Dublin. Curated by the Olivier Cornet Gallery, Jessica Peel-Yates and Marie-Hélène Brohan Delhaye, this four-day sketching event will explore the fabric of the James Joyce’s Dublin, real or imagined.

Participating artists are drawn from a number of disciplines (fine art, illustration, architecture, animation, costume and set design as well as graphic design) where drawing and sketching are an important aspect of their work; either as an end in itself, as a way to develop ideas, or as part of their creative process.

The sketching event will run from Saturday 10th to Tuesday 13th June in locations connected to Ulysses. Joyce famously declared “If Dublin were ever to be destroyed, it could be rebuilt from the pages of my works.” The focus of the event will be the Parnell Square Cultural Quarter, an area which features in many parts of Joyce’s modernist masterpiece.

The event will be a celebration of on-location drawing and sketching. Participants will be inspired by Joyce and Ulysses to reflect on the relationship between an individual and the city they inhabit. Sketching styles will be influenced by the background of the participants who are drawn from a number of communities (such as Illustrators Ireland, Dublin Sketchers, and The Royal Institute of Architects).

On Saturday 10th June the main focus will be around Eccles Street and North Great George’s Street. Sunday 11th June will find the event between the Rotunda and Blessington Street Basin. Monday 12th June the participants will be between Ormond Quay and Little Britain Street. Tuesday 12th June will be from Talbot Street to Middle Abbey Street and down towards Bachelors Walk.

The exhibition of the sketches and drawings selected by Marie-Hélène Brohan Delhaye, Olivier Cornet and Jessica Peel-Yates will open at the Olivier Cornet Gallery on Bloomsday, Friday 16th June 2017, 7pm. All welcome.

The show, which will also include a selection of sketchbooks, will run until 25th of June and a series of events will take place at the gallery during that week.

We are delighted that this exhibition has been included in the Bloomsday Fringe Programme of the James Joyce Centre’s Bloomsday Festival.

A high resolution image of the one published on http://www.oliviercornetgallery.com/#/exhibitions-bloomsday-2017/4593767748is available on request.