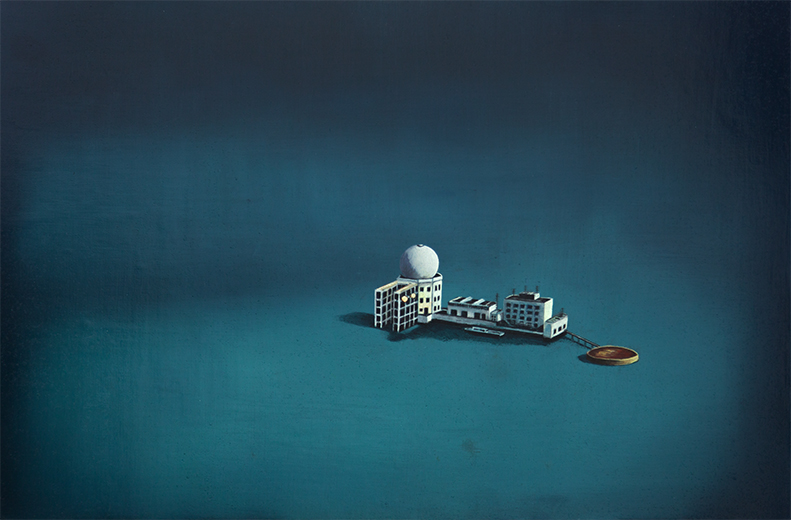 “My work explores themes and concepts around contested territories and histories through painting, drawing and installation. This new body of work attempts to navigate the complexity of the contemporary theatre of war as battlefield expands to battlespace in the information age. The means, methods and technologies of modern warfare from mass clandestine surveillance programmes to unmanned warfare and its real time reporting through the lens of the media. The paintings employ imagery from the media, surveillance, military history, maps, archaeology, early civilization, bible stories and from the canon of art history of Byzantine and Early Renaissance to weave together a narrative through painting. I am influenced by the complex compositions of space and time in Renaissance paintings allowing multiple narratives to co-exist in the same picture plane and use these compositional devices in my work with reference to the aesthetic of gaming and virtual reality. In the Citadel Series the images are isolated from source and context like props suspended in time without context as to their significance as elements in a complex narrative of a contested territory The themes in the work concern the perception and interpretation of images. – how the reading of images and their resonance is influenced by how they are created, depicted and the context in which they are viewed. I strive to create work that raises questions about how we choose to record history and the veracity of painting, photography, and the media in documenting future history.” Claire Halpin, August 2016

About the exhibition title: Glomar Response In United States law, the term Glomar Response refers to a “neither confirm nor deny” response to a Freedom of Information Act request. The Glomar Explorer was a large salvage vessel built by the Central Intelligence Agency (CIA) for its covert Project Azorian – an attempted salvaging of a sunken Soviet submarine in 1974. Aware of the pending publication of a story in the LA Times, the CIA sought to stop the story’s publication and devised the “Glomar Response”. So as not to divulge to the Soviet Union either what the CIA knew or did not know, the response read: “We can neither confirm nor deny the existence of the information requested but, hypothetically, if such data were to exist, the subject matter would be classified, and could not be disclosed.”. The original text was written by Walt Logan (pseudonym), Associate General Counsel at the CIA.The Glomar Response precedent still stands, and has bearing in Freedom of Information cases today.

“Glomar” is the abbreviation of Global Marine, the Howard Hughes company commissioned by the CIA to build the Glomar Explorer.