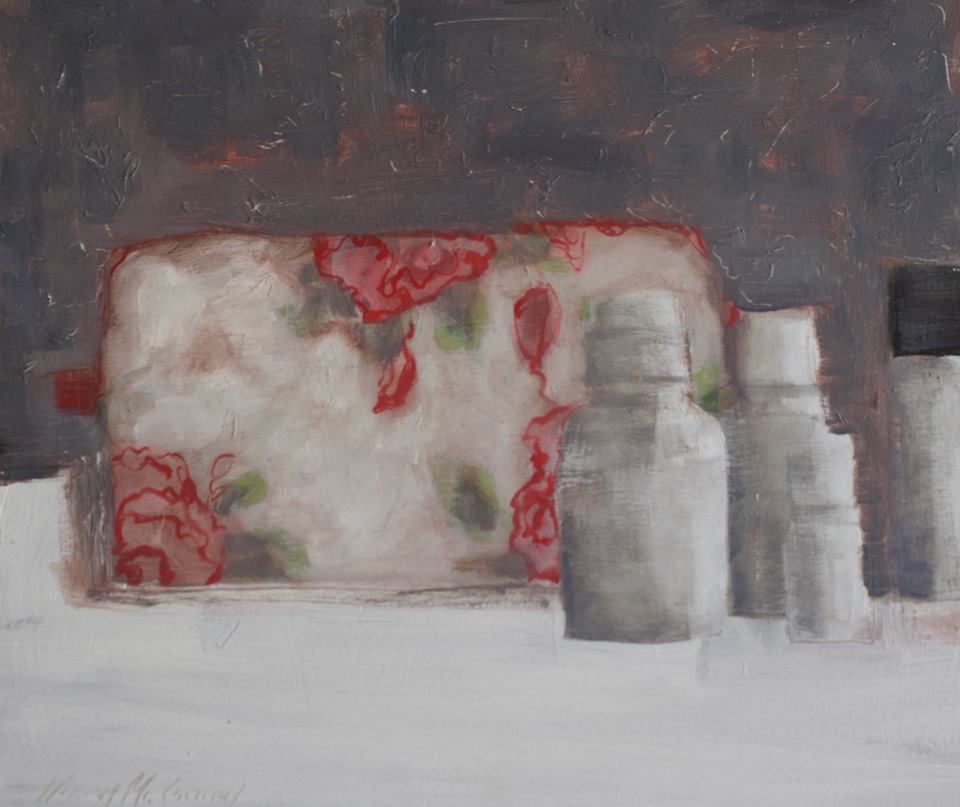 The Olivier Cornet Gallery is delighted to present ‘In Life’s Pocket’, a solo exhibition of work by gallery artist Miriam McConnon.

The exhibition runs till the 5th of November 2017.

Miriam McConnon’s recent work presents paintings and drawings of domestic objects. She is preoccupied with the nature of these objects and their narratives. The work is concerned with the human connection to the domestic object.

She re-presents these everyday objects in a new context in order to highlight an intimacy about them and to expose the power they have to reveal certain aspects of the rhythm of life.

In McConnon’s work the chosen objects are sometimes re-contextualized. The background becomes placeless and is shrouded in pattern. This pattern creates a sense of nostalgia around the object, its sense of security, seeking to preserve its memory through decoration.

The large scale drawings in the show, reflect the overwhelming effect of domesticity on our lives. McConnon multiplies the objects across the picture, creating partitions of plates, walls of cups and caverns of crockery.

In this show ‘In Life’s Pocket’, McConnon’s work aims to trigger a social and a personal association with the objects it presents, touching on the theme of how domestic objects are connected to gender association. We are presented with a line of suits are on the march, a house coat that has being hung up and stilettos that are in a line ready for battle. This preoccupation with gender association and the domestic object is perhaps most evident in the large scale drawing “Dolls”. In this work, a tailor’s mannequins stand on display. They are torn at the chest. The measuring tapes around their necks weigh them down. In this more feminine pocket of life, strength meets vulnerability, reflecting the complexity of gender association in our domestic world.

Miriam McConnon’s recent projects include representing Ireland and Cyprus at The 8th Beijing Biennale at the Chinese Museum of contemporary Art (2012, 2015), International drawing Biennale and Symposium, Pilsen, Czech Republic, Biennale of Drawing, Wroclaw, Poland (2012, 2014), The outdoor installation, “The Megalo Tama”, in Paphos, Cyprus which was commissioned for Cyprus’ Presidency of the EU in September 2012, “The Touring Tama”, an outdoor installation in Dublin’s Merrion Square to commemorate Ireland’s presidency of the EU( 2013) and ‘Common Ground’, a bi-communal art project for Paphos 2017 with Turkish Cypriot and Greek Cypriot children. Miriam’s Future projects include the public installation ’ House of Letters’ and The Myth of Arodafnousa, a public cementography artwork, Paphos town 2017. Both projects are events for Paphos 2017, European Capital of Culture. McConnon also participated in the ‘Concerning the Other’ collaborative art project which was exhibited in September at the Olivier Cornet Gallery Dublin and which will be touring in various venues in Ireland and abroad in 2018-2019.