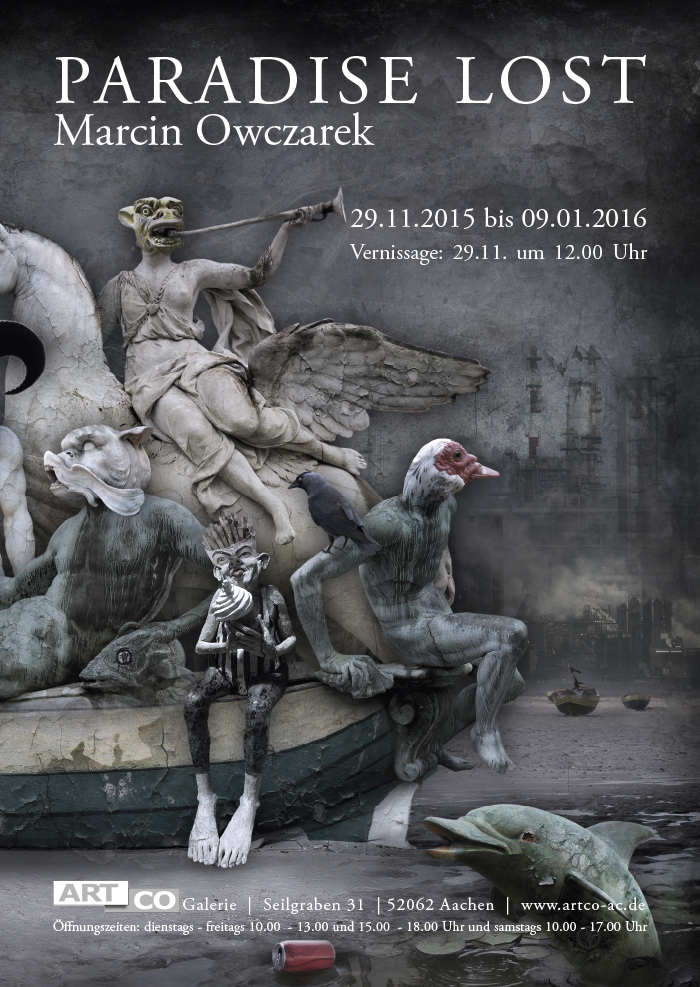 During the upcoming solo exhibition Marcin Owczarek will present works from the new series “Paradise Lost”.

The title refers to the biblical ‘Garden of Eden’ (Paradise) created by God for the the first man and woman – Adam and Eve. It is believed that God formed human beings to live in a Paradise and told them to to multiply and coexist with animals, plants and everything else that God had made. It was the time of innocence, the first humans lived with God in the harmony with Nature. The rivers and lakes were crystal clear, no thievery, no sin was known. In the garden God placed the Tree of the Knowledge of Good and Evil which fruits were prohibited from eating, but Adam and Eve ate the fruit from the forbidden tree. In consequence they were banished from the Paradise. The expulsion was a fact. The Paradise was lost.Consuming the fruit was called the original sin and subsequently became known as the Fall of man. The fall corrupted the human nature including the entire natural world. Since that moment humankind became mortal, the state of innocence passed away, the present world full of suffering and injustice occurred.

Regarding the fact that the main aspect of my art is human condition, I tried to find the best metaphor for the current period of my art. Then I recall about that ‘mythical catastrophe’ called ‘The Fall’. Hence I decided to use it as a conceptual spectrum and metaphor for my own subjective reflections which are taken from contemporary world. In this way I named the cycle of photographs ‘Paradise Lost’. In my view this title binds perfectly the ”fallen past”and 21 century. In my cycle the idea of degradation of the first humans is connected with the fall of humanity through the centuries up to nowadays. The title is symbolic and describes the state of being away from the sacrum, the lack of justice, the weakness of will, tendency to moral evil, jealousy, hypocrisy, greediness, wars.

What is the meaning of Art in Lost Paradise? My intention was to conduct investigation into the depths of human existence. Pictures which move the audience and force to serious reflection. In my narration the journey begins in the „biblical times” , goes through the Ancient Greece, indo-european cultural myths and finally meets contemporary societies. My artworks belong to our daily life, but as I mentioned, I intentionally refer to the past and anticipate the future.

If it is said that that humanity is in essence a single family, with everyone descended from a single pair of original ancestors. If it is true – why do we fight and do not respect each other? Why man proved to be so destructive and has devastated the planet so intense? At the same time wiping out most species of animals know from the Paradise – elephants, rhinoceros, wolves, seals, fishes.

The exhibition will take place at ARTCO Galerie in Aachen, Germany. The Gallery was founded in 2003 by Jutta and Joachim Melchers.
ARTCO is situated in the heart of Europe, close to Cologne, Düsseldorf as well as bordering Belgium and the Netherlands.