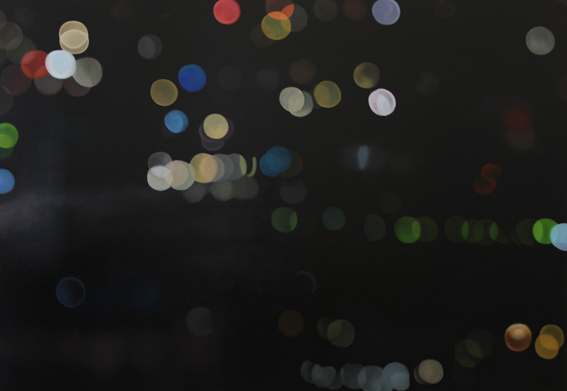 Pascal Danz was not just an artist of the gallery but also a friend. A friend with whom one could be passionate about art and fight about it, who was well informed and who had his own opinion. When the date for his next exhibition was set, the preparations had always the same pattern: approximately half a year before the opening I went to his studio – and Pascal had there already an „idea“, which was sampled on a model of the gallery and a good part of the work for the implementation of the idea was finished. By coffee and water we discussed possible titles for the works and the exhibition, and then we went to dinner. Most of the time in one of his favorites fish restaurants next to the lake. One month before the exhibition I got appointed to the studio to examine the production and to compare with the model – a few final works were still in progress but the most were ready for the exhibition and varnished. In the last two years the varnish was for Pascal a kind of obsession, the mixtures were hold as a secret and he sampled always new formulations. He was one of the last artistes, where the term „vernissage“ (franz. Vernis for varnish) was appropriated.

In the spring-time 2015 we had the last solo exhibition in our rooms, „brain tattoos“, a wonderful confrontation between remembrances of his childhood in South Africa and opulent, large-size flower canvases. And then arrived the date of his beloved travel to Iceland. In the late summer I was once again in the studio at the lake of Zurich, about two weeks before he wanted to leave. This time we had no fish but a hearty beef salad with chips served in a little beer garden in town. He was looking forward to the new impressions and the travel by car on the volcano island. The latest paintings were already packed, among others for the planed group exhibition „About Painting“, who should take place in January 2016 at our place at the Waisenhausplatz and at the gallery Kornfeld. On the floor there were piled small boxes filled with canvas and papers, in Iceland the sight should been new captured, after an intense study with the genre of still life. And then at once Pascal had a tragic accident on his beloved Iceland; he was suddenly not here any more and left a giant gap.

In the suite I was assigned to inventory the estate of the artist for the inheritance, a very emotional business, as many artworks were companions on our common way. And there it was, that compartment in his studio, above where he had adhered a note: „Bischoff“. Pascal already finished peaces for the next exhibition in Bern. He told me in the late summer that he did not want to take the entirely work urge with him to Iceland and therefore he already had worked on oeuvres, but he did not want to show me the peaces jet. And those pictures that I have never seen before were in that compartment. A few new still lives in grisaille painting and next to them a big night picture. On that moment forward I knew: In Pascal’s honor this should be his planed exhibition, the implementation of the main features of his idea.

„Before the journey“ is a dialog between most of his final works with peaces of almost 10 years of painting. As supplement to the monographic retrospective at the Museum Franz Gertsch in Burgdorf (until 5.3.2017) our exhibition closes quasi the circle.