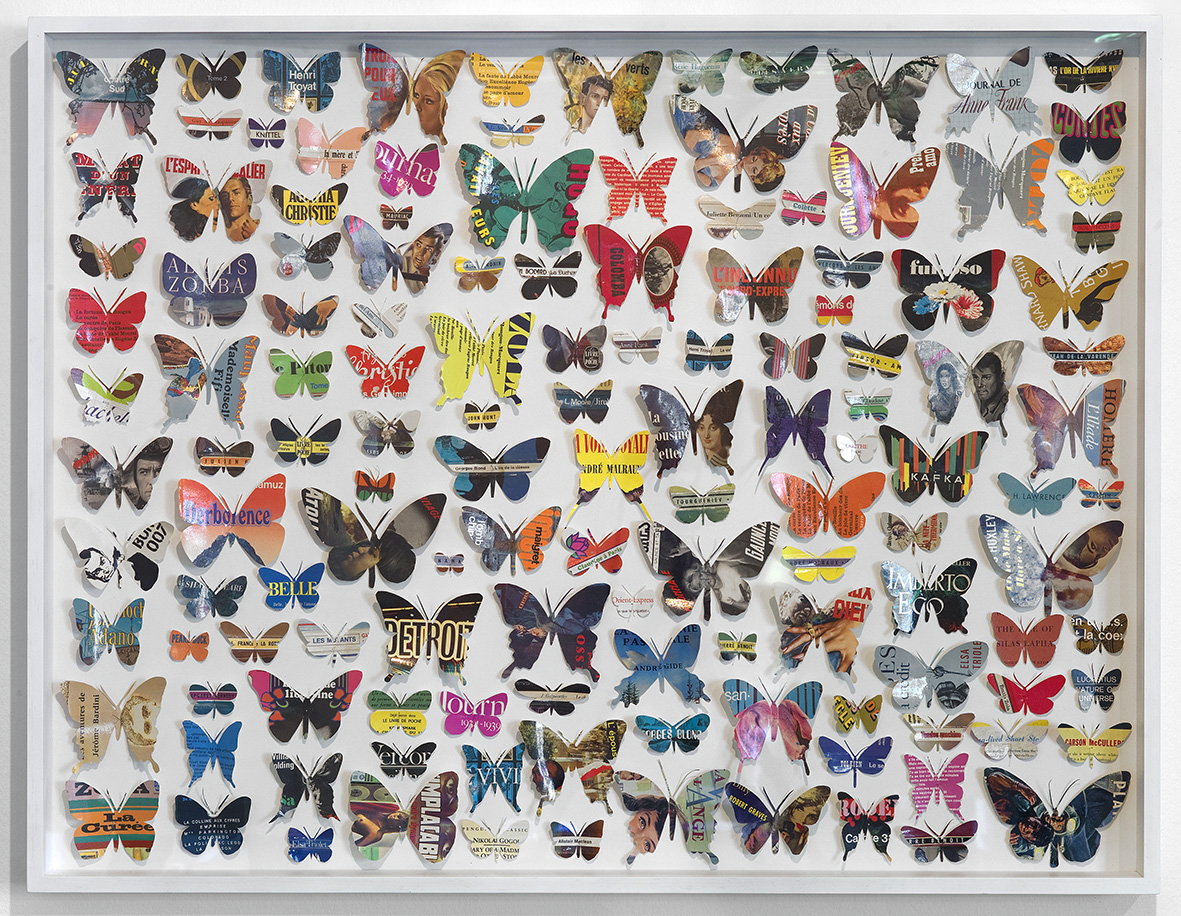 For a long time, the russian-american writer Vladimir Nabokov (1899-1977) exerts a great fascination on the artist Peter Wüthrich. Nabokov, who became famous in the 1950s and caused a sensation with his novel “Lolita”, was besides his activity as author as well a passionate butterfly researcher. He had an immense collection of such insects and discovered 20 kinds of butterflies himself.

Both the author’s novel and his passion for collecting exotic butterflies are the inspiring material for Peter Wüthrich. In the exhibition “Deep Storage Reloaded” the artist shows current objects, drawings and installations. He refer directly to Nabokov in two works. In the work “Humbert Humbert (2015)” the writing of the novel “Lolita” becomes the all-over of a draped bed linen. The printed paper transforms into soft fabric. “Buchfalter I (2015)” is a reminiscent of a prepared insect box. The work consists of differently sized and colored paper butterflies, which Wüthrich cuts from illustrated covers of pocket books and arranges like a lepidopterologist in color and form in an showcase. The “pharmacies littéraires” are made from old pharmacy closets. The bottles labeled with titles of world literacy promise a humorous remedy for medical problems. The “Literary Portraits” are works on paper, which also refer to classics of the world or trivial literature. Peter Wüthrich works here with brushes and color pencil in a free manner. The abstract wall works of the serie “Collection Silva” are more conceptual. The artist realizes almost monochrome works, which recall the tradition of concrete art and Minimal Art.

For his works, Peter Wüthrich has been using books since the beginning of the 1990s. He arranges them into installations or transforms them into objects. All components of the medium are used: book cover, title page, bay titles and pages and bookmarks. The book is both an information carrier and a physical object for the artist. Peter Wüthrich plays with the many facets of the book and lends him a poetic and humorous note.