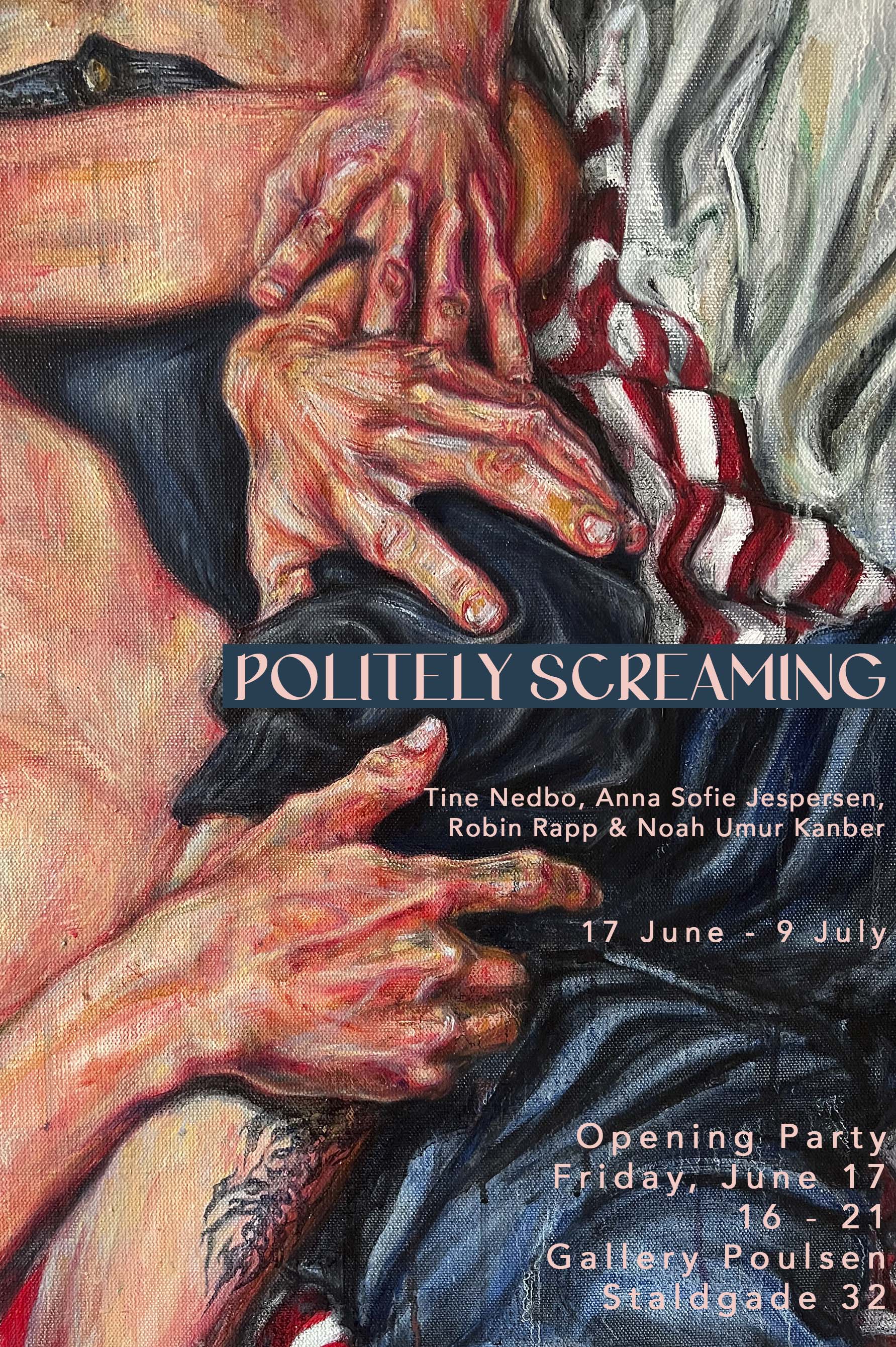 In our upcoming exhibition Politely Screaming we have collaborated with our local artist Tine Nedbo to invite three artists, Anna Sofie Jespersen (DK), Noah Umur Kanber (DK), and Robin Rapp (DE), who all present works that confront the alienation that one is exposed to when belonging to a different sexuality, skin color, gender, or heritage in often very homogeneous western societies, but to an even greater extend focuses on the beauty and tranquility that emerges with the discovery and acceptance of ones own identity. Politely Screaming exemplifies how the sculpture and the figurative painting play a significant role in the contemporary conversation about gender and identity in our heteronormative society.

Tine Nedbo’s work often deals with the idea of the home: a well-known and protective holster, a metaphysical architecture designed to protect the often othered bodies, minds, and relations depicted. What we sense outside the frame is the intrusive and potentially threatening established societal order. We sense its intrusion in the alert gazes and protective embraces of the figures, contrasting within their relaxed and cocooned bodies safety and vigilance, and in the tumbling perspective of the paintings that seem to implicate the viewer in the violence of the status quo. The accessibility granted to whoever is gazing into these private spaces is not unconditional.

The sensitivity radiating from Nedbo’s paintings is also present in the exhibition’s new works by Noah Umur Kanber where religious references and Turkish culture are combined with childhood fantasies and notions of affiliations in large glass sculptures composed of objects that are now given a new life. At the same time, the pompous and imposing aesthetic of the sculptures also denotes the globalized world’s excessive consumption.

Umur’s works are heavily influenced by the trauma and happiness of their upbringing, while also drawing inspiration from the sensation of clarity and liberation experienced when you’re able to openly define a personal identity that isn’t a product of a heteronormative society’s cultural, religious or gender-based principles. By focusing on these, very personal, stories the sculptures convey Umur’s inner conflict between two contrasting worlds while also representing how they have maneuvered their way through an existence where both cultures diligently have attempted to win influence. Despite this constant pressure, Umur has been successful in establishing and conveying an identity that isn’t derivative of conventional expectations and comprehension of gender.

In his work with large-scale oil paintings, Robin Rapp is particularly interested in how disturbing factors contribute to the creation of a state of tension, and thus ambiguity, on the canvas. Rapp achieves this effect by composing metaphorical collages where the characters of the works are removed from their usual environments or routines and placed in new contexts where the tenderness and sincerity of the portrayed people are revealed. In the exhibition’s new series of works by Robin Rapp, consisting of five oil paintings on canvas, we are introduced to people, places, and memories that have been significant and influential in Rapp’s life and fantasies. The personal references are arranged in new constellations, conveying an experienced reality that functions as a collection of personal stories, intimacy, and affiliations, all crucial to Rapp’s development and self-understanding.

The manifestation of a perceived reality also plays a significant role in the new works by Anna Sofie Jespersen. Jespersen’s disturbing paintings present visceral and auto-fictional scenes in which friends, family, and icons alike unwillingly make up the cast in the fantasies and stories that are unfolding on the canvas in front of us. In an attempt to be in close proximity to these portrayed fantasies, Anna Sofie Jespersen often makes a cameo in the scenes she is presenting to the viewer. The desire for proximity to the fantasy reveals a certain perverseness that utilizes the self as a vehicle of desire, revelatory of Jespersen’s own fascination with the spectacle of horror and pornography. This type of study weaves in and out of the real and the imagined narrative and thus achieves an expression that is far closer to a personal, perceived reality than one could achieve by relying only on indisputable facts. By applying these modes of expression, Jespersen’s surreal renderings of reality convey how she personally experienced and remembers certain occurrences and interactions, instead of presenting a universal truth. With this use of the painting, an expression of personal desires and beliefs will happen completely unconsciously, which in return ensures that the finished work is as free from societal norms as possible.

Together the four artists create an intimate, thought-provoking, and stimulating space in our gallery in The Brown Meatpacking District where artworks with different aesthetic expressions are presented. Because of the works’ differences in appearance and method of creation their similarity can be found in the themes they present. Attention to this will reveal a focus on intimacy and otherness in convention-bound societies as the common denominator in the works, embedding the exhibition with indisputable sincerity.

Politely Screaming is a part of our ongoing series of invitational exhibitions wherein one of Gallery Poulsen’s permanent artists acts as an ambassador for the gallery, opening our platform to new expressions, impressions, and perspectives to the benefit of both artist and viewer.

The exhibition opens on Friday, June 17 from 16 – 21 in Gallery Poulsen, Staldgade 32, Copenhagen V.

Awinbeh will DJ at the opening party where there will be served beer, wine, and more.