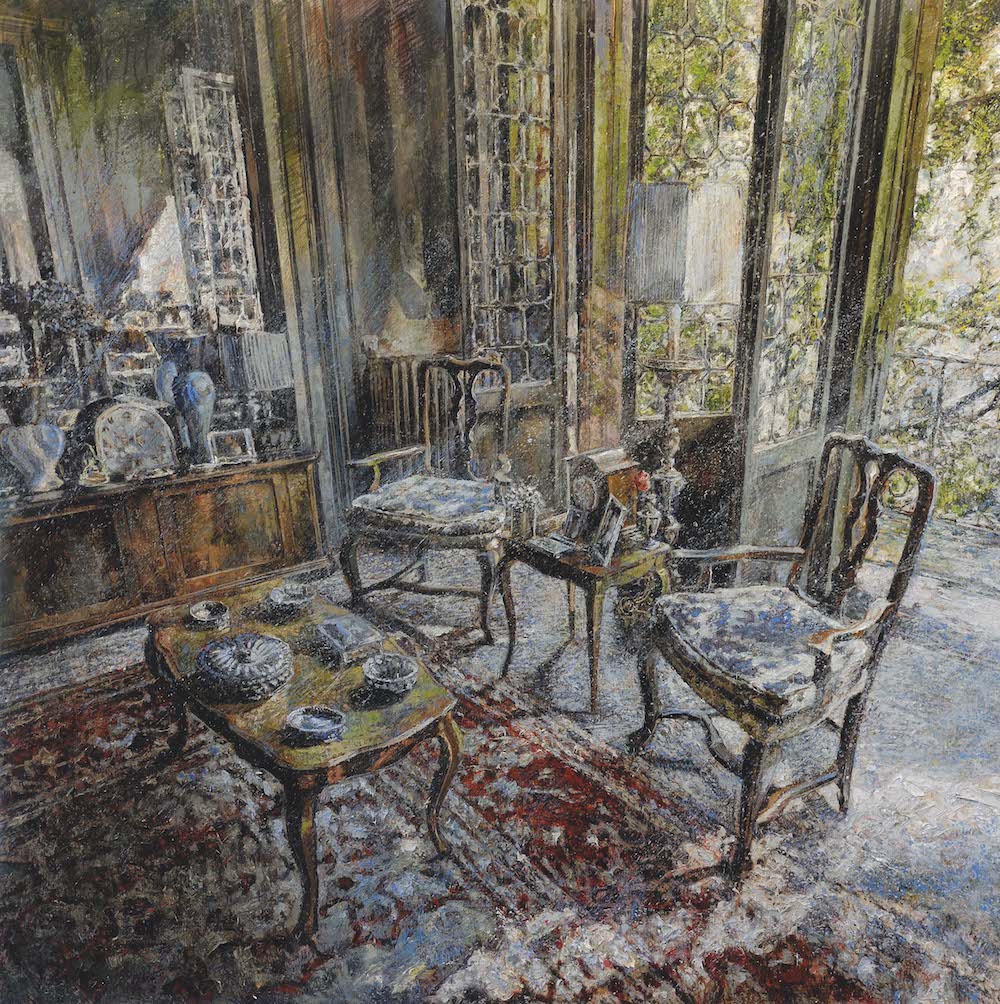 RAFFAELE MINOTTO MEMORIES curated by Alessandra Redaelli  Opening reception:  SEPTEMBER, SATURDAY 28, 2019, from 6 to 9pmDates: October 1 – November 9, 2019Location: PUNTO SULL’ARTE, Viale Sant’Antonio 59/61, Varese, Italy 0332 320990 / info@puntosullarte.it Visiting hours: Tuesday – Saturday: 10am-1pm | 3-7pm.Catalog: Critical text by Alessandra Redaelli With his fine and vibrant painting, RAFFAELE MINOTTO tells substantial stories of memories and suggestions. The OPENING RECEPTION of his new solo show entitled MEMORIES will be held on SATURDAY 28thSEPTEMBER from 6 to 9pm at the PUNTO SULL’ARTE Gallery in Varese. On display will be 15 unpublished paintings made by the artist during 2019. The rooms of a noble palace in the centre of Padua are the starting point for an analysis of reality conducted through the experience of the history of art: from impressionism – which Minotto reworks in a vibrant coat of colour and with a very special capacity to give solid consistency to light – to abstract expressionism, rethought in the final gesture with which the artist throws limpid colour on the canvas precisely to obtain the effects of fragmented light. Supported by the framework of the finest charcoal drawing – which here and there is revealed in the painting in points where the colour is rarefied – the artist’s work always shows the figure absent but constantly suggested, evoked. His now deserted rooms and laid tables suggest stories, unleashing them in the viewer, carry stories and characters within them. Alongside the interiors, the artist also presents a series of winter landscapes in the show. There the mantle of snow upsets perspectives and proportions, and while the barren land peeps out under the semi-melted blanket, the brushstroke gradually becomes freer and more material, giving these works a strongly abstract connotation.The exhibition is accompanied by a BILINGUAL CATALOG created by PUNTO SULL’ARTE containing curator Alessandra Redaelli’s critical text, and reproductions of the exhibited works. The artist will be present for the occasion of the Opening reception on Saturday September 28th. RAFFAELE MINOTTO was born in Padua in 1969. He attends the Academy of Fine Arts, in the painting stream, in Venice where he graduates in 1991. Alongside painting he studies engraving, dedicating himself above all to the techniques of etching and drypoint. In 1995 he exhibits his painting in his first solo show, at the Centre for the History of Costume Ieri Attualitàin Padua, and from that moment he begins to continuously exhibit his works. The intense work undertaken in the following years is well documented in the exhibition Via Euganea, realised in Padua in 2003, and curated by Giorgio Segato. In 2009 Minotto’s painting was selected for Contemplazioni: a large scale exposition curated by Alberto Agazzani, who put forward an effective viewpoint on Italian painting in Rimini’s Sismondo Castle. From this collaboration come the exhibition and the catalogue Riflessioni, with an analysis of the works created between 2011 and 2012. In 2011 he is invited by Vittorio Sgarbi to exhibit at the 54th Venice Biennale – Veneto Region Section and the following year he participates in the exhibition Incontri all’inizio del mondo, at the San Gaetano Cultural Centre in Padua. At the end of 2012 the exhibition Riflessioni is also moved to the Nino Sindoni Gallery in Asiago (Vicenza) and, successively, presented in the magazine AREAARTE (n. 14/Summer 2013). Acque misterioseis the project that represents a “return to drawing”, also in large format, through the analysis of the theme of the bathers, already tackled for some time through other techniques. The collaboration with Stefano Annibaletto, curator of the project, brings the organization in 2013 of the homonymous exhibition at the Sala della Gran Guardia in Padua and a catalogue which documents and analyses the offered theme. His study of engraving continues alongside his pictorial activity: in June 2012 Grafica d’arte dedicates a wide reaching presentation, endorsed by Professor Paolo Bellini, to his engravings. One of his prints was nominated for the Leonardo Sciascia Prize 2015-16 and presented in the Prize’s travelling exhibitions in the cities of Palermo, Florence, Fabriano and Milan.  In 2017, TG5 Arti-Impressioni on canvas, a Channel 5 feature curated by Guido del Turco and reserved for the art world, presents the public with a selection of Minotto’s works, giving them a brief interview. His work is mentioned in the volumes La pittura nel Veneto – Il Novecento (Mondadori Electa, 2006) and La Pittura nel Veneto – Dizionario degli Artisti(Mondadori Electa, 2009).Over the course of his artistic career he has exhibited in numerous solo shows and collective exhibitions and has exhibited in sector fairs in Italy, Germany, France, the United States, Russia, Austria, Luxembourg and Switzerland. He lives and works in Padua.