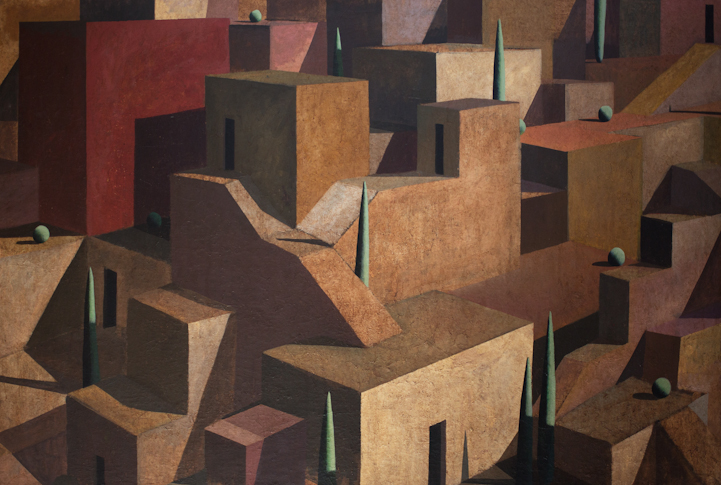 Ramón Enrich is known for his exquisite urban landscapes rendered with an oblique light, clear and intense, that gives strong relief to the architectural elements that are the basis of his compositions. Referred to by the artist as "the crossing of Versailles with your everyday vegetable garden," the paintings of Ramón Enrich evoke images that recall piazzas of antiquity or greco-egyptian agoras with the serenity of Pompeiian frescoes. Their strong sense of perspective, rich chromatic register and an ironic use of industrial and rural architectural structures in an endless landscape devoid of any figures, present the viewer with a stage set for a play yet to be realized. As Luis Eduardo Aute remarked in his catalogue essay for the artist, "They are habitats that never were or ever will be inhabited."

These are habitats that appear is discreet, individual sculptures, totemic icons of architecture that the artist photographs with the serene objectivity of Morandi. In addition to his paintings, sculpture and photographs, Enrich has developed a body of work based on typographic elements, which, arranged randomly on the canvas or paper, involve the viewer to enter into a personal reading of their ontological meanings.

Ramon Enrich was born in Igualada in 1968 and studied Fine Arts, History and Graphic Arts in Barcelona. In the late 80s Enrich received various grants to exhibit abroad. This resulted in long periods at the Mousonturm Cultural Center in Frankfurt and in Berlin. A great admirer of the American artist Donald Judd, in 1998 he moved to Marfa, Texas, where Judd lived. There he developed different works to exhibit at Donald Judd's Chinati Foundation in Texas. He also traveled to Los Angeles, where he met the artist Edward Ruscha and worked with David Hockney. He later lived in New York where he worked as an assistant in the studio of Julian Schnabel.