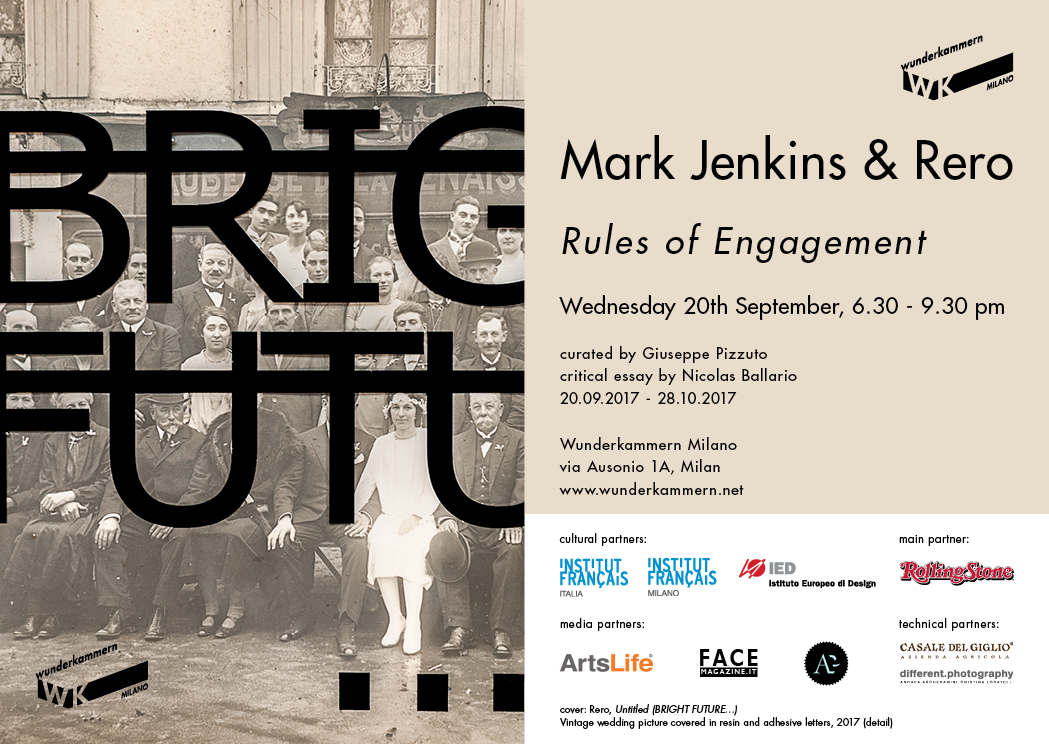 location: Via Ausonio 1A, Milan

Wunderkammern starts the new artistic season in its Milan venue with the show Rules of engagement by artists Mark Jenkins and Rero.

Mark Jenkins (USA, 1970) is famous for his hyperrealistic sculptures of persons, animals and objects placed in the urban space. Since the moment they are “delivered” to the street, the works start the short life-cycle which will bring them to deterioration or disappearance. The sculptures take on positions or create situations which are emblematic and surreal, transforming the public space and pushing the passers-by to become real actors, part of the artwork itself. Beyond all the reactions that can be triggered by the installations, such as fear, indifference, confusion or amusement, Mark Jenkins’ art offers an unusual occasion of reflection on social and political themes, as well as on ourselves and our behaviour within society. His work has been exhibited from New York to Barcelona, from Tokyo to Moscow; the artist has collaborated with Greenpeace in 2008 and has participated to important events such as the Nuit Blanche of Paris and the Glastonbury Festival, both in 2014.

Rero’s (France, 1983) work is placed in between urban art and conceptual art, and it is based on language. Influenced by sociology and philosophy, the artist reveals his message through sentences or words which are crossed by a thick black line. The line indeed defines Rero’s research on the negation of the image and on self-censorship; it acts as a contradiction and it multiplies the possible interpretations of the message by the observer. His site specific interventions, whether created in urban abandoned spaces or in natural and wild landscapes, imply a strong interaction with their context. His fine art works explore the concept of re-appropriation through the use of materials, supports and objects originally intended for something else. Rero has exhibited in important galleries and institutions, among which the Vasarely Foundation (Aix-en-Provence, 2014), the Centre Pompidou (Paris, 2013), the Grand Palais (Paris, 2013) and the La Poste’s Museum (Paris, 2012).Mark Jenkins and Rero are back to Wunderkammern some years after their solo shows in Rome, respectively Living Layers and Supervised Independence.

In Milan, the two artists present the evolution of their artistic research in relation to the concept: Rules of Engagement. The rules of engagement are regulations or directives issued by a military authority specifying the circumstances, conditions and limitations under which forces can engage in combat with the enemy. Simultaneously, engagement is also the formal agreement to get married. It is a word that brings together the extremes of emotions, hate and love. On the one side, it is a process that legitimises and authorises violence and the act of killing. And on the other side, an existing relationship based on the purest of feelings is validated and made official by engagement. Building on these concepts, the artists explore the mechanisms of the formalisation of emotions in our contemporary culture. For the show a series of mixed media artworks will be exhibited, as well as some four-handed installations developed jointly by the two artists.