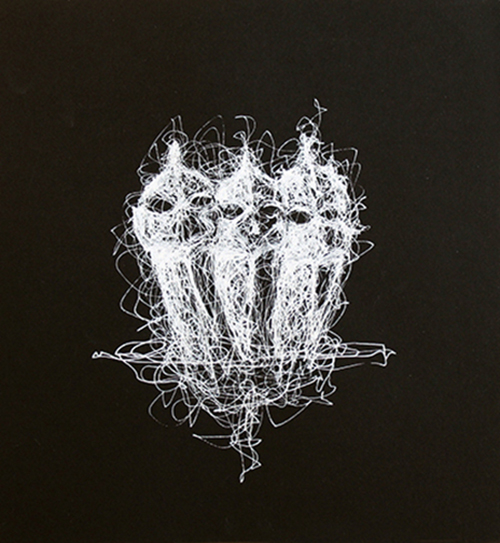 Works by the young Bosnian architect Dario Krljes can be seen for the first time in the fourth exhibition series of Salon Real/Virtual in Michaela Stock Gallery. “Mroneline” is, on the one hand, the name of the artistic figure that the architect has created as an alter ego and, on the other hand, it defines his artistic style. The artistic figure “Mroneline” is inspired by the famous oneline drawings of Pablo Picasso.

Mroneline’s simple minimalist black and white drawing style is not new. The simplicity of the one-line drawing unmistakably reflects the spirit of classical modernist architecture à la Mies van der Rohe »Less is more« as well as his longing for the simplicity of form and function.

Responding to the gallery concept SALON REAL / VIRTUAL, the exhibition DNA of Architecture in Salon Real will showcase digitally created portrait drawings of famous architects in order to emphasize two often diametrically opposed positions real vs. virtual. Hand-made drawings of architectural buildings and design pieces by these architects are juxtaposed in the virtual gallery. Since the real gallery will be closed until February 7th, the digital portraits will be presented in a second room of the virtual gallery.

Mroneline’s drawings in the current exhibition appear as an artistic response to social, political developments and changes, which in certain times are also reflected architecturally. Cityscapes are shaped by their unique buildings, architects and designers. They accompany architect Dario Krljes on his life’s journey from his early childhood in former socialist Yugoslavia, through his school years in Spain, to his architectural studies in Vienna.

Accordingly, in his graphic oeuvre one finds gigantic and emotional monuments of the Yugoslavian architectural scene, which were forgotten after the disintegration of the federal state. For example, Bogdan Bogdanovic, a Serbian architect who lived in exile in Vienna since the 1990s, created the Dudik Memorial Park in Vukovar for the victims of fascism. Another example of the unique architectural style of socialist modernism in the former Yugoslavia is the National Library of Kosovo in Pristina, designed by Croatian architect Andrija Mutnjakovic.

Mronline’s drawings Fuente de la Salamandra and the chimneys of Casa Milá, which look like warriors, were inspired by the architect Antonio Gaudi. Namely, the artist was largely influenced by Gaudi’s architecture while growing up in Barcelona. The Barcelona Pavilion is considered one of Mies van der Rohe’s major works. George Kolbe’s sculpture “Dawn” plays an important role as an integral part of the architecture but very little attention has been paid to it so far. That is why Kolber’s sculpture is presented and not the pavilion. Its importance for the spatial structure – the “flowing space” – has mostly been overlooked.

Mroneline uses various architectural motifs to tell his personal story at the intersection of architecture and design. One of the motifs is dedicated to female architects such as Eileen Gray, Zaha Hadid and Ray Eames. Special interest has been given to the Irish designer and architect Eileen Gray. The Villa E.1027 on the Cote d’Azur is her most famous building and it led to controversies with Le Corbusier. E.1027 is the only classical modernism house that was planned and built by a woman alone. Her monochrome carpet design St Tropez, with geometric design elements, will be shown in the exhibition as a tribute to the artist.