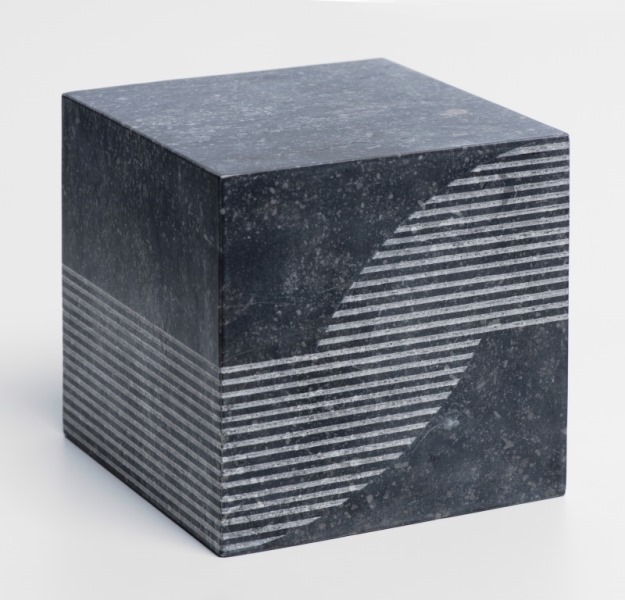 From childhood Elise Delbrassinne was fascinated by Eastern philosophy on which meditation brings us to greater self-knowledge. She is also fascinated by the past. Elise
envies ancient stones who as shelter and housing are telling the story of this past, the original chaos. Therefore stone and especially the bluestone, also called "petit granit " forms the basis for the sculptures of Elise. It is a limestone that emerged on the seabed by the prolonged compression of fossil, remains of shells and small stones. It contains very valuable heritage. Elise wants to add her own story to this.
Elise Delbrassinne belongs to the school of constructivists. She was good friends with Jo De-lahaut. For her the square the ideal space, clearly delineated and balanced, not like the circle in which you get lost. She is also fascinated by the honesty of pure straight line. Without re-ferring to the physical reality the square represents the essential and the infinite.
Elise engraves its parallel lines, but never deep, to save the stone. The choice of engraving corresponds to the search of a controlled shape and meets the requirement for accuracy and thoughtfulness. By gently polishing with sand paper she accentuates the color contrasts.

Elise Delbrassinne also works on paper: aquatints. The stonemason and etcher have a lot in common, it's about texture and delicate shades. The erosion of the stone and the bite of the acid on the metal plate follow the same laws.
Looking at Elise’s work makes you fall silent, so as to penetrate to the deeper meaning of what you see.