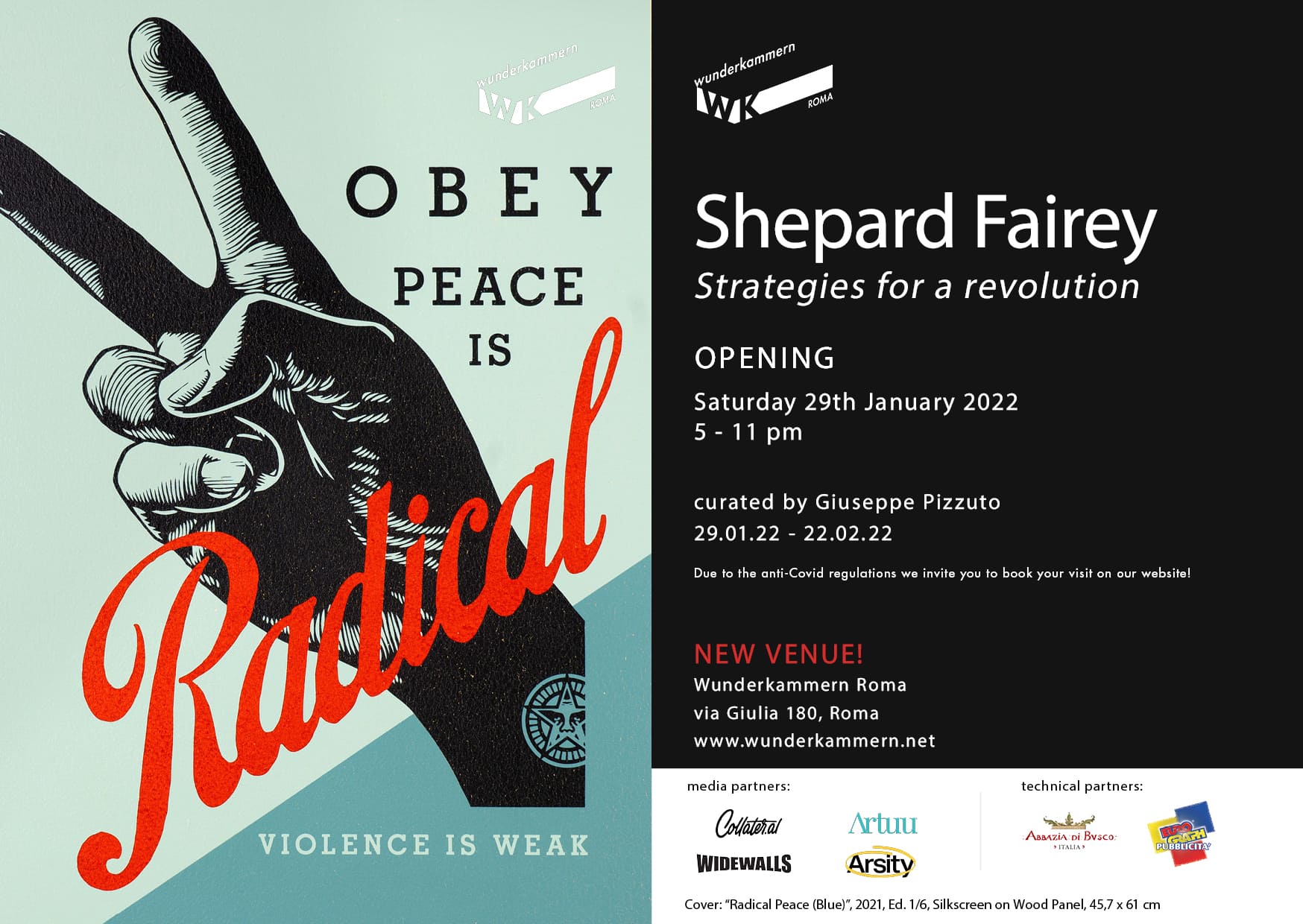 Urban art gallery Wunderkammern announces the opening of a new venue in the heart of the city’s historic centre, featuring Shepard Fairey’s exhibition Strategies for a revolution.

Wunderkammern inaugurates its new venue with Shepard Fairey, one of the key artists in the history of Street Art, whose art has shown the evolution of a movement and its languages: from stickers to creating posters that cover city walls.

Fairey (b. 1970, South Carolina), known for his HOPE poster of Obama’s presidential campaign, is the artist also known as OBEY GIANT, named after the 1989 “André the Giant has a Posse” sticker campaign, carried out when he was only a university student. After the solo exhibitions Force Majeure at MMOMA (Moscow, 2018) and 3 Decades of Dissent at the Galleria d’Arte Moderna (Rome, 2020), Shepard Fairey returns to Italy with the solo show Strategies for a revolution, which includes a series of unseen works, personally selected by him, capable of touching on the most important themes of his incredible career between underground culture and political activism, once again inviting the viewer to question and reflect on the system of contemporary society.

With his exhibition “Strategies for a revolution” Shepard aims to overwhelm the viewer with his imagery and his ironic, propagandistic, iconic language. (…) The energy released by the images created by Shepard, no matter how many times we have the impression that we have “seen them before”, is always surprising. – G. Pizzuto

The artworks in the exhibition all revolve around one of the great themes of Shepard Fairey’s poetics- power – represented in all its facets and meanings, both as a form of political tyranny and as a drive capable of freeing the masses from their oppressors.With his unmistakable style, inspired by Futurism and Russian Constructivism, he goes through the graphic tradition of European dissident and avant-garde art. Shepard Fairey’s artistic versatility, however, is not only limited to taking up models from the past, but also to using materials and techniques that are always different and unique; the exhibition, in fact, presents a selection of works made using techniques such as collage, silk-screen prints on different supports such as wood or aluminium, HPMs on paper and even vinyl covers. Wunderkammern gallery is pleased to invite you to the opening of the exhibition on 29 January from 5 pm to 11 pm in Via Giulia 180, Rome. The way of participation will be influenced by the pandemic situation, we invite you to consult our website www.wunderkammern.net, where we will provide all the indications.

Opening hours: from Tuesday to Saturday10am – 2 pm; 3pm – 7pmBook your visit on our website!