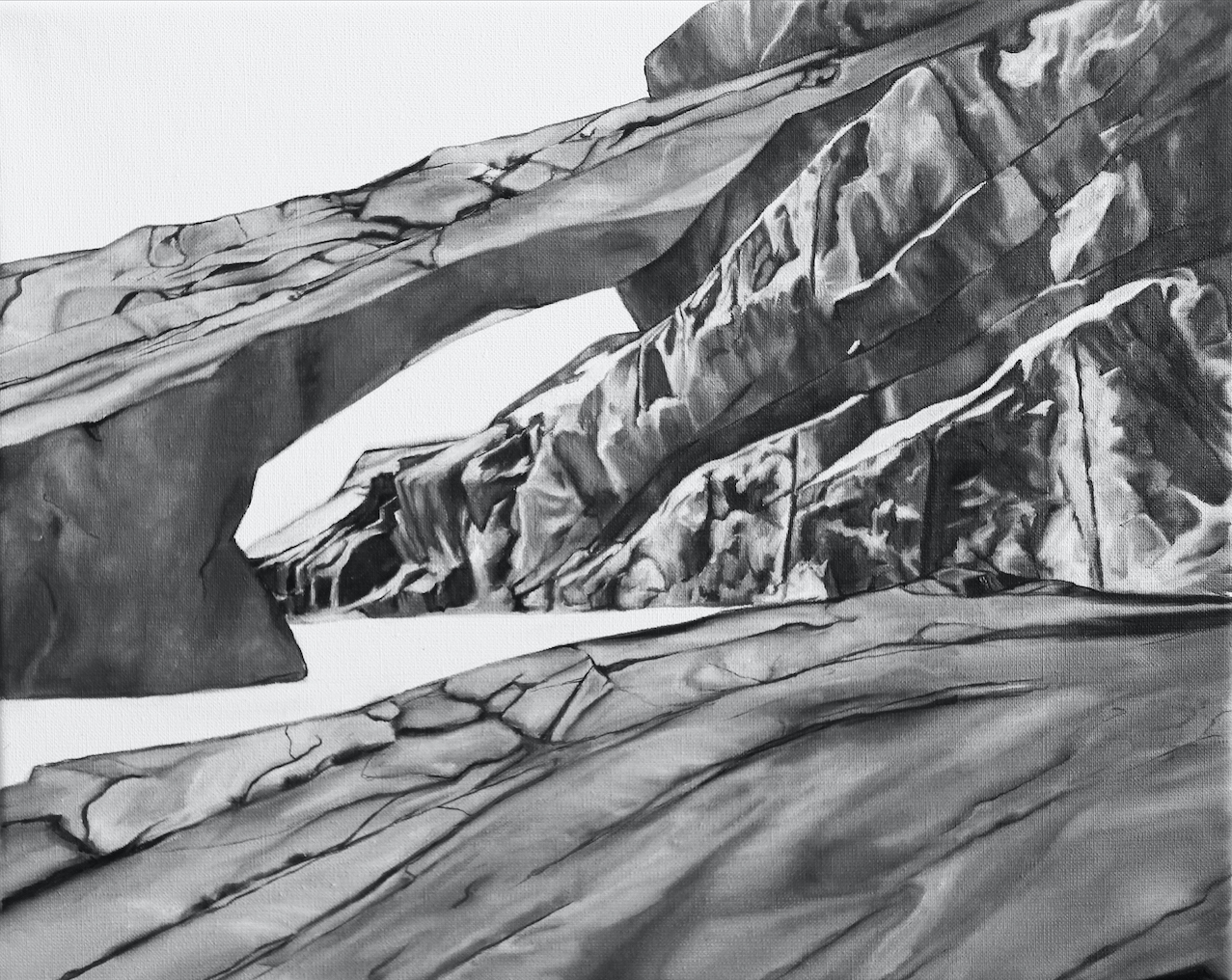 In the paintings and collages of Sibel Kocakaya (*1986 in Istanbul, lives in Bern, works in Zurich) and in the objects of Bendicht Gertsch (*1968 in Bern, lives and works in Bern) linear structures and intermediate forms are of fundamental importance. From the “linear intervals”, the lines and interstices, which both artists variously joins together or work out of the material, the characteristic plasticity and spatiality of their works emerge: from forms of branches or rocky, mountainous structures, or from architecture and the physical, being-like. As much as the paintings and collages and the objects in the exhibition each stand on their own and want to be “discovered” individually, it is precisely in the spaces in between that they may enter into an exciting dialogue with each other.

For her paintings and collages, Sibel Kocakaya always uses photographs as a starting point, which she takes during observations on walks in her surroundings. The different motifs and templates, usually there are several for a work, stem on the one hand from her places of residence, which have already led her from Istanbul to Paris, Lyon and Zurich to Bern. On the other hand, from travels, e.g. on Ibiza, where she discovered a strange flotsam on a remote coast (Untitled, 2021), or in the Swiss mountains, of which pictures such as Untitled (Rocky mountain from Ticino, 2018) and Untitled (A view from Sustenpass, 2020) tell. As naturalistic and tangibly real as the rock structures seem, they are idiosyncratic, painterly realizations of the artist. Here, too, she sometimes combined several models, as in Untitled (Nufenen and Grimsel Pass, 2020). Painting reduced to black and white and shades of gray may be a unifying element of Sibel Kocakaya’s exhibited works. In this respect, they resemble historical photographs that reproduce a specific situation or event in the past. At the same time, the artist attempts to achieve a comparable effect and intensity with achromatic colors, as it is usually achieved in painting with chromatic colors, with the coloration.

Sibel Kocakaya is also interested in architecture as a cultural asset and as a phenomenon that constantly surrounds us. In this respect, the environmental conditions of a place and its people with their habits and peculiarities also play an important role. In her paintings and collages – sometimes the techniques are combined with each other ­– the artist creates novel, often unreal pictorial worlds with multidimensional spatial alignments; for example, through connections of ancient and modern architecture (Untitled,2021; ‹Blue Column›, 2021; ‹Aventicum›, 2021). But even a plain room, as in ‹Interspace› (2018), seems unreal because of the doubling of the window front and the foot and ceiling planks. In the paintings with figures – as a template always serve self-portraits of the artist – the specific observations and incidents as well as the ambivalent spatiality are also central (‹Threshold space›, 2021; ‹Sphere›, 2000; Untitled [Solstice], 2016; Untitled, 2018).

The spectrum of works by Bendicht Gertsch in the exhibition provides an overview of his work over about the past twenty years. Both for the earlier sculpture made from a yew tree trunk (‹Geflecht›, 2000) and for the more recent cast sculptures layered and joined from pressed wood and plywood, the artist was inspired by phenomena of nature, geometry and architecture as well as organic forms. In his work, however, he does not start from illustrations or sketches, but from internalized ideas and images. Through considerations and studies of form and during the realization itself, the objects finally take on their actual shape. Sometimes they are based on basic forms such as circles or twisting, windingconstructions derived from them (o.T., 2007; ‹White Lines›, 2020); sometimes on natural motifs such as mountains (‹Eiger›, 2007; ‹Mountain› und ‹Red Mountain›, both 2011), braids (‹Geflecht›, 2000; ‹Turm XVI [Geäst]›, 2010) or on a seed, an opening flower (‹Oeffnung›, 2021). Equally important for the works is the architecturally built or naturally grown tower form, exemplified for instance in ‹Würfelturm› (2019). Finally, the artist is always concerned with expressing the essence, the own character, of an underlying form.

A large part of Bendicht Gertsch’s works are layered cast sculptures, for which he assembles ­– layer by layer – precisely sawn pressed wood panels into complex objects. The plates follow one another in a staircase-like gradation, sometimes twisting upwards in multiple turns. In addition to compact bodies, there are also constructions with an inner and outer form. Here the interior is sometimes colored black, which gives the spatial-plastic effect an additional dimension. Finally, the works take on different forms depending on the point of view, their interior and exterior, their plasticity and spatiality constantly change, and thus unfold their actual complexity.