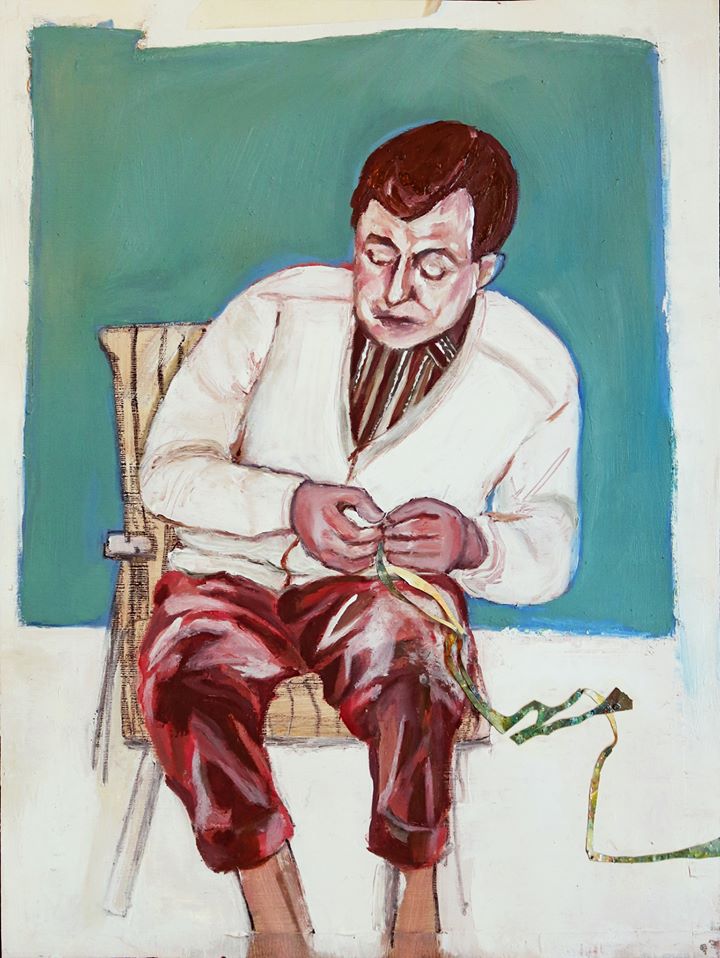 A link will be available from https://www.oliviercornetgallery.com/exhibitions earlier on that day.

From 6:30pm onwards on that day, the artist and the gallerist will also be live online on the gallery’s facebook page to chat about the show and answer online comments. Our Facebook page is: https://www.facebook.com/oliviercornet.gallery/

As the gallery reopens its doors -albeit by appointment only- from June 8, visitors will be given the chance to see the show ‘in the flesh’ from June 8 to June 12.

Susanne Wawra visually tackles the German concept of Sitzfleisch, one of these compound words that express a certain quality that can’t quite be grasped in the English language. Literally translated, sitzfleisch means ‘sitting flesh’ or ‘sitting meat’, a term for one’s behind or bottom. In its use, to have sitzfleisch means the ability to sit still for long periods of time to be productive, a certain stamina at work and in life working through a situation or bringing a project to an end.

Wawra’s works are a play on endurance, staying power as well as sitting and flesh; with an autobiographical and associative approach. This is translated into different forms of expression: her characteristic layered mixed media pieces as well as drawings, oil painting, ceramics and sculpture.

Note from the gallery: In the current context, this assemble of works seems to acquire a new dimension, and yet the idea of the show, its title and accompanying text were all elaborated by November 2019.

Susanne Wawra (b. 1980, Germany) lives and works in Dublin, Ireland. Susanne completed a Master’s Degree in English and Communication & Media at the University of Leipzig, Germany and moved to Dublin to work for an International big player in 2007.

Wawra graduated in Fine Art Painting at the National College of Art and Design in Dublin and won the Talbot Gallery and Studios Most Promising Graduate Award 2016. Further, she received a Highly Commended in the global Undergraduate Awards (2016) and has been listed as one of the four artists in the Visual Arts Category of ’50 People to Watch in 2017′ in The Irish Times.

Wawra is a member of our AGA group.

About the AGA group:

In addition to the group of artists we represent, the Olivier Cornet Gallery also works with another group of artists, usually artists Olivier has met and engaged with at the Speed Curating Event, organised by Visual Artists Ireland (VAI) as part of their annual GetTogether day.

This group of artists are recent graduates, artists at the start of their career, or emerging or established artists we work with for special projects. Other galleries tend to refer to these artists as ‘project’ artists. At the Olivier Cornet Gallery, they are members of the ‘AGA group’ or ‘Associate Gallery Artists’.