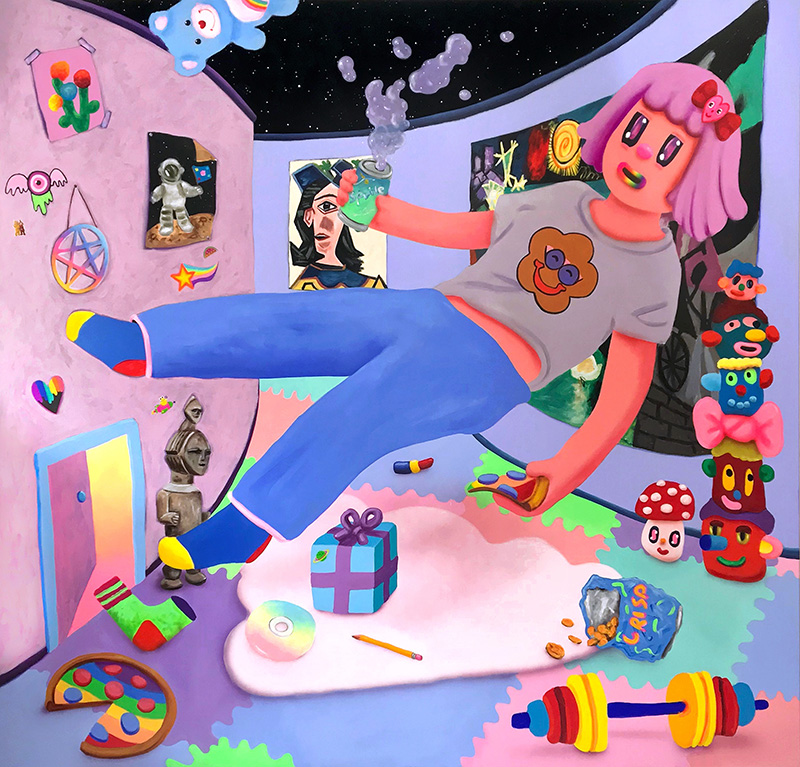 On October 26th internationally acclaimed artist Super Future Kid will open her first solo show in Denmark! We are so lucky to have her and her trippy art at Gallery Poulsen, Copenhagen this fall. Super Future Kid’s art is true art candy and has been featured in well-known magazines like i-D Magazine, Juxtapoz and LARMAGAZINE to name a few.

Super Future Kid’s solo show happens to coincide with the 30-year celebration of the fall of the Berlin Wall. A historic moment in time that has been defining for the development of her expressive style, as she grew up in the Eastern Bloc without the fancy, flashy world of toys and cartoons that children had access to in West Germany.

After the fall of the Berlin Wall life for Super Future Kid changed dramatically. Her reality expanded with the sudden emergence of Western popular culture, especially through video games, brightly colored toys, TV commercials and junk food, all of which transformed the world as she knew it completely. It was like a dream for her as an 8-year old kid and as her artistic work reflects, her obsessive fascination with toys, cartoons and colors never changed. Super Future Kid explains that this fascination is a driving force in her work, as it motivates her curiosity and desire to create and to play with thoughts about identity and what it means to be human.

The show “SMELLS LIKE TEENAGE ARMPIT” will include paintings and sculptures and transform the gallery into a playful Gesamtkunstwerk that radiates youth and dreaming.

The artist on the exhibition:

“Imagine having a dream and in that dream, you find something. It’s a special object or thing, and you like it so much that you want to keep it and take it with you into the real world. So, you hold it tightly in your dream hands to make sure it’s still there once the dream ends, but the moment you wake up it’s gone. I used to have those dreams when I was little. I was so sure it was only a matter of technique to get a dream thing to become a real thing but of course it never worked out. Recently I have begun to remember those dreams and the desire and inevitable disappointment that came with failing at this impossible task.

I find that a painting is in many ways very similar to a dream. The canvas reflects snapshots or still images of the brain playing its games, imagining things that might seem real but are instead a fantasy world, sealed up through layers of paint. You can look at it, but you cannot touch or take anything from it, because it’s impossible to enter the pictorial plane.

The work that I made for this show is my way of reimagining those moments of wanting to materialize a dream thing from its existence as a mental image into a physical object, that I can hold in my hands.

All the paintings in this show started out as ideas I had just before falling asleep in my bed. I like to keep my iPad as a sketch book right next to me. As soon as I go to bed my mind lights up and wants to start drawing, so I often draw or paint on it until my eyelids fall down. The moment I close my eyes my head continues producing images and creates dreams that almost feel like living a second life, until I wake up again to find myself back in the real world.

In a way I feel that these paintings are like semi dreams as they come into existence right on the border of being awake and asleep. This time however I decided to allow the things that exist within that sealed up fantasy world to get an appearance as actual objects outside of their unreachable dimensions, like souvenirs from the other side.” – Super Future Kid.

Super Future Kid was born in East Germany in 1981 and spent the first 8 years of her life completely unaware of the western world. The cultural shock that followed the fall of the Berlin Wall left a great impression on her and plays an important role in her love for bold colors, toys and everything joyful and playful.Super Future Kid’s work is largely based on themes that strongly relate to certain ideas of childhood and youth; a time that still has a great influence on her personality and artistic identity. She’s deeply fascinated with the perception and perspective on the world from the view of an adolescent mind, and particularly in ideas of the mysteries and strangeness associated with being grown up. Those ideas include the realms of character identity, curious behavior and spirituality as well as games and playfulness, and lastly the idea of the freedom of the youthful spirit itself.

The artist will be present at the opening and available for interviews.

Contact the gallery at info@gallerypoulsen.com or phone + 45 33 33 93 96 for further information.