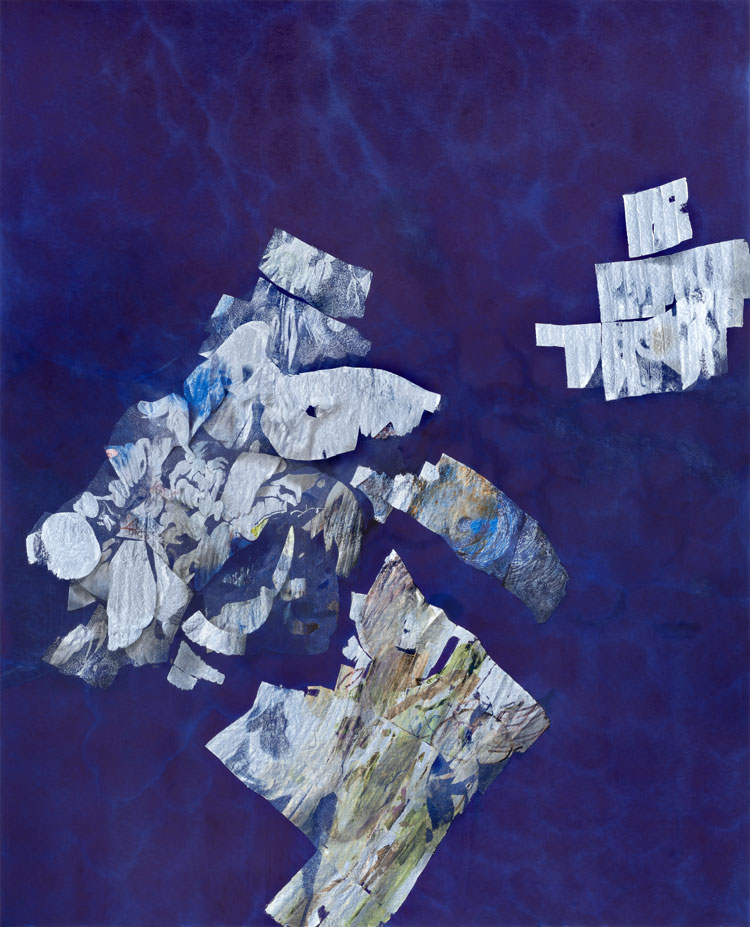 Stefan Guggisberg (*1980 in Thun, Switzerland) produces images filled with objects: stones, water, vessels, humans, storms, whirls, eddies, explosions and fog. These figurative elements have not been transferred onto paper from observation or imagination, but rather extracted from abstract accumulations of oil paint.

In the successive phases of this production process it is possible to see analogies to the way physical reality generally is built up. In Kollision, paint applied with a palette knife generated marble-like veins. The surface was then worked on with an erasing machine, exposing the white paper in a point structure to bring about the coarse, grainy optical and tactile properties of raw stone, serving as a kind of prima materia or at least working material. The irregularities arising from the series of erasures come to dictate the spatial extension of the stone, which is further brought out by further removal and application of paint, resulting in rhythmical series of edges, fissures, bulges and whirls, as well as modulations of light and shadow. The “collision” referred to in the title is the incursion into this geological space of an event from another space, a blue crystalline explosion, centring on a section of opaque paint in hard-edged relief on the paper like a mosaic stone. This lapis lazuli from one of those parallel universes is seen by SG as belonging to geometry, an elemental Platonic form like those in the Timaeus, presumably an icosahedron. It is in process of coming into being or disappearing, or emerges only partially into visibility, like an incomplete video image, surrounded by larger circles or spheres in reddish ochre constituted of a softer material and radiating as splinters under the pressure of an explosion from out of the icosahedron, sprinkling over the stone underneath or grown into it. The miniature icosahedron event – which, by drawing into itself the energy from the whole space, brings André Bretons notion of the explosante-fixe to mind – could be a cosmic, a subatomic or (SGs preferred interpretation) a purely ideational one: forces, effects, principles or even formulae made visible.

This way of working has a tradition. Leonardo da Vinci noted that by looking at an old wall, stones or veined marble attentively you can see an infinite array of objects. Max Ernst took up this suggestion systematically and in numerous variations. When Jean Arp dropped bits of paper and affixed them where they landed, and when John Cage used stellar atlases or the I Ching to produce series of notes, it is also part of this same broad continuum. What seems to be chance is merely a means of capturing and concentrating the real, nature, whose effects are allowed to unfold by obeying the suggestions of an autonomous external process – in the case of Stefan Guggisberg, it is a discipline of attentiveness to the precise shapes of phenomena striving to come out of the wall.
Text: Steven Black