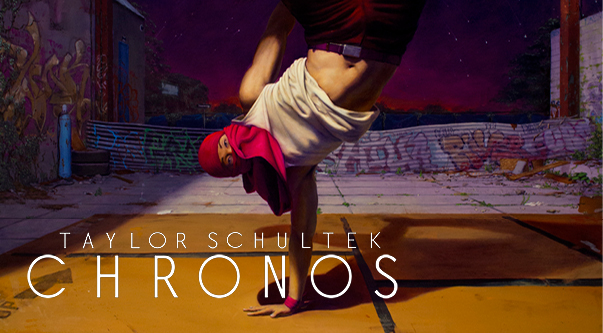 We mark this final part of the year with an tremendously beautiful solo show when we open the doors up to Taylor Schultek’s world of desolate alleys, dilapidated back yards and masked boys, vitally breakdancing across the canvas.

Taylor Schultek has created every single artwork in a hyper complex architectural grid. Piece by piece, as an artistic contractor, he constructs his works in systematic layers, based on classical geometrically designed perspective drawings. From here, his virtual spheres slowly come to light, and with a steady hand and firm eyes, he takes us directly into his philosophical laboratory, where the reflections float freely. His exploratory brush strokes examines the nature of time and human relationship with the spaces in which we move, that whispering call us with enticing rays of powerful neon lights.

The title ”Chronos” is elegantly borrowed from Greek mythology, where Chronos is the personification of time, who carefully watches over the linear chronological timeline. As a nostalgic programmer, the preservation of time is a phenomenon that clearly captures and influences Schultek’s body of work. On canvas, his virtual worlds become the vessels through which runs a sporadic flow of snapshots and events from his own memory. In a visual remix, he creates a coherent reality – an expanded present time built from the crystallized fragments of the past. Walking around in Taylor Schultek’s solo exhibition is like moving around in a snapshot of his memories.

The spaces play a crucial role in the exhibition’s three portraits, where masked figures move in full vigor, but at the same time, are unknowingly locked in a time structure, framed but the subtlety of space. The three figures jointly present Taylor Schultek’s visual interpretation of the English philosopher John Locke’s epistemology of man being born without consciousness, but slowly builds layers upon layers as they experience the world and relate to their surroundings.

In the exhibition’s largest work “B Theory – Superposition” we meet the Eternalist, a figure placed in an infinite space built of past moments. Schultek illustrates the philosophy of an immutable block universe, where experiences in time and space do not cause each other, but rather fit together as a jigsaw puzzle.

The figure with the yellow headscarf is placed in an extremely shallow space, restricting the viewer from observing anything beyond the line of sight. This is the perspective of the present – a figure whose reality exclusively unfolds in this moment. The blue figure is placed somewhere in between, existing like a boat floating down the stream through a determined path of freedom from all restrictions.

Discover the infinite spaces of Taylor Schultek, through gates, stairs and corridors leading us all the way into his ingenious mind, where time stands still.

Taylor Schultek will be present at the opening and available for interviews.