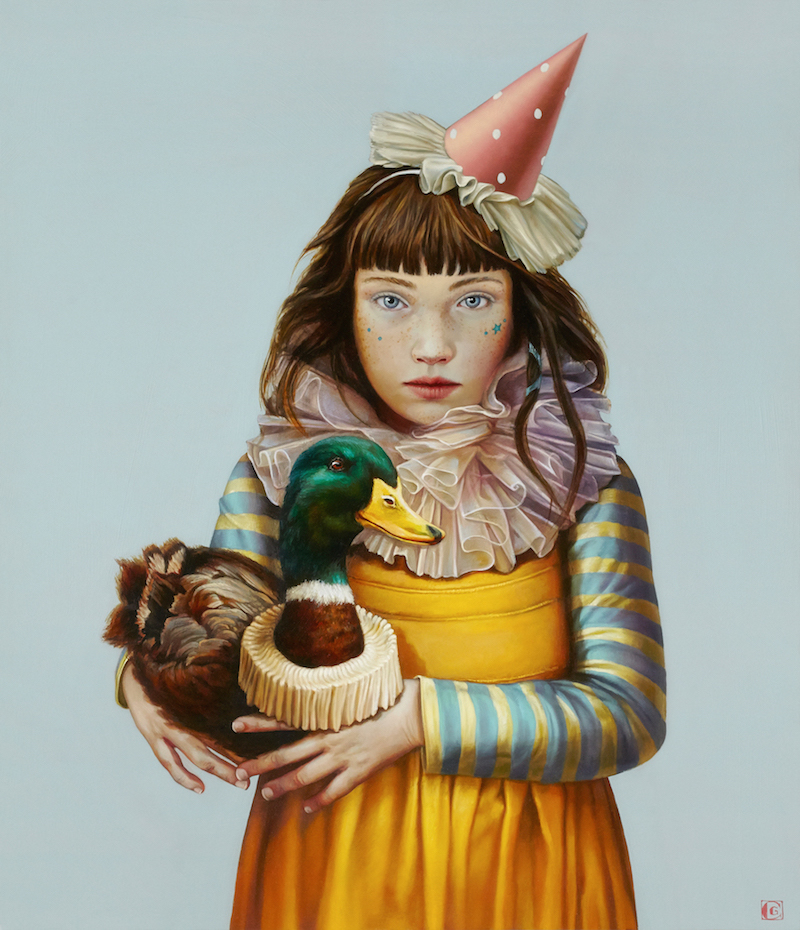 Vernissage: SATURDAY 17th NOVEMBER 2018, from 6 pm to 9 pmDates: 18th November – 29th December 2018Location: PUNTO SULL’ARTE, Viale Sant’Antonio 59/61, Varese + 39 0332 320990 | info@puntosullarte.it Visiting hours: Tuesday – Saturday: h 10 am – 1 pm and 3pm – 7 pm. Sunday h 3 pm – 7 pmHoliday closure from 24thto 26thDecemberCatalogue: with bilingual critical text by Angelo Crespi  The age of innocence is the title of Claudia Giraudo’s new solo show, curated by Angelo Crespi, which opens with the VERNISSAGE SATURDAY 17th NOVEMBER from 6 pm to 9 pm at the Varese Gallery PUNTO SULL’ARTE. The title refers to Joshua Reynolds’ celebrated painting, exhibited at the Tate in London, forefather of the so-called “Fancy Picture”, a genre taken up by many great artists in the 18thcentury, to which it refers, even in the contemporary style, to the work of the Turin artist. Between Alice in Wonderlandand Rilke and Picasso’s Acrobats, Claudia Giraudo undertakes refined pictorial research that is only apparently simple and immediate in its aesthetic references, from 20thcentury surrealism to pop, but that reveals, at a closer look, a series of references and suggestions that generate the restlessness of childhood on the edge of adolescence in the spectator. “Life is elsewhere” Milan Kundera suggests, talking about the lyric age, the one in which we still believe ourselves to be the centre of the world, an age that lasts a glance and then flees, but that Claudia Giraudo in fact manages to stop forever, in all its absolute innocence.The show is accompanied by a bilingual catalogueproduced by PUNTO SULL’ARTE containing Angelo Crespi’s critical text and reproductions of the exhibited works. The artist will be present at the vernissage. CLAUDIA GIRAUDO: was born in Turin in 1974. In 2001 she graduates from the Albertina Academy of Fine Arts of Turin and then undertakes her research path in the area of figurative painting training herself through the study of the Renaissance and Northern European masters. Her technique harks back to the 15thcentury tradition and calls for layers of colour and oil, enhanced by the final glazings that accentuate the depth and intensity of the painted characters. An important part of her production is composed of the series of portraits of children flanked by an animal, the Daimon, an alter ego that accompanies them along the adolescent transition phase in which the first existential inquietudes emerge. Her paintings are loaded with encyclopedic references that span through time and cultures, entering into dreamlike settings. Every single compositional element seems to enjoy the peace given by the slow acceptance of time as a precious gift. She regularly exhibits in art fairs, private galleries and in public institutions. Her works are to be found in permanent collections, and national and international museum purchases, including the Harmony Art Foundation in Mumbai (India), the Biella MACIST Museum, the Eusebio Museum in Alba (CN), the Bossolasco Council Hall (CN) and the Bevagna Civic Museum (PG). She participated in the Venice Biennial,