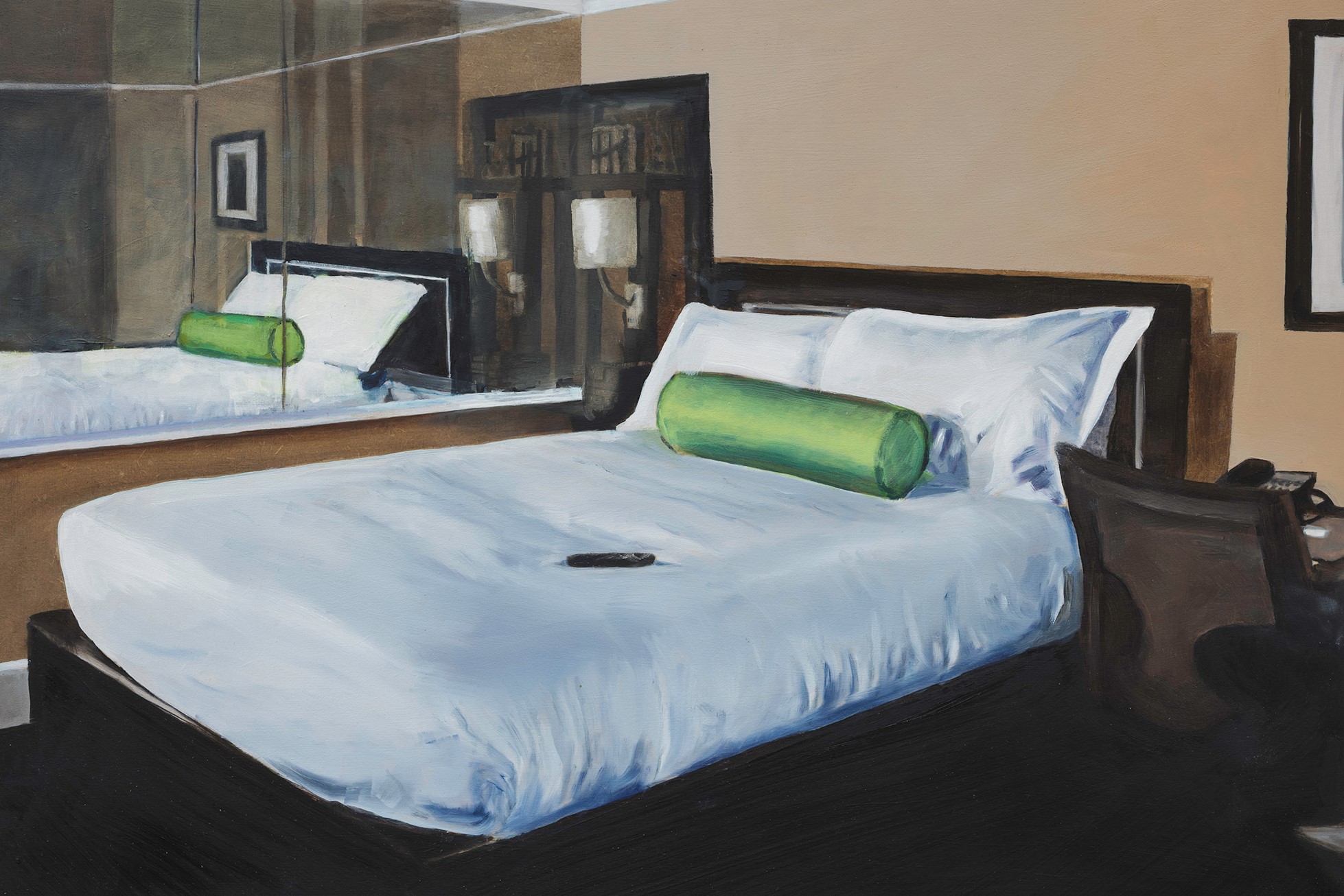 County Laois Arts Officer Muireann Ní Chonaill and Dublin gallerist Olivier Cornet met for the first time at the Speed Curating event arranged annually by Visual Artists Ireland (VAI) as part of their artists’ Get Together at the Irish Museum of Modern Art (IMMA). Through working side-by-side in the chapel at IMMA, meeting artists at this event, the idea for the joint exhibition was born.  From the artists they met last year, Olivier invited David Fox and Vicky Smith and Muireann invited Darina Meagher and Aileen Hamilton to participate in this joint exhibition.

The exhibition will travel at the end of July to the Olivier Cornet Gallery, where it will open on Sunday 6th August, 3pm. The show will run there until 3rd September. Guest Speaker at the opening: Noel Kelly, CEO and Director of Visual Artists Ireland (VAI)

Originally from Tullamore, Co. Offaly and born in 1987, Fox has been painting since a very young age. He graduated from GMIT (Galway), with an Honours degree in Fine Art in 2011 and the University of Ulster, Belfast, with an MFA (Masters in Fine Art) in 2013

Currently, he is both living and working in Belfast, and has a studio residency at Creative Exchange Artist Studios, in East Belfast.

Olivier met the artist at Visual Artists Ireland’s Speed Curating event in Belfast in January 2016. David was then invited to participate in a group show ‘Republic’ in the summer of 2016. Since then the artist has become an AGA member (Associate Gallery Artist ) of the Olivier Cornet Gallery

Aileen Hamilton considers ecological cycles and organic process within her drawings, exploring the delicate balance and repetitive patterns that bind the natural world to form. Isolated landscapes appear suspended or floating in a fragile and exposed state as Aileen explores the physical and mental borders of our world. In doing so, she reveals hidden layers and draws an analogy between the internal terrain of the body and the wider ecosystems in which we live. Landscapes bend as if in a space-time continuum, the exploratory folds evoking the artist’s search for meaning in both micro and macro environments. The interplay between 2D and 3D environments is an integral part of the process in which Aileen moves back and forth between depth and flatness, her drawings growing out of the wall and interacting with the architectural space. In creating these hybrid landscapes, Aileen is drawn to the thin yet fibrous quality of paper, a material both fragile and solid which she progressively allows to find its own form of existence.

“I am currently based between Barcelona and Ireland. Originally from a rural part of County Meath, I am continually inspired by home, my travels and our connection to the land. In my drawings, I investigate themes of dis-location and our relationship with a changing landscape. The interplay between 2D and 3D environments is an integral part of my process where I move back and forth between depth and flatness, with drawings growing out of the wall and interacting with the architectural space.

I studied Fine Art in NCAD and graduated in 2001. Since then I have shown in Ireland, Spain, Japan, Sweden and Thailand and completed residencies in Ireland and Japan.”

Meagher’s work is an on-going investigation through the medium of paint and the simple act of mark-making. She explores new ways of seeing and experiencing the world, always seeking that juncture within artistic process, which allows the infra-thin to occur.

With an Honours B. Des and an MA in Visual Communication, from the National College of Art and Design in Dublin, Meagher spent many years working in the area of design and visual communication. A deep interest in the hand-made has led her to contemporary painting.

Awarded a BA (Hons.) in Visual Arts Practice at the Institute of Art, Design and Technology, Dun Laoghaire in 2011, she completed a Masters in Fine Art Painting at the NCAD, Dublin in 2014. Winner of the Peter O’Kane Solo Exhibition award at the RDS Student Awards 2011, Meagher also completed a three-month studio residency at the RHA, in 2015.

Recently, Meagher was presented with a residency at Arthouse, Stradbally, this was awarded at the Dunamaise Arts Centre Annual Open Submissions Exhibition in November 2016.

Vicky Smith is an award winning visual artist who is a member of Engage Art Studios in Galway. Her practise is rich and a complex language in a variety of mediums-small drawings, paintings, film to installations predominately installation based often composed of paintings, photographs, sculpture, text, found objects and film that explore feminist concepts. The bell jar is motif for the complex installations of enclosures. Performance films and appropriated films are an enjoyment of this enclosure, the isolation bell jar of a female experience. Her artistic concern is female identity within the domestic setting, the social setting and the workplace defined by traditional roles of house wife, work, woman. The work is rooted in being a woman a female artist, what this means, the made boundaries.

‘HouseWork, Woman, Wife’ is a series of photo stills reflecting a suburban housewife’s realisation that maybe all of her life will end up with invisible, repetitive, uncreative housework.

The film on which these photo stills are based is a non-narrative study of domestic labour, work that seems not to be taken seriously by society at all. The whole notion of women being housewives has changed. Do you talk about yourself as a housewife? Most of the change that has happened since the 70’s is a superficial inequality of responsibility. 70% of British and Irish women said they are mostly responsible for housework. Men did housework, he helped her with the housework not the other way round. The 1970s is still happening now.

This body of work explores the space between the individual domestic labour and society’s economic workplace through the lens of a personal story of a newly-married woman who finds herself temporarily out of work. She marks time through the act of housework.

Olivier met the artist at Visual Artists Ireland’s Speed Curating event at IMMA in August 2016. Since then the artist has become an AGA member (Associate Gallery Artist) of the Olivier Cornet Gallery.