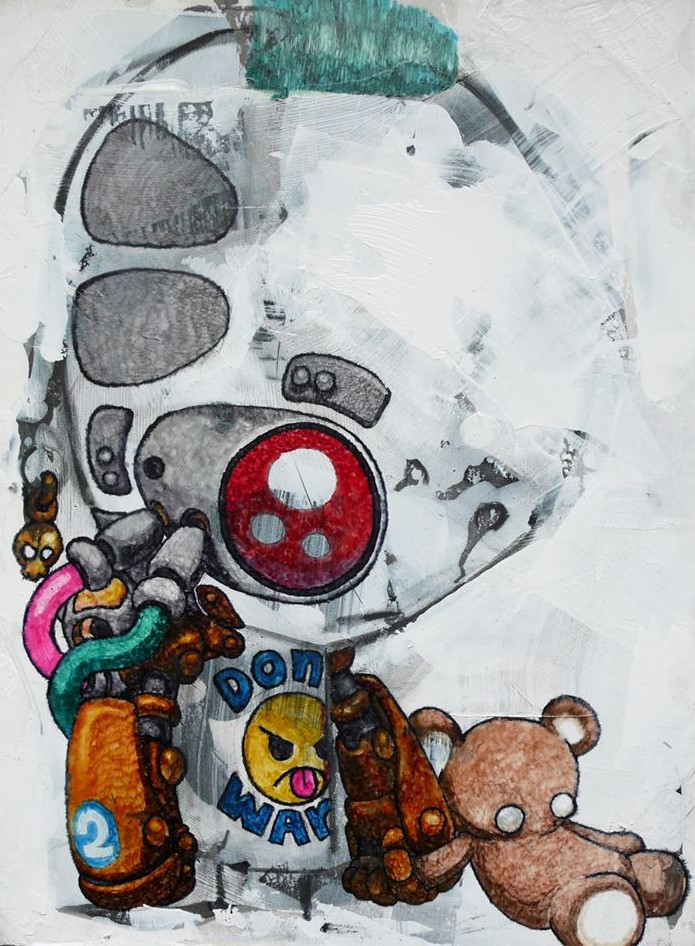 The Olivier Cornet Gallery is delighted to present ‘Things are going to slide’, a two-person exhibition by Mark Doherty and Kelly Ratchford.

“We all need our bed time stories. Kelly Ratchford and Mark Doherty give us theirs. Stories through characters they carve and let out to face us. This time the two makers slid into each other’s workshops like partnering Gepetto-s casting a critical eye on the world. And they created their own worlds.

The tool that I grab to weave my way into Mark’s work is the concept of ‘system’. For Kelly’s mug shots (or portraits?), it’s ‘uniqueness’ and ‘individuality’. The system of the one’s methodically weaved armies seems to absorb and crush uniqueness. Yet the unique creatures of the other also appear crushed or vulnerable but somehow, as if by self-producing miracle, pulling through, making their way through some invisible but no less powerful system. No matter how I try to resist the notion, I can’t help seeing them as heroic figures, facing and making choices, resisting others making decisions for them.

People making decisions for other people is a condition we face a lot in our societies and the sub-worlds we allow to be built in them. When faced with Mark’s world (or worlds), questions about free will, agency and relations of power creep up. Who is who, who is what, who decides, is anyone free, does the concept of freedom exist within the system? As is the case in language, systems have to do with entities, architectured hierarchies, rules governing relations, but also change: a history can be tracked, a future can be conceived. Or are we already in the future? Why do people need masks to breathe and are Kelly’s little persons freer without them or more exposed?

The two artists exchanged uncompleted works for the other one to finish and possibly produce some magic answers or re-feed their systems. At the time of writing I have still not seen the outcomes and I am left wondering how Mark’s sharp line, detailed equipment, supervision engineering, mythologies, use of language and signs will play out along with the shyly declared individuality of Kelly’s characters. It’d be like letting an outsider into a Lanthimos film.

“Reading” Mark’s work is not unlike learning a language, where meanings are to be identified and relations to be recognized. It was a real challenge when he invited me to identify his characters and their environment. Relationships that amount to “of” and “about” are not ones I readily enter into when it comes to visual art, or indeed any art. And yet, I gradually came to realise that the ‘of’ and the ‘about’ in our encounter with Mark’s world(s) become part of the ‘in’, the big in we look for in art works, where thinking and feeling become one. When, last year, I coincidentally adopted a work of each artist at the same time, it was intriguing linguistic games and intellectual play that attracted me to the one and feeling that pushed me to the other: the type of feeling that sometimes makes you shout: “Well done little one!” And there are so many little ones. One wonders how Kelly manages to create so many and make them all so unique. Like a loving teacher with a magic knowledge of all her students’ personality, past and future, deeds and misdeeds. Yet it is among Mark’s pieces that you’ll find a classroom, where uniqueness hides under uniforms and breathing masks, where curtains, signs and symbols frame the individuals.

I imagine Kelly’s troubled young people – maybe one fixing her (or his?) pearls, the other one coming out of court – sliding into Mark’s world and meeting his own troubled souls, putting their exoskeletons on, freeing them of their helmets, confusing their masters, plotting with them, troubling the waters, restoring agency…

This is a show that does that to an adult.”

Image: a collaborative piece by the two artists.

A selection of images can be seen on http://www.oliviercornetgallery.com/#/exhibitions-things-are-gonna/4593784821