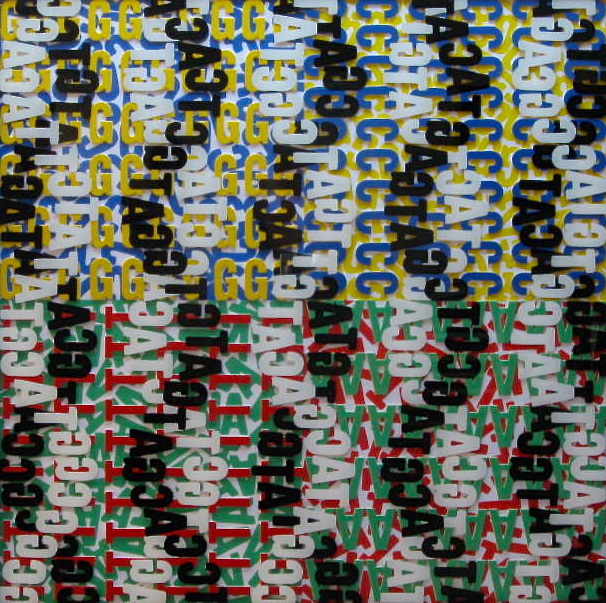 tije domburg (amsterdam, nl, 1947) made after leaving the rietveld academie (1968-1973) a number of years only ceramic forms.white objects and wall reliefs: always composed of several basic shapes like cylinders and blocks.

in the eighties of last century the reliefs were only in white paper. in series were -again- light and schadow, rhytm, and parsing and build elements examined.
it is always in those reliefs about the planning and construction of large numbers of small elements/blocks where “the whole is more than the sum of its parts”.
the sober constructivist-like works have also often a somewhat lyrical undertone.

around 1990 the need for planning and sequencing of large numbers translates literally in figures and numbers.
the figure as building element, but as well as symbol to express the infinite and elusive reality.
“the power of the number”. at the same time did also color her appearance in his work.

and since about 2000 the four letters acgt (representing the bases from which dna is built) are the new building blocks for a number of colorful tableaux. tije domburg is through a number of years fascinated by the investigations surrounding -with namely- the human genome and the data and expectations that arise from it. he has since been working with the imagination of his personal genome, actually a dna-selfportrait, in an (infinite) set of tableaux which he hopes to complete around 2114 (no typewriting error).
the 3 billion bases of the human genome; the 160 billion bases of the locust; the more than 6,000 genes in yeast; the approximately 23,000 genes of ourselves……..and all that expressed in these 4 letters…….acgt.the developments surrounding the dna-investigations are the reason, the fuel that drives the artistic engine.

a message about the discovery of the bacterium arsenic; about the lack of empathy if somewhere in the dna an ‘a’ is in the place of a ‘g’; the stemm cel research; the development of artificial dna; the discovery that the dogfish appears not to have hoxc-genes…….they all are fresh impetus to organize and structure; resulting in an ever-growing selfportrait. he is after all a lyrical constructivist, and the double helix remains a wonderful constructivist form.

the free work of eddy stikkelorum (the hague, nl, 1955) consists of sculptures/objects made of modern materials as polyester, laminated wood, perspex and epoxy. he exhibits regularly and is currenty represented by gallery 9 (nine) in amsterdam (nl).
eddy stikkelorum distinguishes himself on two important issues of other autonomous artists.

on the one hand because of his total distance of reference; conceptual, political and commercial. he does not want his objects to evoke any association with his reality. when this does happen, he destroys the work.

his aim is that his work evokes feelings in the spectator without associations with something else; it is the object itself that counts.though associations by the spectator are not always avoidable. in the past sometimes he used titles. that is history now; a lot of his work now bears the predicate ‘untitled’ (or just has a relation to the time the work was created).

on the other hand it is his enormous technical knowledge of modern materials which distinguishes him from others.
it has also earned him other functions in the past.
for 10 years he was a teacher in sculpture and modern sculpture techniques and held several advisory functions in business and government.

meanwhile eddy stikkelorum has found his way to new york.
on the one hand because this city is the ‘mecca’ of the arts; on the other hand because it feels like his ‘coming home’.
recently he is represented in new york by gallery michelle mariaud.