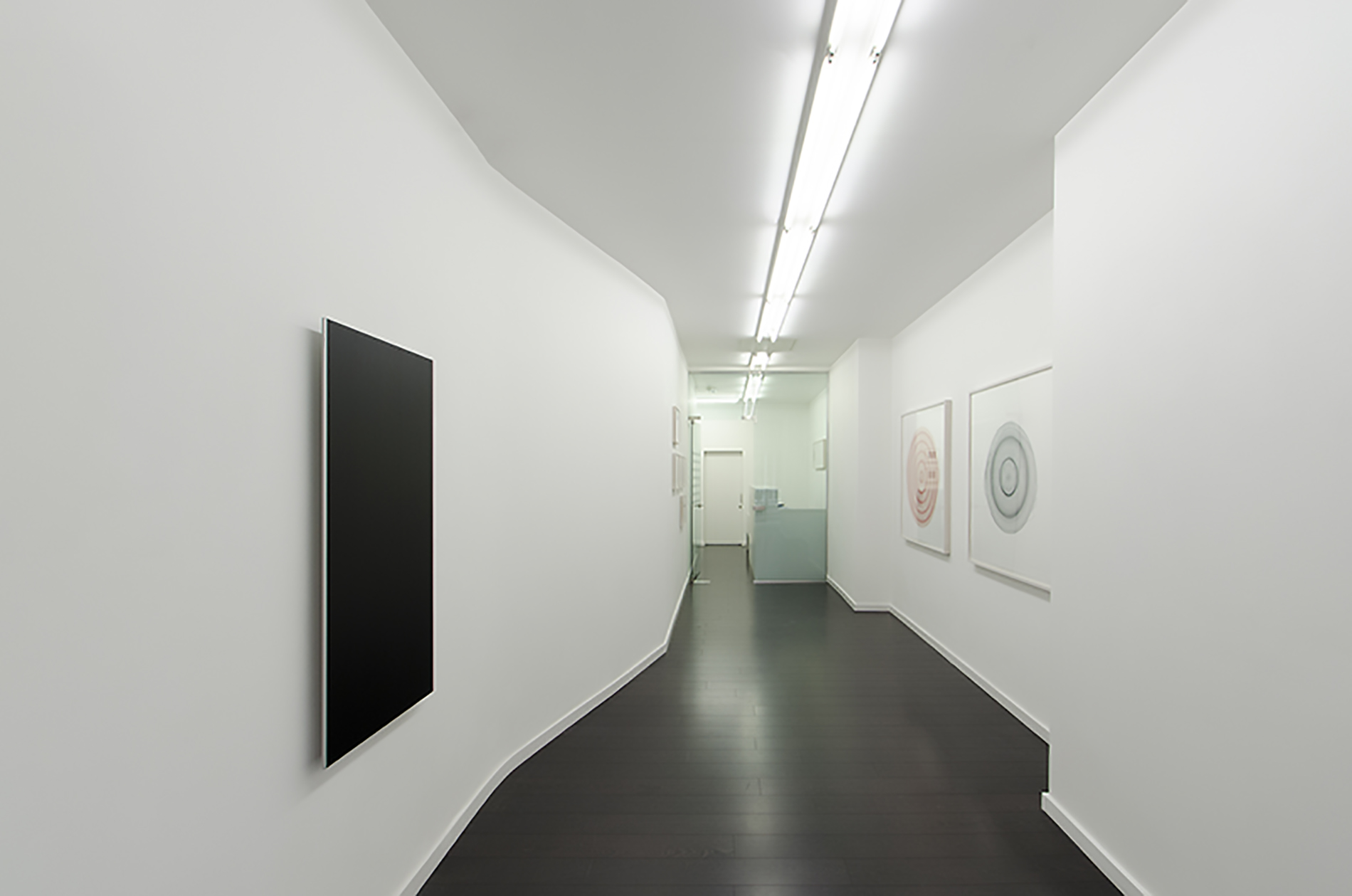 The final exhibition in a series of three group-exhibitions marks the gallery's 15th anniversary. Time Shift features three artists’ work which was inspired by the 2004 Exhibition, Singular Forms (Sometimes Repeated) at the Guggenheim Museum in New York. Singular Forms examined the motive toward reduction, restraint and lucidity in postwar art, three aspects concerned in the work of gallery artists Jill Baroff. Stefana McClure and Frank Gerritz. Singular Forms (Sometimes Repeated) has also been a fundamental influence in the overall programing at Bartha Contemporary over the past 10 years.

Rauschenberg’s interest in viewer participation was developed alongside his all-white paintings from 1951; this influenced a younger generation of painters and sculptors exploring art's materiality and its physical presence in the world. Two essential factors in the development of contemporary art were the elimination of all unnecessary details to achieve an art of pure, essential form and the attention to issues of perception, viewing context, and bodily engagement. Whether it is the Japanese gampi paper used in Baroff’s drawings, the layering process in Stefana McClure’s coloured transfer paper drawings or the reflective properties and divided surface’s of Gerritz’s works, all artists’ are greatly concerned with materiality in particular.

A guiding compositional principle is evident in both Baroff and McClure’s works; artists associated with Minimalism often relied on mathematical means such as a grid or serial repetition. Although the initial idea behind this process was to annul any sense of illusion, this action is intertwined with the notion of restraint. The idea of reduction has allowed art to veer away from art as a representation of an aspect of reality, through the language of reduction the artist has enabled the viewer to only respond to what they see in front of them. There is no landscape or portrait; the birth of Minimalism challenged the existing structures of making and viewing art.

Baroff’s Tide and Midnight Drawings have an indirect, contemplative and conceptual way of looking at arduous, scientific information. Although she uses pared- down design features typical of minimalist practitioners, Baroff’s drawings don’t give anything away expect a faint pencil scribble indicating from which place the information was drawn from that created these meticulous drawings. Baroff’s Tide drawings enable us to visualize mathematical data, the numbers which essentially mean nothing to the untrained eye are transformed into intricate compositions which allow the viewer to envision a natural phenomenon that goes largely unnoticed but is a continuous change on a global scale. This formal clarity begins from detailed tide tables the artist collates from the Internet, usually focusing on specific areas that can be viewed via the web. These websites that constantly record the changing water levels for time intervals as short as a couple of minutes, serve the Baroff as a basis for her work.

Initially the artist used blue ink to draw her drawings but over time this became a problem due to the literal connection between the colour and water, Baroff mostly uses black and red. However, gampi paper has been a big part of her practice since the early 90s, traditionally made in Japan, this extremely thin but unbelievably strong paper is used in all of Baroff’s drawings. The final part of her process; mounting the drawing onto heavy cardboard is the most nail biting action. To adhere the cut out image on gampi paper to the cardboard, the piece must be submerged in water, which is laced with starch. This risky act concludes the working process while temporarily exposing the work to the element whose ceaseless coastal rise and fall the Tide Drawings reflect.

Stefana McClure’s Films on Paper series shows a succession of superimposed subtitles, inter-titles or closed captions depicting entire movies. These are concentrated and concealed in two bands at the bottom of an otherwise uninterrupted monochromatic field. Films on Paper are produced through McClure inscribing subtitles onto reversed coloured transfer paper (colour dependent on appropriation) this process is then repeated until every subtitle is layered on top of the other, leaving evidence of some disruption, abstract yet encompassing. Hours of translated dialogue are reduced to an ephemeral formation, dense in the middle but fading towards the edges. The hypersensitivity and intrinsic memory of the transfer paper enables these multi-layered works to become palimpsests with the iridescent glow of high tech video screens.

McClure’s recent works feature the Chinese “Monkey King” myth, an iconic manga series created by the legendary Akira Toriyama. Manga (Dragon Ball drawings) are created using the same self- structuring methodology McClure uses to create other works on transfer paper. The visual form is determined through the process by which the work is created. These drawings remove all the text from the Manga comic strip, ensuring the information is formatted precisely as it appeared in the comic. Just as her Films on Paper series work on a rich monochromatic field, so do the Manga (Dragon Ball drawings). More dissipated than the Films on Paper series, Manga (Dragon Ball drawings) continues to hold an immense amount of information, in each single image. McClure’s attention to detail and reductive qualities in her work allow her audience to engage on a number of levels.

Gerritz’s work holds temporal qualities through the effect it has on the spectator. The layers of pencil or paintstick applied to anodized aluminum or MDF panel’s forms a metallic sheen, which in turn creates a highly dense surface, resulting in the viewers’ awareness of personal reflection, depending on the position of the viewer and the direction of the light. At first glance Gerritz’s works appear flawless, they seem to reject the handmade in favor of anonymous, industrial production, a fundamental quality of minimalist art. Upon further inspection it is clear that his precise craftsmanship allows this initial disillusion but it is then clear that it is his precision and composition that is extremely refined but it is recognizable that these pieces are created by hand.

Frank Gerritz’s early works focused on the dialogue between volumes, masses and flat surfaces in the space shared with the viewer.

PLEASE NOTE: FROM JULY 25 BY APPOINTMENT ONLY!