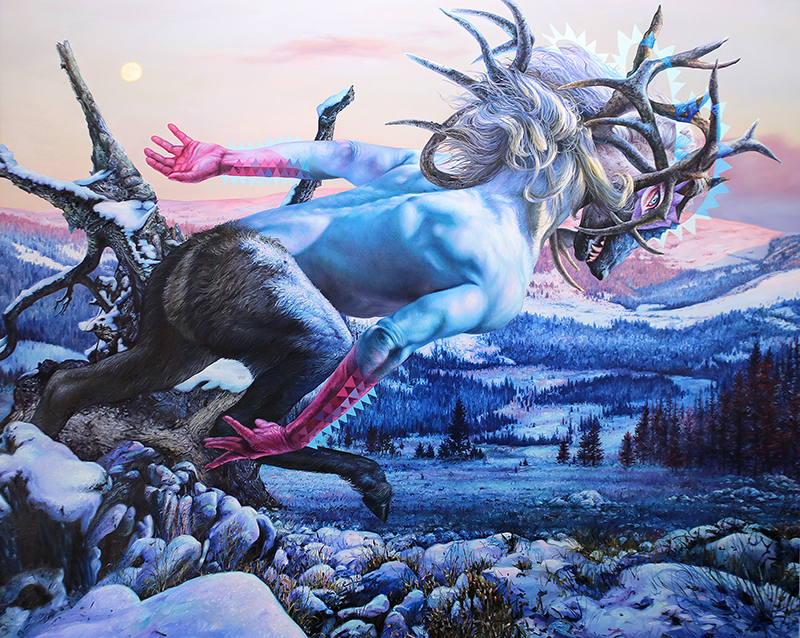 ”Transfigured Night” Press release  On August 14th Gallery Poulsen opens the doors to the second solo exhibition with talented American Artist Angela Gram ”Transfigured Night”. We have been working with Angela Gram for many years and her fantastic, complex and intriguing universe inscribes itself in the same pictorial narrative which creates the very DNA of Gallery Poulsen.  Angela Gram’s paintings might at first seem mythical and unreal, but they are referring to and reinterpreting complex matters from reality as well as inspirations from myths, literature and art history. We as viewers can immerse into the many layers of the painting and loose ourself in it’s aesthetical roots, as well as reinterpret our own surroundings.  This exhibition is a series of nocturnes where darkness serves as a Romantic perspective in which to explore the natural sublime and the uncanny. Angela Gram is inspired by the infinite biodiversity of nature where the artist’ vision can delve into unknown, otherworldly realms that are serene and terrifying, fantastic and yet strikingly real. Only between these tenuous boundaries of the familiar and the obscure, lies the potential for transformative experience. The surreal creatures in these paintings are meant to embody a transfiguration in darkness, as if they are possessed by the sublime themselves The creature in the title work of this exhibition ”Transfigured Night” is meant to incarnate an experience of the natural sublime, and represent a moment of reality when the individual realizes their transfiguration from an experience of being consumed by the powers of nature.  “The passion caused by the great and the sublime in nature, when those causes operate most powerfully, is Astonishment; and astonishment is that state of the soul, in which all its motions are suspended, with some degree of horror.” -Edmund Burke Angela Gram is highly inspired by the Romantic era, where the sublime was sought after in nature and this quote by Romantic writer Edmund Burke is expressing in words, what Angela is doing with paint.  In the world of today, many of us seek nature for pause, for escape and for calmness, and in a way that can be compared to how the Romanticists sought nature. As Edmund Burke puts it: The sublime causes astonishment, and this is likely the best word describing a viewers encounter with Angela Gram’s work as well. Her work is astonishing. It gives material for reflections and persepctive for each and everyone of us.  Bio:Angela received her BFA from Rhode Island School of Design and MFA from the New York Academy of Art. Her work has been shown throughtout the United States and internationally with Gallery Poulsen in Copenhagen, Denmark. She has done Mural work for the American Museum of Natural History and her paintings have sold to many private collections. Angela has been accepted as an artist in residence by the Terra Foundation for American Art Giverny France and by the Eileen Kaminsky Family Foundation at Mana Contemporary in New Jersey. She has been featured in magazines like Juxtapoz, Hi-Fructose and Booooooom.   Transfigured Night 14.08 – 05.09 2020Vernissage Friday August 14th from 5-8pm  Angela Gram Unfortunately cannot be present at the opening due to travel restrictions in connection with Covid19, but she will be live streaming from her studio at 6 PM to tell about the exhibition and answer questions.Contact the gallery at info@gallerypoulsen.com or phone + 45 33 33 93 96 for further information