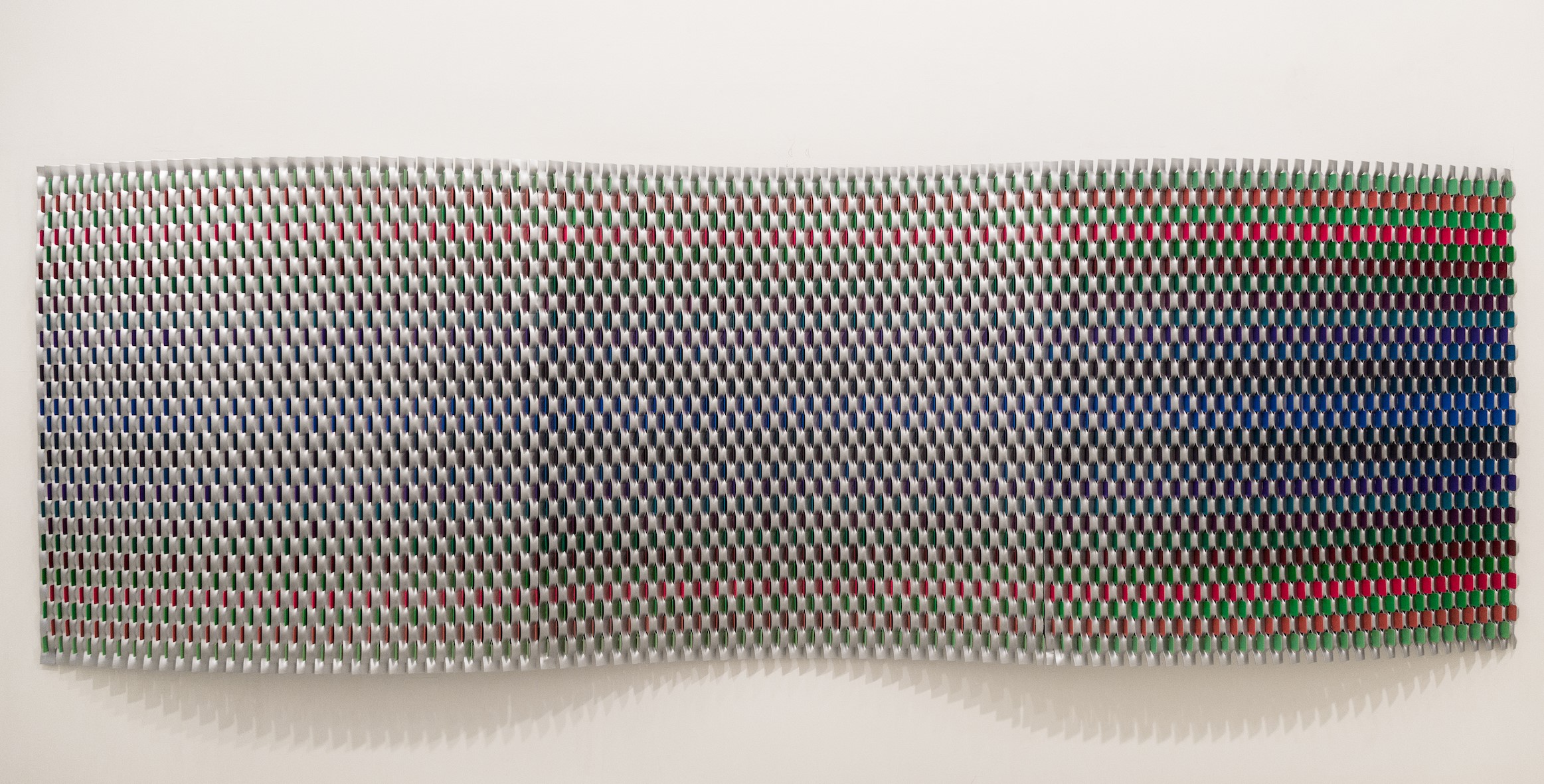 The exhibition Transverse Wave brings Mary Bauermeister and Rashid Al Khalifa together with the sound designer Simon Stockhausen, opening on 16 November 2019 in the me Collectors Room Berlin.

It is precisely these “conditions of experience” that are realized in the exhibition Transverse Wave. Featuring the work of Mary Bauermeister (b. 1934 in Germany) and Rashid Al Khalifa (b. 1952 in Bahrain), the me Collectors Room Berlin presents two artists who were not only socialized in different cultural realms; they also approach their artistic work from opposite ends of the spectrum. Whereas Bauermeister’s work is composed of found, mostly organic materials that nonetheless were previously involved in both natural and social processes, Al Khalifa uses synthetic materials derived from the industrial realm. Because of their consistent, gridded structures and the selected substances, his objects suggest a Minimalist aesthetic with an austere seriality. Bauermeister’s works likewise exhibit constructive processes, but they attempt to organize naturally grown materials; or, as in the case of the “Light Sheets,” chance was the decisive element in creating these structures.

Another “difference between the arts,” or more specifically “the senses,” is created by the composition by Simon Stockhausen (b. 1967 in Germany). The composer, musician, and sound designer developed a commissioned work for the exhibition space that relates specifically to the site, the artworks, and their hanging. Via a total of six loudspeakers, a musical field is generated that not only responds to the objects in the room but also reflects their constructive principles.

Here, the envisioned “diagonals” in the exhibition space are of special significance: visitors can imaginarily divide the room from one corner to the opposite one, such that one side focuses on the art of Bauermeister and the other on the works by Al Khalifa. This partitioning doesn’t have a separating quality, since it takes place in a shared exhibition space and, moreover, is only imagined. The direct confrontation and thus the visual interaction between the artworks in the beholder’s perception is not the only sort of “interrelationship.” Because the sound composition picks up the constructive principles of the works on a symbolic level and makes them drift through the room, an auditive interaction arises on another level. A diagonal in a rectangular space has the advantage of avoiding a strict division of the space into left and right, instead allowing a gentler separation to gradually emerge. Another “interrelationship” in the exhibition is generated by the omnipresent theme of light. While several works by Al Khalifa address and need aspects of light to exist, a number of Bauermeister’s pieces actively project light: the emanations of her Untitled (Light Sheet) are an inherent part of the object’s aesthetics and at the same time have an impact on the appearance of Al Khalifa’s hanging structure Pressure Wave (Mobile Column II).

The title Transverse Wave is a poetic metaphor for the effects to which the exhibition aspires. A “transverse wave” consists of oscillations that occur perpendicular to the direction of energy transfer. Initiated from one side, after an interval it reaches the opposite side, creating a connection that can in turn be imagined in the reverse direction. The principle of the wave and the connection inherent in it doesn’t just occur as light or sound waves; it also recurs in the creation of the material used for the stone reliefs, in the design principles of the artworks, and in the composition’s auditory features.