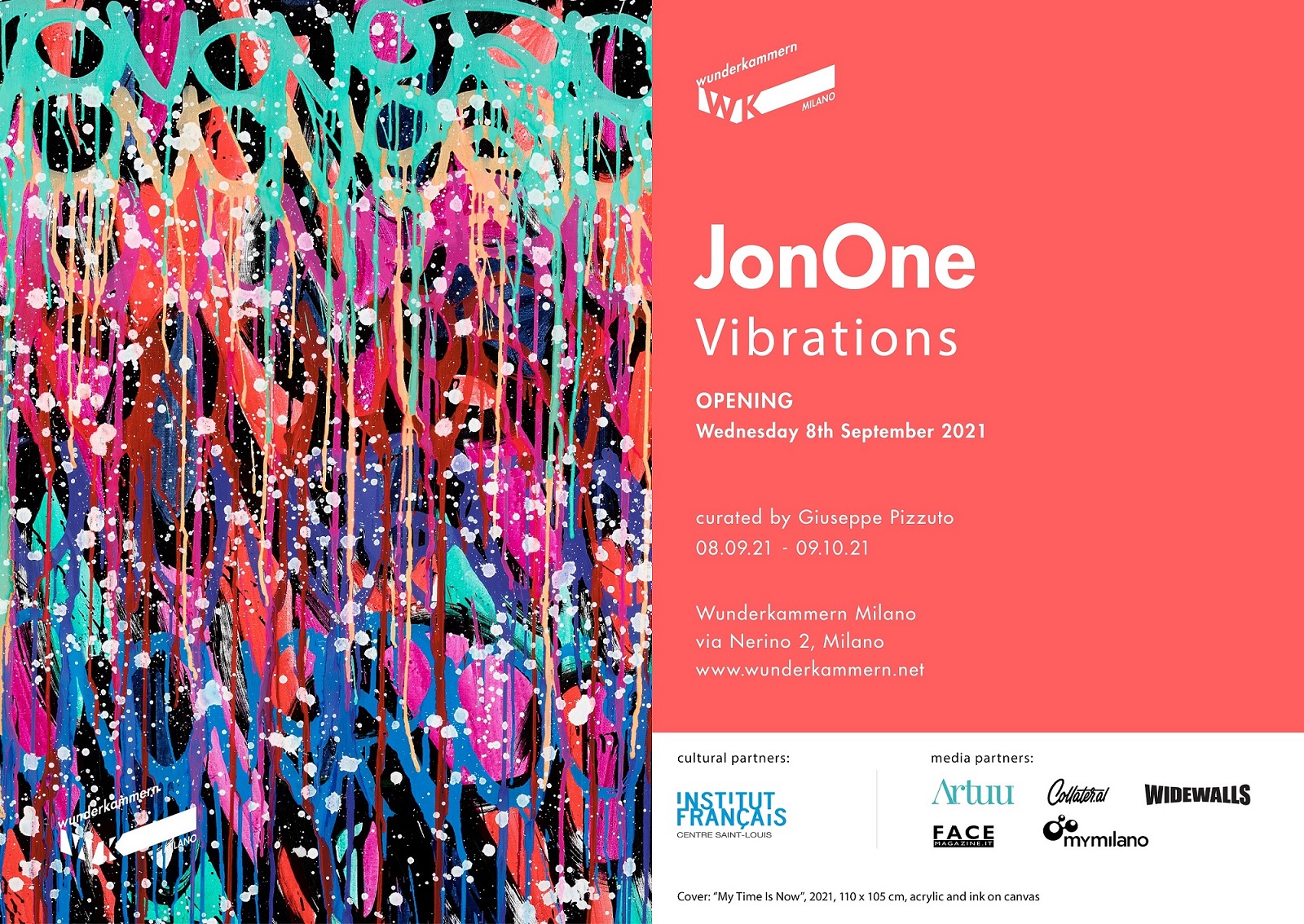 Unseen canvases by the master of street expressionism at the Wunderkammern Gallery until October 9th.

After the solo exhibition Niente Può Fermarmi at Palazzo Velli (Rome, 2018) JonOne returns to Italy. At the Milan venue of Wunderkammern Gallery (2, Nerino street), the energy of John Andrew Perello’s unpublished canvases made especially for the exhibition Vibrations explodes.

John Perello aka JonOne’s aim has always been to make viewers vibrate in front of his works. This is even more relevant now that the world regained a pace of life similar to that before the health crisis. The artist does not let them calmly observe his paintings from left and right, but he desires to surprise their gaze to help them perceive the sensations that art can offer.

Vibrations presents a series of new works that the artist has conceived as veritable explosions of colour. Perello has enclosed within them both the Caribbean chromatic universe of his childhood and the energy necessary to control the flow of gestures required to create his works. What all the canvases in the exhibition have in common is an extraordinary energy, a vibration, an uncontainable thrill that springs from the artist and animates the white surfaces through the pictorial material, the intersection of the lines and the calligraphy. The combination of these elements, if it strikes the right notes, makes the viewer vibrate with emotion.

Vibrations is also a reflection by an established artist on his own identity and on the ability of human beings to look in the mirror, to evaluate their own path in the attempt – not always successful – to remain true to themselves.

In the works exhibited in Milan, in fact, one can glimpse the path of the artist, who mixes New York graffiti and Abstract Expressionism in a very personal language, creating unique canvases full of colour.

John Andrew Perello (New York, 1963) – aka JonOne – was born and raised in Harlem by Dominican parents and by the age of 16 was already tagging his name everywhere, on notebooks, streets, and trains. His first graffiti, signed with the old name Jon156 (his house number), covered the walls of the neighbourhood, challenging and breaking the rules of American society together with the group 156 All Starz, a crew founded by the artist himself in 1984. A few years later he moved to Paris, the city where he currently lives and works, which brought him international success. It was here that his graffiti was finally considered real works of art and earned the right to be exhibited. For several years, in the Hôpital éphémère – the name given to a squat officially established, between 1990 and 1995, in the premises of the Bretonneau hospital -, John opened his first artist’s studio and, in a short time, attracted the attention of curious onlookers and gallery owners. Then, he was able to exhibit in important art galleries and prestigious institutions, such as the Fondation Cartier and the Grand Palais. The artist has also carried out numerous collaborations with various brands and labels of the calibre of Perrier, Lacoste, Guerlain and Air France, but the most important recognition came in 2015, when he was awarded the Legion of Honour by the French Republic and his work “Liberté, Égalité, Fraternité”, inspired by Delacroix’s “Liberty Leading the People”, was exhibited at the Bourbon Palace, home of the Assemblée Nationale.

Wunderkammern Gallery is pleased to invite you to the exhibition. The way of participation will be influenced by the pandemic situation, we invite you to consult our website www.wunderkammern.net, where we will provide all the indications.