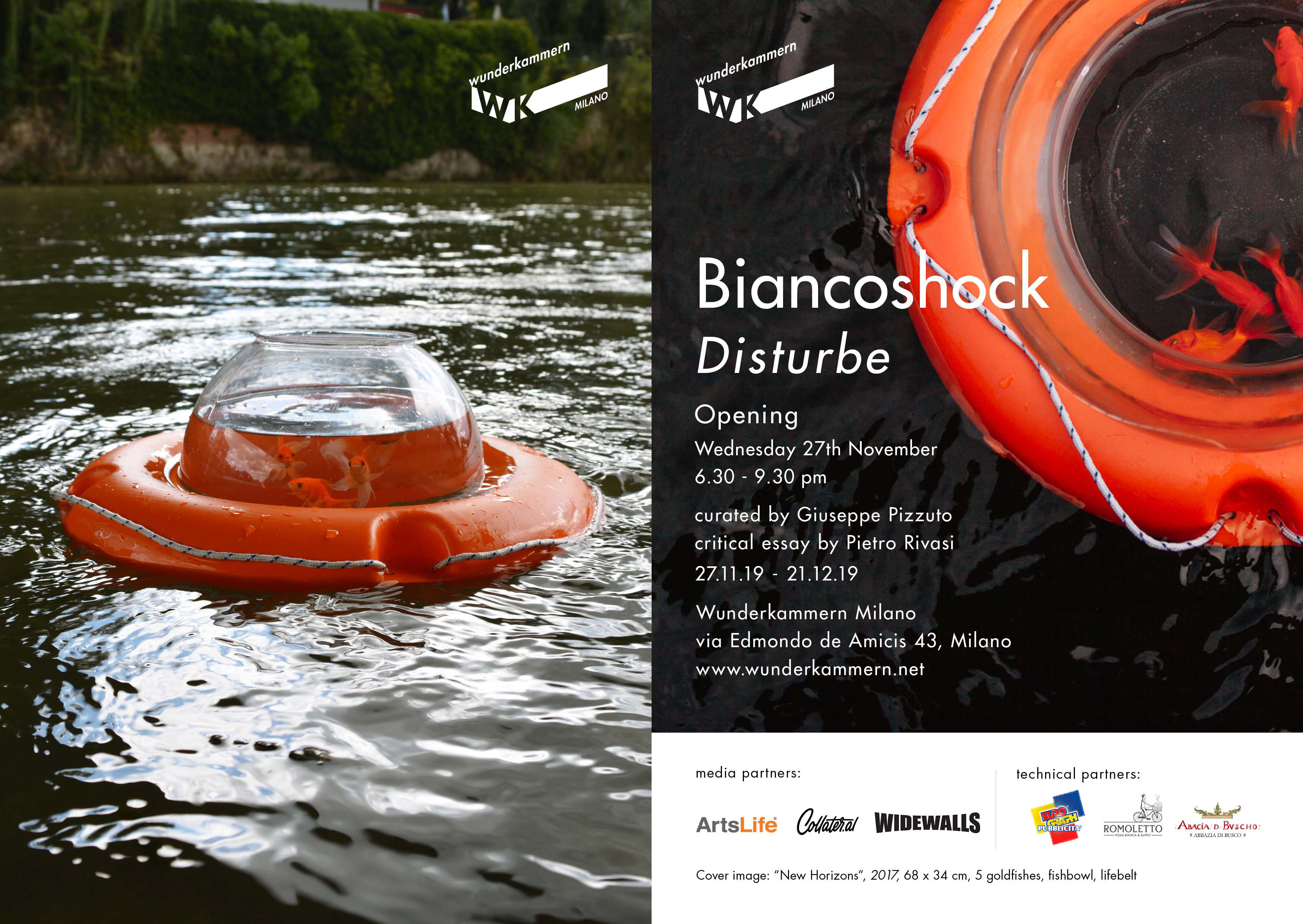 Wunderkammern Milan is pleased to present the exhibition Disturbe, the new solo show by the Italian artist Biancoshock.

Biancoshock (Milan, 1982) is internationally known for his public art interventions: immediate, with a strong visual impact and great media coverage. The city is the field of action for the artist, his works have the purpose of shaking up the routine, of surprising viewers by offering a new starting point for reflection over the reality that surrounds them.

The year 2014 represents a turning point in the artist’s career: after ten years of independent activity, Biancoshock felt the need to give his art a new name, which includes both the Urban element and the performative attitude of his works. He thus founded Ephemeralism, a “non-movement” which indicates all those works of Public Art that exist in space for a very limited period, but last over time thanks to photographic and video documentation. To date, the artist has produced more than a thousand documented works in 27 countries around the world.  In addition to the ironic and disengaged reinterpretation of urban space and to the narration of the world of Writing and of Urban Art in general, Biancoshock’s works deal with more complex issues of current social and political affairs, which highlight the great contradictions of our century, the implications of new technologies and consumer economics on today’s society and the condition of migrants and the homeless.

Biancoshock carries out these themes in an artistic journey characterized by a double vision, which is reflected in his personality and in his name, composed of the words “White” and “Shock”. These two different but complementary realities define the artist’s work: on the one hand “Shock”, the street-based public interventions that made him famous to the general public, immediately recognizable and understandable in their message. On the other hand the conceptual works, more suitable for being exhibited in museums and galleries, which require interpretation and consideration on multiple layers of meaning and which deal with more complex themes, referable to the “White” category, a non-color, a material to be shaped that stimulates in-depth study and experimentation.

To celebrate the fifteenth year of activity of the artist, Wunderkammern presents, in the Milan gallery, Biancoshock’s new solo show: Disturbe. The exhibition retraces all the phases, disciplines and techniques that have characterized the artist’s production to date: installations, documentations of site-specific works created on the street, sculptures, video-performance, props made by the artist, limited edition prints and unique works. The exhibition is aimed at highlighting the multiplicity of techniques, messages and media that characterize Biancoshock’s artistic approach and to highlight the ambivalence of his production in its different levels of interpretation; both the more intimate, conceptual and research dimension as well as the disruptive and universal power of his public interventions born and developed on the street.

During the exhibition Disturbe, Biancoshock will also present his first monograph: Dipolo. The book, published by Wunderkammern and written by the author Pietro Rivasi, presents a selection of works created by the artist between 2004 and 2019, summarizing more than 15 years of research and over a thousand urban installations.