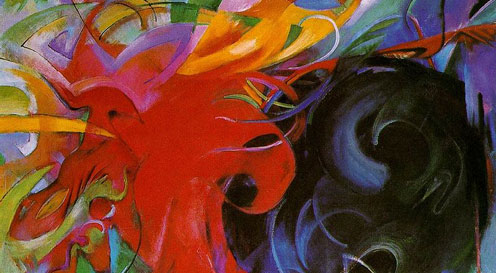 express it all more subjectively

One of several modernist art movements was soon termed Expressionism. Although there is arguably some similarities with post impressionism in France and the Netherlands, expressionism as we know it today originated in Germany at the beginning of the 20th century. Many German Avant-Garde artists created fabulous expressionist works, and the way to approach art soon became popular throughout Europe.

At the heart of expressionism lies the idea that one conveys emotional experience over physical reality. It means that the choice of colours, distortion of perspective and compositional structure of a painting all help fire on all pistons to convey pure emotion. If we heard this as something radical today, we would contain our excitement, but then it was radically new in the Weimar Republic and even provocative later when the Nazis banned it all as ‘degenerate art’.

A lot of twaddle has been extrapolated about expressionism. One example is the claim that it addressed the dehumanising effect of industrialisation and urban sprawl. Certainly, Edvard Munch was a reaction to the dehumanising effects of watching many of his relatives die in Oslo, but it cannot be used as a sweeping generalisation for all artists now considered expressionists.

Expressionist works have a tremendous impact on many of us, and it might have something to do with it all being the individual artist’s expression of how s(he) felt that adds the extra ‘umpf’, rather than the act of pleasing a viewer’s ideas of what the reality ought to look like. It thus comes as no surprise that auctioneers are keen to auction expressionist works off at high prices.

The work was created despite the realities in Europe at the time. In Germany at least, expressionism flourished before the first world war. The time up the first world war was financially strained and many artists lived below the poverty line. WW1 did nothing to improve things, and the years leading up to WW2 was all turmoil and chaos.

Attribution and origin of the art term

The term expressionism was in use already in 1850s without it being pinned to this particular type of art. Then later it has vaguely been attributed to Julien-Auguste Hervé, a Parisian artist otherwise destined to obscurity. Finally the Czech art historian Antonin Matějček used the term in 1910. He used it to connote the opposite of impressionism. Others again, point to the literary strand of expressionism and not just visual arts. For them the defining moment was philosophical novel Thus Spoke Zarathustra (1883-92), by the German philosopher Friedrich Nietzsche.

Rightly so, some people struggle with the idea that expressionism is a separate movement, and point to important overlaps with Futurism, Vorticism, Cubism, Surrealism and Dada.”

The true foundation of expressionism

While the aforementioned attribution proves difficult to determine, most art historians agree that the moment when the movement became professionally organised was in 1905. Four artists formed the art group the Bridge (die Brücke) in Dresden. It was led by Ernst Ludwig Kirchner, and included Fritz Bleyu, Erich Heckel and Karl Schmidt-Rottluff. FOr a a short period the gorup also counted Emil Nolde.

Austrian Egon Schiele, and Norwegian Edvard Munch are considered important Non-german expressionists. Mannerists from various other ages e.g. El Greco (1595-1610) receive mention of being expressionists. The dutch Vincent van Gogh could also be argued to paint in an expressionist way as could the Fauves of Paris. What continously opens up a debate, then, is whether an expressionist is a person living and working with expressionist techniques in the pre ww1 years or a person painting in a highly subjective and expresionist manner. Expressionism has lived on ever since in the last respect and has spread throughout the world as an important way to outer artistic expression. 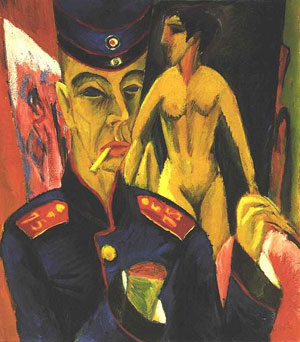 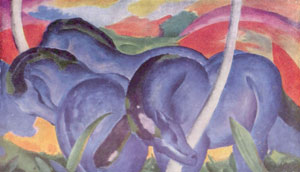 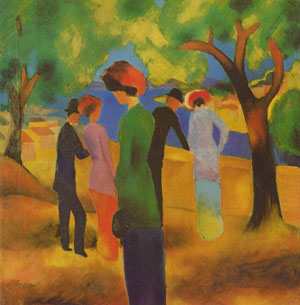