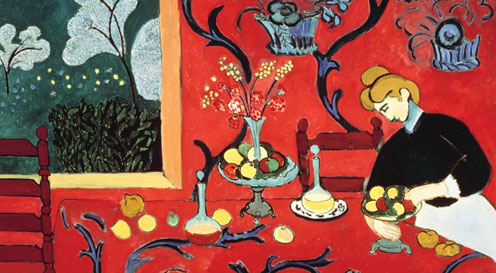 Paint flung in your face

As with other movements in art, Fauvism might not have been a movement if someone from the press had not identified it as such.The defining moment was at Salon d’Automne in Paris in 1905. A loosely formed group headed by Matisse exhibited together. The group had existed for some time —indeed its visionary, Moreau, had been dead for 7 years. But this particular exhibition managed to cause a stir big enough for art critics to express themselves about the group in no uncertain terms.

Specifically, the first of the three exhibitions was covered by journalist Louis Vauxcelles who described the exhibit with a certain headline. The headline alluded to the existing art at the salon having been thrown before the ‘wild beasts’ behind that other weird stuff on display. Thus ‘Les fauves’, or ‘the wild beasts’ became the term coined by one journalist, and the name was then adopted by the group until it slowly and surely ran out of steam somewhere after 1910.

Another critic described the works of art as ‘paint flung into the faces of the beholders’. The flattering press aside, the work was acknowledged and found its patrons in e.g. Leo and Gertrud Stein.

At the time, the style of painting was a clear departure from impressionism by insisting on colour being used more to express emotions, and strokes being simplified and made more abstract. Today, it might appear quite an innocent baby step, but at the time and age it was deemed radical.

In retrospect, Fauvism can be seen as the first real venture out in expressionism, and the impressionism that went before, can be viewed as the preparation for this direction. In fact it appears a natural progression, because impressionism probably would not have occurred if it was not for the advent of photography liberating painting as a popular means of depicting reality — or popular notions of reality. Fauvism is also described as a spin off of Van Gogh’s painting style with strident colours and wild impasto brush strokes.

Artist of the new ism

In addition, Fauvism was international in that the Dutch painter Kees van Dongen was associated with the fauvists as was the Swiss painter Alice Bailly.

Indirectly, Paul Gaugain could be connected with the fauvists because of striking similarities in thought leadership as manifested in painting and written records, though arguably Gauguain was not a member. Georges Braque could also be associated with fauvism. Subsequently the French painter and sculptor joined Picasso in Cubism, which in turn became his legacy and the tag fauvism then sat a little uncomfortable with him amongst art historians.